This is something I learned the other day that I thought was interesting.

So you have some data from experimentation or from a function that is difficult to solve.

Suppose you want to estimate a polynomial curve to that fits the data. Then you could interpolate values between the data points. Let p(x) be the polynomial. The equation for the polynomial we will fit to the data will look like this,

The a are the coefficients in our polynomial. We know x and we want to satisfy the condition,

which, when we want to solve it will take the form,

Where the a’s are our unknowns for which we are solving. Notice something? This is the linear system,

We just have to solve for the a vector to get our coefficients. I quickly wrote this GNU Octave code to try this out,

This is just an extremely simple and slow version of Octave’s polyfit function, except for the order of the coefficients solution vector. I also wrote this function that will take the coefficient vector and a value and do the polynomial interpolation at that point (Octave’s polyval),

Here is an example of my polynomial interpolation function recognizing a parabola,

See how only the quadratic component is left because the zeros cancel out everything else? Here is an example with some added Gaussian noise, imitating data that might be pulled from a scientific experiment,

You can see that the order of our polynomial is too high for the data we are using. The main problem, however, it that the linear system is ill-conditioned. The condition number of the generated X matrix above is 151900, meaning small changes in x result in large changes in the solution. If we step out a bit you can see the polynomial quickly diverge from the given data, 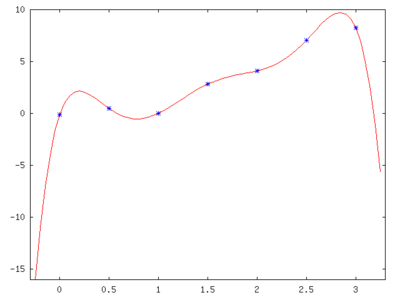 So, I definitely wouldn’t use this for extrapolation.