This was almost 6 years ago now. In my freshman year of college, three of us (Matt Stine and Matt Takach) designed and assembled a dry ice powered potato gun. We got the idea for using dry ice after purchasing some from the famed Penn State Creamery. They sold it for 50 cents per pound, no questions asked. The purpose was for keeping ice cream cold over a long car trip, but they'd sell it to you even if you didn't buy ice cream.

Here is a low-quality video of it in action,

I don't recommend doing this yourself unless you are going to take extreme caution. Like, more caution than we did. We weren't too careful ourselves and were really lucky no one got hurt. The dry ice "bombs" can be very powerful, enough to shatter PVC tubing. We did bring safety glasses with us (but they went mostly unused). We also did this in cold weather, which made things a bit safer.

On to the details, here is a diagram I drew up at the time,

It's just glued PVC tubes and a nail. The bottom of the "blast chamber" had a screw-on cap, which kept getting blown to smithereens. We bought several of those. The original plan also had some wires, connected to some kind of high-resistance wire, so we could control when the gun would fire. That didn't work out.

The "power cell" was a soda bottle with water and dry ice in it. Some brands worked better than others. We had to smash the dry ice into little pieces to get them in the bottle. Dry ice goes in first, then the water, then the cap goes on. After that it's a ticking time bomb, and you want to load it into the gun ASAP. In warm weather you have, maybe, a few seconds. In cold weather it could be 30 minutes.

Yeah, you don't want that in your hand when it explodes.

Once the bottle explodes, there is a lot of pressure behind that potato, so it gets quickly pushed down and out of the barrel. As I said, in that cold weather this could take about 30 minutes. In the video above we were adding warm water to speed up the process. 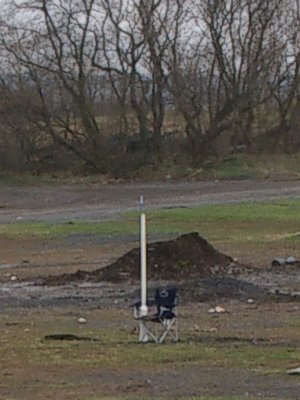 When we fired a golf ball out of the gun straight up in the air, it took about 10 seconds to hit the ground. This put it at maybe 50 m/s (110 mph) barrel exit speed. When launching into the field, we found the potatoes between 150 and 250 meters.

At night we stuck glow sticks in the potatoes so we could watch their entire trajectory. Pretty cool.

Some campus "security" person stopped us on our way home, since carrying a muddy pipe looks suspicious. We told her it was just a potato "cannon", which she told us "wasn't allowed on campus" (yeah, yeah). That's time to just walk away.

Here are some pictures of the construction, and my excessive beard, 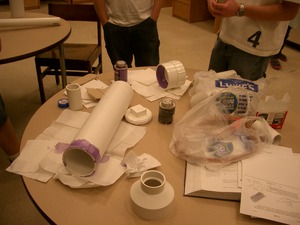 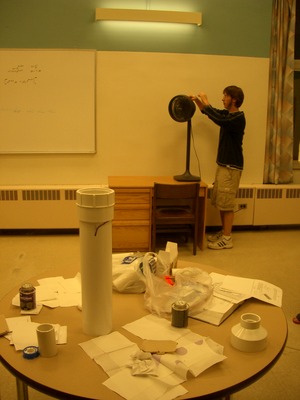 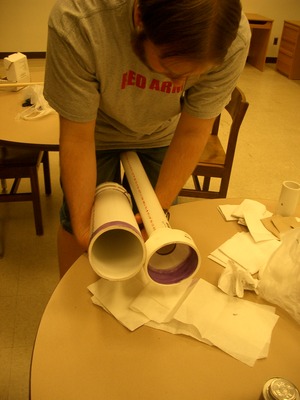 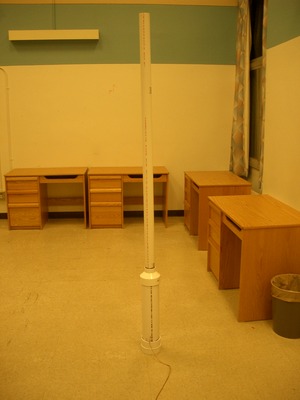 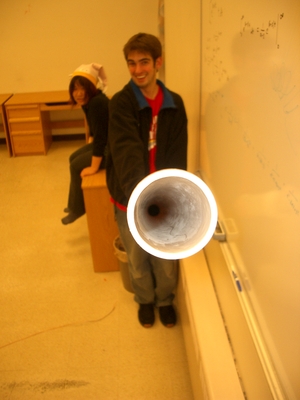