I was thinking recently about how software serial codes might work in proprietary software. They're a self-consistent series of letters and numbers entered during installation. The software can, without phoning home, verify the validity of the code. This sort of thing is just DRM that relies completely on obscurity for security, so it's only a matter of time before the secret is out, breaking the restriction. But it's still fun to speculate about them.

In general, serial codes have these two properties.

Sometimes serial codes are an entire file, one that would take hours to type in by hand, but I'm not considering those right now. They have a trivial solution: use a cryptographic digital signature, because length isn't an issue. The validation algorithm just checks the signature against the key on file.

A digital signature is the obvious solution for a serial code, but to protect these against even the shallowest brute-force attacks it requires using numbers long enough to break criteria #2.

Here's how I would do it. A serial number consists of two parts: a code and a checksum. The code is some random number. The checksum is a number derived from the code.

For my checksum I'm just going to use a hash function: mix the code component and some secret password together, then hash it to produce the checksum. To generate a serial number all we have to do is generate a random number as our code, generate the checksum from it, then encode them together.

Since we want to keep it short, we have to choose how many characters of the serial code to dedicate to each component. It's like a slider we can slide between each side of the encoded serial number. As we allocate more characters to the code component, the density of valid serial numbers in the key space increases. If we go all the way and shrink the checksum to zero characters, then every possible serial number is valid. The denser the valid serial numbers, the easier it is to stumble across one during brute force.

The difficulty of finding a valid serial number by brute force at various split positions is going to look something like this. The exact curve is a function of the checksum algorithm and the knowledge of the attacker. 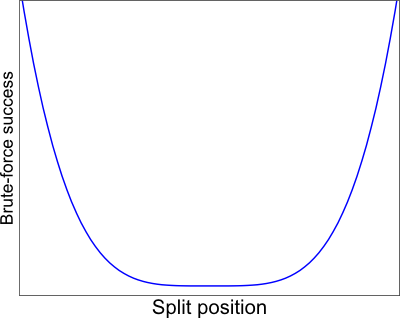 Since it looks like this, I'm just going to split it right in the middle: allocate half the characters to the code and half to the checksum. To begin, I'm going to encode the serial number as hexadecimal digits. First let's define a little bit about what our serial codes look like. I'm going to implement this in my favorite try-stuff language, Elisp.

I decided to use 12 characters, 6 bytes, to represent each component. This makes for a 24-character serial code. A bit long, but we'll use a trick to shorten that later.

Below, first function is just a random number generator. It could be fancier, like the UUID generating function, but this is good enough. The compose function was defined in a previous post.

Next we need a function that accepts these numbers and checks their self-consistency. Simple enough: extract the code component, generate the checksum, and check against the checksum component.

This quick test below always returns true, so it's working at least partially right.

Those serial numbers could be shorter because we're limiting ourselves to 0-9 and a-f. Instead, we could base64 encode the serial numbers to cram more information in each character.

Now the serial codes from serial-gen look like this.

One problem with these is it's easy to mix up the zeros, Os, ones, and ls. A filter could be added to the generator to reject and regenerate any serial number containing these confusing characters, but that's outside the scope of this post.