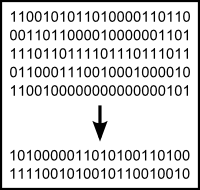 Any developer that uses a non-toy operating system will be familiar with gzip and bzip2 tarballs (.tar.gz, .tgz, and .tar.bz2). Most places will provide both versions so that the user can use his preferred decompresser.

Both types are useful because they make tradeoffs at different points: gzip is very fast with low memory requirements and bzip2 has much better compression ratios at the cost of more memory and CPU time. Users of older hardware will prefer gzip, because the benefits of bzip2 are negated by the long decompression times, around 6 times longer. This is why OpenBSD prefers gzip.

But there is a new compression algorithm in town. Well, it has been around for about 10 years now, but, if I understand correctly, was patent encumbered (aka useless) for awhile. It is called the Lempel-Ziv-Markov chain algorithm (LZMA). It is still maturing and different software that uses LZMA still can't quite talk to each other. 7-zip and LZMA Utils are a couple examples.

GNU tar added an --lzma option just last April, and finally gave it a short option, -J, this past December. I take this as a sign that LZMA tarballs (.tar.lzma) are going to become common over the next several years. It also would seem that the GNU project has officially blessed LZMA.

And not only that, I think LZMA tarballs will supplant bzip2 tarballs. The reason is because it is even more asymmetric than bzip2.

According to the LZMA Utils page, LZMA compression ratios are 15% better than those of bzip2, but at the cost of being 4 to 12 times slower on compression. In many applications, including tarball distribution, this is completely acceptable because decompression is faster than bzip2! There is an extreme asymmetry here that can readily be exploited.

So, when a developer has a new release he tells his version control system, or maybe his build system, to make a tar archive and compress it with LZMA. If he has a computer from this millennium, it won't take a lifetime to do, but it will still take some time. Since it could take as much as two orders of magnitude longer to make than a gzip tarball, he could make a gzip tarball first and put it up for distribution. When the LZMA tarball is done, it will be about 30% smaller and decompress almost as fast as the gzip tarball (but while using a large amount of memory).

At this point, why would someone download a bzip2 archive? It's bigger and slower. Right now possible reasons may be a lack of an LZMA decompresser and/or lack of familiarity. Over time, these will both be remedied.

Don't get me wrong. I don't hate bzip2. It is a very interesting algorithm. In fact, I was breathless when I first understood the Burrows-Wheeler transform, which bzip2 uses at one stage. I would argue that bzip2 is more elegant than gzip and LZMA because it is less arbitrary. But I do think it will become obsolete.

Unfortunately, the confused zip archive is here to stay for now because it is the only compression tool that a certain popular, but inferior, operating system ships with. I say "confused" because it makes the mistake of combining three tools into one: archive, compression, and encryption. As a result, instead of doing one thing well it does three things poorly. Cell phone designers also make the same mistake. Fortunately I don't have to touch zip archives often.

In conclusion, consider creating LZMA tarballs next time, and don't be afraid to use them when you come across them.