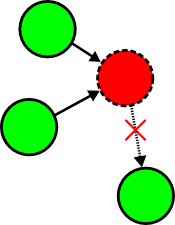 There has been a lot of talk online about the fragility of URL shortening services, particularly in relation to Twitter and its 140 character limit on posts (based on SMS limits). These services create a single point of failure and break mechanisms of the web that we rely on. Several solutions have been proposed, so over the next couple years we get to see which ones end up getting adopted.

There are many different URL shortening services out there. They take a large URL, generate a short URL, and store the pair in a database. Several of these services have already shut down in response to abuse by spammers who hide fraudulent URLs behind shortened ones. If these services ever went down all at once, these shortened URLs would rot, destroying many of the connections that make up the world wide web. This is called the rot link apocalypse, and it has some people worried.

I am not very worried about this, though. I don't use Twitter, or any other service that puts such ridiculous restrictions on message sizes. Nor do I think information on Twitter is very important. Also, this mass link rot will occur gradually, slow enough to be dealt with.

In any case, short URLs may be useful sometimes, especially if a URL needs to be memorized or if the URL is extremely long. Or, it could be used to get around a design flaw in an inferior browser.

One idea that I have not yet seen implemented is simple data compression. When a short URL is needed, a user can apply a compression algorithm to the URL. The original URL can be recovered from this alone, so we don't have to rely on third parties to store any data.

I have doubts this would work in practice, though. Generic compression algorithms cannot compress such a small amount of data because their overhead is too large in relation. Go ahead, try pushing a URL through gzip. It will only get longer. We would need a special URL compression algorithm.

For example, I could harvest a large number of URLs from around the web, probably sticking to a single language, and use it to make a Huffman coding frequency table. Then I use this to break URLs into symbols to encode. The ".com/" symbol would likely be mapped to one or two bits. Finally, this compressed URL is encoded in base 64 for use. The client, who already has the same URL frequency table, would use it to decode the URL.

URLs don't seem to have too many common bits, so I doubt this would work well. I should give it a shot to see how well it works.

We probably need to stick with lookup tables mapping short strings to long strings. Instead of using a third party, which can disappear with the valuable data, we do the URL shortening at the same location as the data. If the URL shortening mechanism disappears, so did the data. The URL shortening loss wouldn't matter thanks to this coupling. Getting the shortened URL to users can be tricky, though.

One proposal wants to set the rev attribute of the link tag to "canonical" and point to the short URL.

However, I don't think this will get far. Several search engines, including Google, have already adopted a rel="canonical" for regular use. It's meant to be placed with the short URL and will cause search engines to treat it as if it was a 301 redirect. This won't help someone find the short URL from the long URL, though. It is also likely to be confused with the rev attribute by webmasters.

The rev attribute is also considered too difficult to understand, which is why it was removed from HTML5.

Another idea rests in just using the rel attribute by setting it to various values: "short", "shorter", "shortlink", "alternate shorter", "shorturi", "shortcut", "short_url". This website does a good job of describing why they are all not very good (misleading, ugly, or wrong), and it goes on to recommend "shorturl".

I went with this last one and added a "short permalink" link in all of my posts. (Removed after changing web hosts.) This points to a 28 letter link that will 301 direct to the canonical post URL. In order to avoid trashing my root namespace, all of the short URLs begin with an asterisk. The 4 letter short code is derived from the post's internal name.

I also took the time to make a long version of the URL that is more descriptive. It contains the title of the post in the URL so a user has an idea of the destination topic before following through. The title is actually complete fluff and simply ignored. Naturally this link's rel attribute is set to "longurl".

Keep your eyes open to see where this URL shortening stuff ends up going.