If you are a crypto-anarchist like me, you should definitely take a look at CipherSaber. It is an extremely simple encryption protocol that even beginner programmers can implement. The protocol can also easily be memorized and quickly implemented from memory on the fly. In the case that cryptography was completely outlawed, CipherSaber would be a useful tool in allowing its users to continue to communicate privately.

I think the name is just perfect and captures everything CipherSaber is about. Here is the description right from the CipherSaber page,

In George Lucas' Star Wars trilogy, Jedi Knights were expected to make their own light sabers. The message was clear: a warrior confronted by a powerful empire bent on totalitarian control must be self-reliant.

CipherSaber is based on the arcfour stream cipher, but goes beyond it by defining the use of an initialization vector (IV) and how it is stored with the ciphertext. There are actually two versions: CipherSaber-1 and CipherSaber-2. The second one exists because of vulnerabilities in the first. The difference between them is small.

You want to make sure you generate a long enough passphrase for your encryption key. A normal password isn't good enough because an adversary will be able to throw all his available processing power at your ciphertext. Using Diceware would be a good idea here.

Here is the protocol. 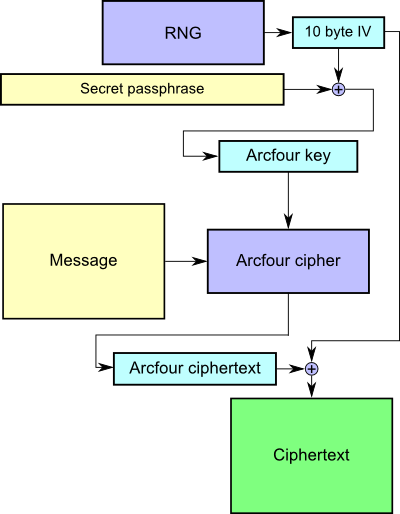 Generate a 10-byte random IV. This need not be done using a very strong random number generator. It is only important that the same IV is not used more than once. Concatenate a secret user selected key (i.e. passphrase) with the IV and use that concatenation as the key for an arcfour cipher. Encrypt the message using the cipher. Concatenate the IV and the arcfour ciphertext to create the CipherSaber ciphertext.

Using a large number of iterations could be considered a form of key strengthening. An adversary who is making a brute force attack on the ciphertext has that much more work to do for each passphrase trial.

You should really implement your own, but here is one of my implementations, written in C. I put it in with the rest of my arcfour stuff. Get it with git,

This is the diagram image above (ciphersaber.png) encrypted with the key "nullprogram". The first one is CipherSaber-1 and the second is CipherSaber-2 with 20 key schedule iterations.