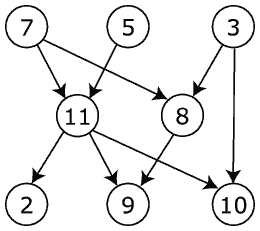 Under Gavin's suggestion, I've been watching The Prisoner, a 1960's British television show. The main character is an ex-spy held prisoner in "the Village", an Orwellian, isolated, enclosed town. No one in the Village has a name, but is instead assigned a number. The main character's number is 6.

As far as I can tell, after number 2 the order of the numbers is not important. Number 56 is no more important than number 12. By using numbers to name things there is an implied ordering, even if the the ordering is insignificant. It could be misleading to a newcomer.

Is there an unordered set could be used to name things? More specifically, is there a set that cannot be ordered? If it is unorderable then there is no implicit ordering to cause confusion. It's easy to have an unorderable set in theory, but I think it is difficult to have in practice.

Using letters is obviously out, as the alphabet has an order. Words and names made of letters can be sorted according to the alphabet. However, the ability to order words is almost never used outside of indexing. If words are used to name things, a newcomer is unlikely to assume relationships based on ordering. No one will assume Alan is more important than Bob.

Large numbers also tend to lack an assumed order. I don't think anyone assumes a larger or smaller social security number has meaning, or a larger or smaller phone number. However, these values are also known to be handed out in some semi-random way.

But can we do better? For at least English speakers, is it possible to create an unorderable set? If the items in the set have a vocal pronunciation, then they can probably be ordered by their phonetics. That could be avoided by using non-standard phonetic components, like clicks and pops, which won't have a standard ordering (in English, anyway).

A set has an order if there is a total, transitive, relational operator for the set. If such an operator does not exist then the set isn't linearly ordered. I want a set that can't easily have such an operator.

If a set of symbols was created, how might they be presented as to show no ordering. The order of the symbols in the original presentation might be considered the ordering, like how the alphabet is always presented in order. A circle could be used, but this is circularly ordered. I think there is also the issue of memorization. A human will have a much better time memorizing the symbols if memorized in some order. For example, try naming all the letters of the alphabet at random, without repeats. Or US states.

Thanks to modern day technology, with dynamic content, the set could be displayed in a random order each time it is viewed. For a web page, the server could select a random order, or a JavaScript program could reorder the images at random.

The penalties incurred by intentionally prohibiting order would likely outweigh the benefit of the set. If it's not orderable, we can't index it, and it's difficult to deal with. I expect it's much easer to just use numbers and tell people that the order isn't important, or just use an obviously unordered set.