I've been looking for a nearby tabletop gaming group for awhile now. I asked people I knew. I asked around at work. I just couldn't find anyone. Luckily, a new thing that Wizards of the Coast has been doing is D&D Encounters where prepared adventures are run every week openly at local gaming stores. The purpose is for casual players or beginners to be able to freely to play some D&D without needing any commitment, preparation, or equipment. Characters are pre-generated, so no spending a half hour creating some new player characters every week.

I hopped into it for season two, which just started 6 weeks ago. Each weekly session is a 1.5 to 2 hour combat encounter. I've been having fun, but honestly it's not all that exciting compared to what a real campaign can bring. There is no role-playing, practically no NPC interaction, no puzzles, and no exploration. It also doesn't help that the adventures and characters are riddled with mistakes and very unbalanced. For an example of unbalanced, the character I've been playing, Barcan (or Barqan depending on where you are in the character sheet), could be killed — and I'm not talking about unconscious dying but negative bloodied value dead — by a monster critical strike in just about every encounter so far. Every time a monster attacked me there was a 1 in 20 chance, even at full health, that I might be done playing for the week.

But the great part is that it got me connected to other players in my area, which I think is the most valuable part of Encounters. One of my fellow players was just starting a regular gaming group and invited me to come along, so we've been playing on weekends now, with the intention of taking turns as the DM among those who are interested. And for a little irony, everyone except one person in the group also works at the lab. I guess I didn't ask around enough!

So I'm going to be DMing a 4e Dungeons and Dragons campaign sometime in the near future, and I'm quite excited about it!

Anyway, what does that have to do with drawing a space elevator in the GIMP? First of all, if you're one of the players in my group who found their way here stop reading now. You'll find out all this in the first session, so come back after that. So, I've had this campaign idea in my head for a couple of years now, and it involves a skyhook of sorts constructed by a combination of careful engineering and powerful arcane magic. It leads somewhere, not space, but somewhere. Since that somewhere is part of the mystery I won't reveal where that is, but if the campaign goes well I'll write about it more in the future.

When I run the first session I want to illustrate the skyhook to the players. Show, not tell they say. I like some of the work people do imitating Bob Ross in the GIMP. I've done a few of these to try it out, and it's surprising how well it can turn out even from a beginner. I employed this new art education to draw my skyhook for my game. The GIMP undo history reveals how I did it, 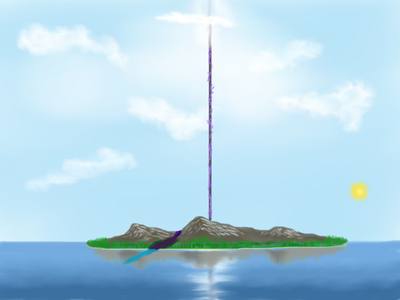 In retrospect I should have drawn the skyhook right after I finished those first clouds, since it's behind everything else in the scene. Oh, and that thing on the bottom left is a twisted scar left behind from a previous attempt at building the skyhook, but it collapsed. It's a dangerous place to be.