Update February 2013: Java Applets are a dead technology and using a Java web browser plugin is simply much too insecure. I strongly recommend against it. This applet page has since been moved to a more generally-named URL.

Because the two projects I announced over the weekend can be used as Java applets, I went back and upgraded two older projects so that they could also behave as interactive applets. Now that I have several applets to show off I've collected them together onto a "Java Applet Demos" page. 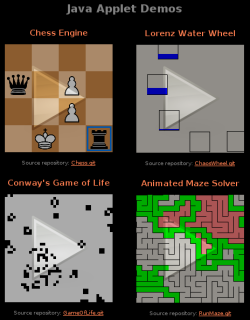 I intend on expanding this in the near future with improvements (Michael is unhappy with my integration function on the water wheel, for one) and new applets while I'm on a roll. Swing is my oyster.