Try Out My Java With Emacs Workflow Within Minutes

Update January 2013: I’ve learned more about Java dependency management and no longer use my old .ant repository. As a result, I have deleted it, so ignore any references to it below. The only thing I keep in $HOME/.ant/lib these days is an up-to-date ivy.jar.

Last month I started managing my entire Emacs configuration in Git, which has already paid for itself by saving me time. I found out a few other people have been using it (including Brian), so I also wrote up a README file describing my specific changes.

With Emacs being a breeze to synchronize between my computers, I noticed a new bottleneck emerged: my .ant directory. Apache Ant puts everything in $ANT_HOME/lib and $HOME/.ant/lib into its classpath. So, for example, if you wanted to use JUnit with Ant, you’d toss junit.jar in either of those directories. $ANT_HOME tends to be a system directory, and I prefer to only modify system directories indirectly through apt, so I put everything in $HOME/.ant/lib. Unfortunately, that’s another directory to keep track of on my own. Fortunately, I already know how to deal with that. It’s now another Git repository,

With that in place, settling into a new computer for development is almost as simple as cloning those two repositories. Yesterday I took the step to eliminate the only significant step that remained: setting up java-docs. Before you could really take advantage of my Java extension, you really needed to have a Javadoc directory scanned by Emacs. The results of that scan not only provided an easy way to jump into documentation, but also provided the lists for class name completion. Now, java-docs now automatically loads up the core Java Javadoc, linking to the official website, if the user never sets it up.

So if you want to see exactly how my Emacs workflow with Java operates, it’s just a few small steps away. This should work for any operating system suitable for Java development.

Let’s start by getting Java set up. First, install a JDK and Apache Ant. This is trivial to do on Debian-based systems,

On Windows, the JDK is easy, but Ant needs some help. You probably need to set ANT_HOME to point to the install location, and you definitely need to add it to your PATH.

Next install Git. This should be straightforward; just make sure its in your PATH (so Emacs can find it).

Clone my .ant repository in your home directory.

Except for Emacs, that’s really all I need to develop with Java. This setup should allow you to compile and hack on just about any of my Java projects. To test it out, anywhere you like clone one of my projects, such as my example project.

You should be able to build and run it now,

If that works, you’re ready to set up Emacs. First, install Emacs. If you’re not familiar with Emacs, now would be the time to go through the tutorial to pick up the basics. Fire it up and type CTRL + h and then t (in Emacs’ terms: C-h t), or select the tutorial from the menu.

Move any existing configuration out of the way,

Then run Emacs. You should be greeted with a plain, gray window: the wombat theme. No menu bar, no toolbar, just a minibuffer, mode line, and wide open window. Anything else is a waste of screen real estate. This initial empty buffer has a great aesthetic, don’t you think? 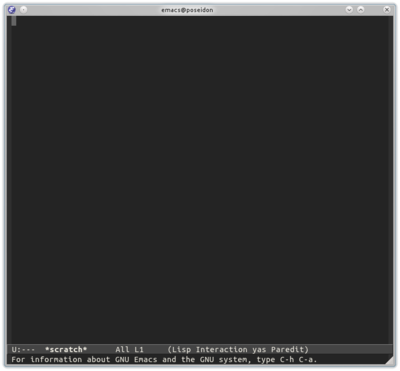 Now to go for a test drive: open up that Java project you cloned, with M-x open-java-project. That will prompt you for the root directory of the project. The only thing this does is pre-opens all of the source files for you, exposing their contents to dabbrev-expand and makes jumping to other source files as easy as changing buffers — so it’s not strictly necessary.

Switch to a buffer with a source file, such as SampleJavaProject.java if you used my example project. Change whatever you like, such as the printed string. You can add import statements at any time with C-x I (note: capital I), where java-docs will present you with a huge list of classes from which to pick. The import will be added at the top of the buffer in the correct position in the import listing.

Without needing to save, hit C-x r to run the program from Emacs. A *compilation-1* buffer will pop up with all of the output from Ant and the program. If you just want to compile without running it, type C-x c instead. If there were any errors, Ant will report them in the compilation buffer. You can jump directly to these with C-x ` (that’s a backtick). 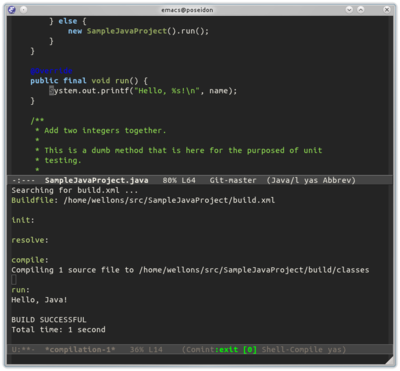 Now open a new source file in the same package (same directory) as the source file you just edited. Type cls and hit tab. The boilerplate, including package statement, will be filled out for you by YASnippet. There are a bunch of completion snippets available. Try jal for example, which completes with information from java-docs.

When I’m developing a library, I don’t have a main function, so there’s nothing to “run”. Instead, I drive things from unit tests, which can be run with C-x t, which runs the “test” target if there is one. 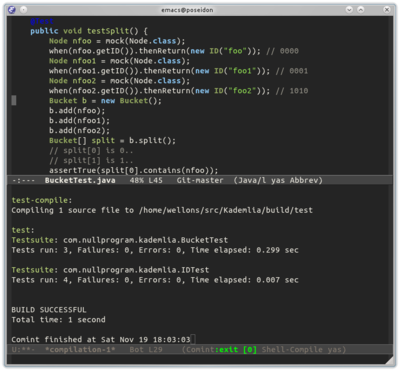 To see your changes, type C-x g to bring up Magit and type M-s in the Magit buffer (to show a full diff). From here you can make commits, push, pull, merge, switch branches, reset, and so on. To learn how to do all this, see the Magit manual. You can type q to exit the Magit window, or use S-<arrow key> to move to an adjacent buffer in any direction. 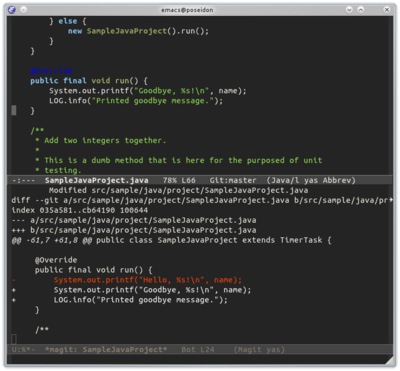 And that’s basically my workflow. Developing in C is a very similar process, but without the java-docs part.