At work I’ve recently been generating viewsheds over DTED sets. Earlier this week I was asked to give an informal presentation on what I was doing. I wanted some terrain that demonstrated some key features, such as vision being occluded by hills of varying heights. Rather than search through the available DTED files for something good, I opted for generating my own terrain, using an old trick of mine: my noise “cloud” generator. That’s a lesson in the usefulness of maintaining a blog. The useful things you learn and create are easy to revisit years later!

I generated some noise, looked at it with surf(), and repeated until I found something useful. (Update June 2012: the function is called perlin() but it’s not actually Perlin noise.)

The generated terrain is really quite rough, so I decided to smooth it out by convolving it with a 2-dimensional Gaussian kernel.

It still wasn’t smooth enough. So I repeated the process a bit,

Perfect! I used that for my presentation. However, I was having fun and decided to experiment more with this. I filtered it again another 1000 times and generated a surf() plot with a high-resolution colormap — the default colormap size caused banding.

It produced this beautiful result! 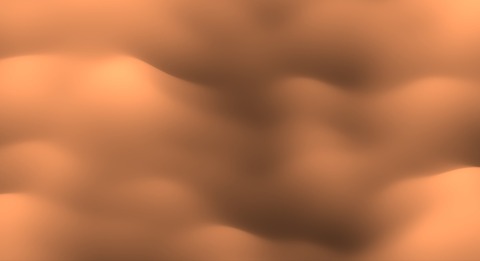 I think it looks like a photograph from a high-powered microscope, or maybe the turbulent surface of some kind of creamy beverage being stirred.

At work when I need something Matlab-ish, I use Octave about half the time and Matlab the other half. In this case, I was using Matlab. Octave doesn’t support the EdgeAlpha property, nor the viewshed() function that I needed for my work. Matlab currently makes much prettier plots than Octave.