Making Your Own GIF Image Macros

This tutorial is very similar to my video editing tutorial. That’s because the process is the same up until the encoding stage, where I encode to GIF rather than WebM.

So you want to make your own animated GIFs from a video clip? Well, it’s a pretty easy process that can be done almost entirely from the command line. I’m going to show you how to turn the clip into a GIF and add an image macro overlay. Like this,

The key tool here is going to be Gifsicle, a very excellent command-line tool for creating and manipulating GIF images. So, the full list of tools is,

Here’s the source video for the tutorial. It’s an awkward video my wife took of our confused cats, Calvin and Rocc.

My goal is to cut after Calvin looks at the camera, before he looks away. From roughly 3 seconds to 23 seconds. I’ll have mplayer give me the frames as JPEG images.

This tells mplayer to output JPEG frames between 3 and 23 seconds, doing it as fast as it can (-benchmark). This output almost 800 images. Next I look through the frames and delete the extra images at the beginning and end that I don’t want to keep. I’m also going to throw away the even numbered frames, since GIFs can’t have such a high framerate in practice.

There’s also dead space around the cats in the image that I want to crop. Looking at one of the frames in GIMP, I’ve determined this is a 450 by 340 box, with the top-left corner at (136, 70). We’ll need this information for ImageMagick.

Gifsicle only knows how to work with GIFs, so we need to batch convert these frames with ImageMagick’s convert. This is where we need the crop dimensions from above, which is given in ImageMagick’s notation.

This will do four images at a time in parallel. The +repage is necessary because ImageMagick keeps track of the original image “canvas”, and it will simply drop the section of the image we don’t want rather than completely crop it away. The repage forces it to resize the canvas as well. I’m also scaling it down slightly to save on the final file size.

We have our GIF frames, so we’re almost there! Next, we ask Gifsicle to compile an animated GIF.

I’ve found that using 32 colors and dithering the image gives very nice results at a reasonable file size. Dithering adds noise to the image to remove the banding that occurs with small color palettes. I’ve also instructed it to optimize the GIF as fully as it can (-O2). If you’re just experimenting and want Gifsicle to go faster, turning off dithering goes a long way, followed by disabling optimization.

The result is this 6.7 MB GIF. A little large, but good enough. It’s basically what I was going for. Next we add some macro text.

In GIMP, make a new image with the same dimensions of the GIF frames, with a transparent background. 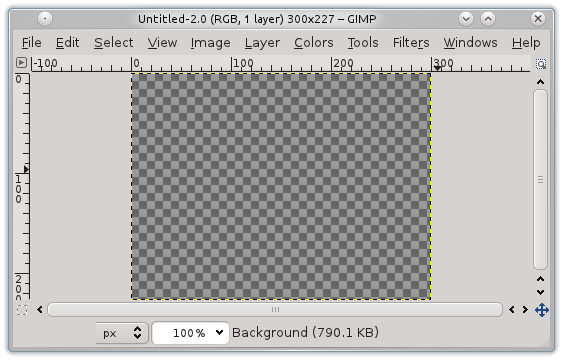 Add your macro text in white, in the Impact Condensed font. 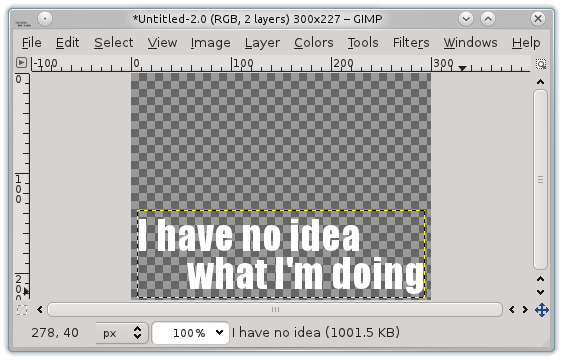 Right click the text layer and select “Alpha to Selection,” then under Select, grow the selection by a few pixels — 3 in this case. 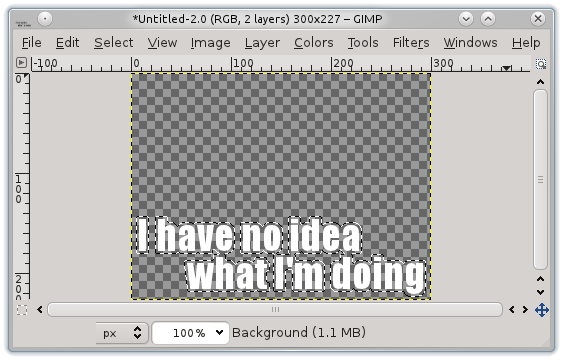 Select the background layer and fill the selection with black, giving a black border to the text. 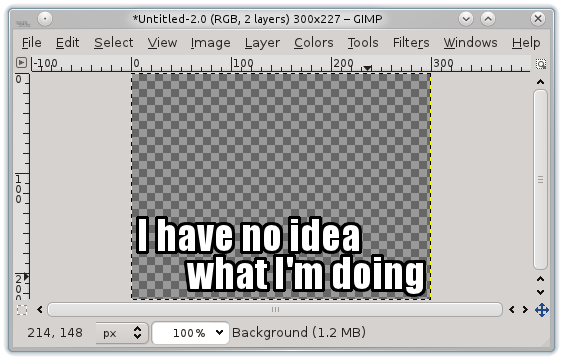 Save this image as text.png, for our text overlay. 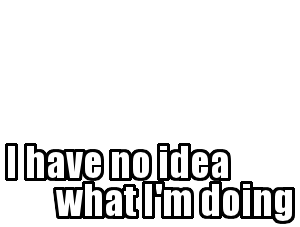 Time to go back and redo the frames, overlaying the text this time. This is called compositing and ImageMagick can do it without breaking a sweat. To composite two images is simple.

List the image to go on top, then use the -composite flag, and it’s placed over top of the base image. In my case, I actually don’t want the text to appear until Calvin, the orange cat, faces the camera. This happens quite conveniently at just about frame 500, so I’m only going to redo those frames.

Run Gifsicle again and this 6.2 MB image is the result. The text overlay compresses better, so it’s a tiny bit smaller.