One of the users of my Emacs java extensions e-mailed me with a question/suggestion about viewing .class files in Emacs. Emacs has automatic compression, encryption, and archive modes which allow certain non-text files to be viewed within Emacs in a sensible text form. He wanted to do the same with Java byte-compiled .class files: when opening a .class file, Emacs should automatically and transparently decompile the bytecode into Java source.

He mentioned [JAD](http://en.wikipedia.org/wiki/JAD_(JAva_Decompiler%29) specifically, a popular, proprietary, but unmaintained and outdated Java bytecode decompiler. I’ve never used it and honestly I see no reason to start using it. Unfortunately there are no other decompilers in the Debian package archives and I know nothing else about Java decompiling, so this left me kind of stuck. Instead I decided to build a proof-of-concept using javap, the Java disassembler, which comes with JDKs.

Here it is: javap-handler.el. With these forms evaluated, try opening a .class file in Emacs. Rather than a screen full of junk, you’ll (hopefully) be presented with a read-only buffer containing detailed information about the class. 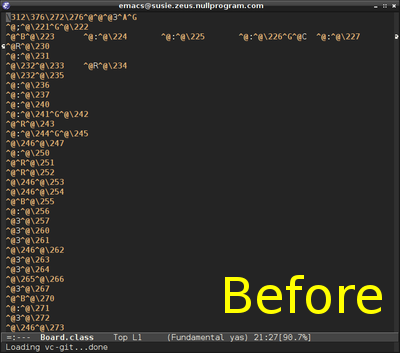 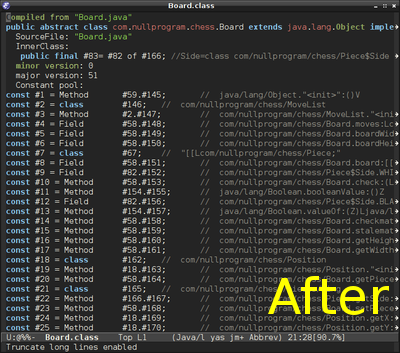 This was harder to do than I thought it would be. To make a new “magic” file mode requires the use of a half-documented, hackish file-name-handler API. There’s a page on it in the GNU Emacs Lisp Reference Manual but I mostly figured it out by reading the source code around auto-compression-mode and auto-encryption-mode.

It works by installing a handler function in file-name-handler-alist — similar to auto-mode-alist. The handler has complete control over how a particularly-named class of files is handled by Emacs. For example, the most useful part is instead of actually providing the contents of a file, the handler can present any contents it wants. In this case, rather than read in the actual bytecode, the handler executes javap on the file and uses the output for the buffer content.

The hackish part is when the handler wants to let Emacs handle an operation the normal way, which is pretty much every case except for get-file-buffer. The handler has to disable itself by temporarily setting a dynamically-scoped variable (one of the many legacy areas that prevents Emacs from being lexically-scoped by default), then ask Emacs to try the operation again.

As I said, this is just a proof-of-concept so there are two issues remaining. The first was something requested specifically: viewing .class files inside .jar archives. It could do this if it was just a little bit smarter about the classpath. I leave that as an exercise to the reader. :-)

The second is finding a well-behaved, reasonable decompiler (GUI-less Unix filter) and replacing javap with it. Given that assumption, this should be as simple as replacing a couple of strings in the call-process.

This is interesting enough that, if I were to fix it up for correctness sometime, I may include it as part of java-mode-plus someday.