Ten years ago I was a high school senior taking my second year of physics. Having recently reviewed vectors and gravity, as well as being an avid Visual Basic programmer at the time, I decided to create my own n-body simulation. I recently came across this old project and fortunately (since I can no longer compile it) I had left a compiled version with the source code. Here it is in Wine, 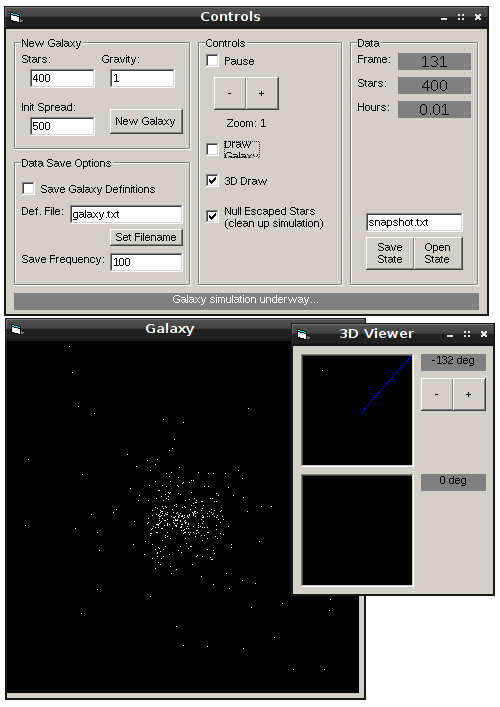 Really, it’s really not worth downloading but I’m putting a link here for my own archival purposes.

I didn’t quite understand what I was doing so I screwed up the math. All the vector computations were done independently. Integration was done by Euler method — a sin I continue to commit regularly to this day but now I’m at least aware of the limitations. Despite this, it was still accurate enough to look interesting.

Probably the most advanced thing to come out of it, and something I did do correctly, was the display. I worked out my own graphics engine to project three-dimensional star coordinates onto the two-dimensional drawing surface, re-inventing perspective projection.

As I said, I recently came across it again while digging around my digital archives. Now that I’m a professional developer I wondered how much faster I could do the same thing with just a few hours of coding. I did it in C and my implementation was about an order of magnitude faster. Not as much as I hoped, but it’s something!

It’s still Euler method integration, the bodies are still point masses, and there are no collisions so there’s numerical instability when they get close. However, I did get the vector math right! My goal was to make something that looked interesting rather than an accurate simulation, so all of this is alright.

I only wrote the simulation, not a display. To display the output I just had GNU Octave plot it for me, which I turned into videos. This first video is a static view of the origin of the coordinate system. If you watch (or skip) all the way to the end you’ll see that the galaxy drifts out of view. This is due to a bias in the random number generator — the galaxy’s mass was lopsided.

I bit more tweaking of the galaxy start state (normal distribution, adding initial velocities) and the camera and I got this interesting result. The galaxy initially bunches into two globs, which then merge.

I wouldn’t have bothered with a post about this but I think these videos turned out to be interesting.