I watched this presentation last night about introducing Clojure in the workplace, Bootstrapping Clojure. Most of the video is Tyler presenting code he wrote, so there’s a lot of Clojure code displayed in the presentation. The way he presented the code itself was interesting: indentation was highlighted in alternating shades of gray.

Such emphasis on indentation could be useful specifically for reading Lisp, because, for humans, what makes s-expressions readable isn’t the parenthesis but the indentation. That’s why us Lispers shake our heads when non-Lispers complain that there are too many parenthesis. We don’t notice them!

He’s a Vim user so I assume this is some Vim extension, but maybe it’s just the output from a particular pretty printer. I thought it would be interesting to have this feature in Emacs, so I created a minor mode for it.

Here’s what it looks like with the default Emacs theme. 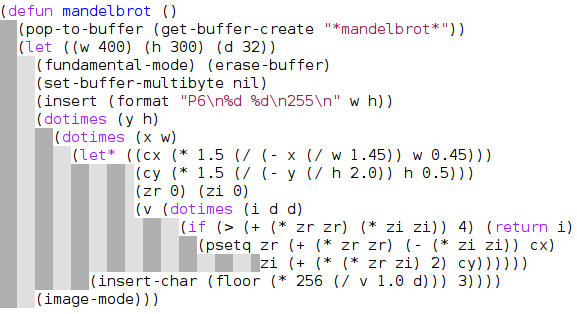 And some Java with visual-indentation-width set to 4,

Dark themes (like the Wombat theme I personally use) will work as well, with the indentation highlighting appearing darker.

It can be enabled by default in all programming modes easily,

It completely falls apart when tabs are used for indentation, which Emacs will use by default. My configuration forbids tabs (tabs are stupid, people!) but I still need to edit other people’s code containing tabs. I don’t think there’s a way to apply highlighting to part of a tab, so I’m not sure if there’s a way to fix that. Because I don’t intend to actually use the mode regularly, it’s just a proof of concept, and fixing it would be non-trivial, I don’t intend to fix it.