Unsatisfied with my the results of recent search for a new web feed reader, I created my own from scratch, called Elfeed. It’s built on top of Emacs and is available for download through MELPA. I intend it to be highly extensible, a power user’s web feed reader. It supports both Atom and RSS.

The design of Elfeed was inspired by notmuch, which is my e-mail client of choice. I’ve enjoyed the notmuch search interface and the extensibility of the whole system — a side-effect of being written in Emacs Lisp — so much that I wanted a similar interface for my web feed reader.

Unlike many other feed readers, Elfeed is oriented around entries — the Atom term for articles — rather than feeds. It cares less about where entries came from and more about listing relevant entries for reading. This listing is the *elfeed-search* buffer. It looks like this, 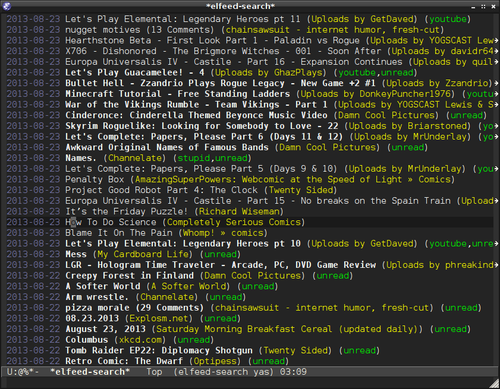 This buffer is not necessarily about listing unread or recent entries, it’s a filtered view of all entries in the local Elfeed database. Hence the “search” buffer. Entries are marked with various tags, which play a role in view filtering — the notmuch model. By default, all new entries are tagged unread (customize with elfeed-initial-tags). I’ll cover the filtering syntax shortly.

From the search buffer there are a number of ways to interact with entries. You can select an single entry with the point, or multiple entries at once with a region, and interact with them.

(This list can be viewed within Emacs with the standard C-h m.)

The last action uses the Simple HTTP Renderer (shr), now part of Emacs, to render entry content into a buffer for viewing. It will even fetch and display images in the buffer, assuming your Emacs has been built for it. (Note: the GNU-provided Windows build of Emacs doesn’t ship with the necessary libraries.) It looks a lot like reading an e-mail within Emacs, 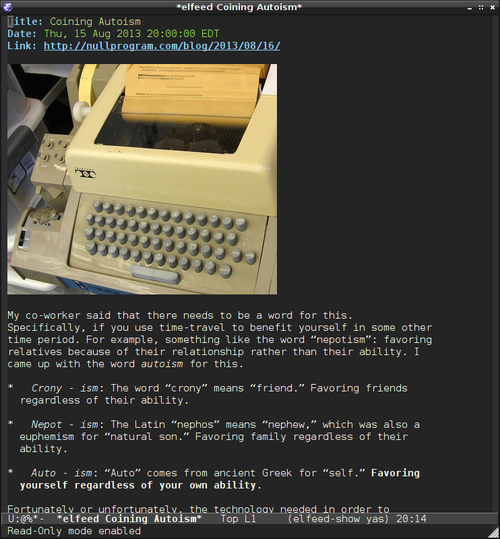 The standard read-only keys are in action. Space and backspace are for page up/down. The n and p keys switch between the next and previous entries from the search buffer. The idea is that you should be able to hop into the first entry and work your way along reading them within Emacs when possible.

Elfeed maintains a database in ~/.elfeed/ (configurable). It will start out empty because you need to tell it what feeds you’d like to follow. List your feeds elfeed-feeds variable. You would do this in your .emacs or other initialization files.

Once set, hitting G (capitalized) in the search buffer or running elfeed-update will tell Elfeed to fetch each of these feeds and load in their entries. Entries will populate the search buffer as they are discovered (assuming they pass the current filter), where they can be immediately acted upon. Pressing g (lower case) refreshes the search buffer view without fetching any feeds.

Everything fetched will be added to the database for next time you run Emacs. It’s not required at all in order to use Elfeed, but I’ll discuss some of the details of the database format in another post.

Pressing s in the search buffer will allow you to edit the search filter in action.

There are three kinds of ways to filter on entries, in order of efficiency: by age, by tag, and by regular expression. For an entry to be shown, it must pass each of the space-delimited components of the filter.

Ages are described by plain language relative time, starting with @. This component is ultimately parsed by Emacs’ time-duration function. Here are some examples.

Anything else is treated like a regular expression. However, the regular expression is applied only to titles and URLs for both entries and feeds. It’s not currently possible to filter on entry content, and I’ve found that I never want to do this anyway.

Putting it all together, here are some examples.

Note: the database is date-oriented, so age filtering is by far the fastest. Including an age limit will greatly increase the performance of the search buffer, so I recommend adding it to the default filter (elfeed-search-search-filter).

Generally you don’t want to spend time tagging entries. Fortunately this step can easily be automated using elfeed-make-tagger. To tag all YouTube entries with youtube and video,

Any functions added to elfeed-new-entry-hook are called with the new entry as its argument. The elfeed-make-tagger function returns a function that applies tags to entries matching specific criteria.

This tagger tags old entries as read. It’s handy for initializing an Elfeed database on a new computer, since I’ve likely already read most of the entries being discovered.

Tagging is also really handy for fixing some kinds of broken feeds or otherwise filtering out unwanted content. I like to use a junk tag to indicate uninteresting entries.

There are a few feeds I’d like to follow but do not because the entries lack dates. This makes them difficult to follow without a shared, persistent database. I’ve contacted the authors of these feeds to try to get them fixed but have not gotten any responses. I haven’t quite figured out how to do it yet, but I will eventually create a function for elfeed-new-entry-hook that adds reasonable dates to these feeds.

In my own .emacs.d configuration I’ve added a new entry action to Elfeed: video downloads with youtube-dl. When I hit d on a YouTube entry either in the entry “show” buffer or the search buffer, Elfeed will download that video into my local drive. I consume quite a few YouTube videos on a regular basis (I’m a “cord-never”), so this has already saved me a lot of time.

Adding custom actions like this to Elfeed is exactly the extensibility I’m interested in supporting. I want this to be easy. After just a week of usage I’ve already customized Elfeed a lot for myself — very specific customizations which are not included with Elfeed. 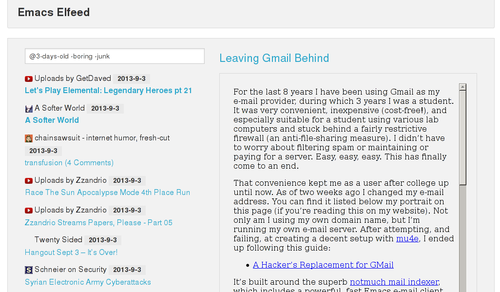 Elfeed exposes a RESTful JSON API, consumable by any application. The web interface builds on this using AngularJS, behaving as a single-page application. It includes a filter search box that filters out entries as you type. I think it’s pretty slick, though still a bit rough.

It still needs some work to truly be useful. I’m intending for this to become the “mobile” interface to Elfeed, for remote access on a phone or tablet. Patches welcome.

After Google Reader closed I tried The Old Reader for awhile. When that collapsed under its own popularity I decided to go with a local client reader. Canto was crushed under the weight of all my feeds, so I ended up using Liferea for awhile. Frustrated at Liferea’s lack of extensibility and text-file configuration, I ended up writing Elfeed.

Elfeed now serving 100% of my personal web feed reader needs. I think it’s already far better than any reader I’ve used before. Another case of “I should have done this years ago,” though I think I lacked the expertise to pull it off well until fairly recently.

At the moment I believe Elfeed is already the most extensible and powerful web feed reader in the world.