A GPU Approach to Voronoi Diagrams

I recently got an itch to play around with Voronoi diagrams. It’s a diagram that divides a space into regions composed of points closest to one of a set of seed points. There are a couple of algorithms for computing a Voronoi diagram: Bowyer-Watson and Fortune. These are complicated and difficult to implement.

However, if we’re interested only in rendering a Voronoi diagram as a bitmap, there’s a trivial brute for algorithm. For every pixel of output, determine the closest seed vertex and color that pixel appropriately. It’s slow, especially as the number of seed vertices goes up, but it works perfectly and it’s dead simple!

Does this strategy seem familiar? It sure sounds a lot like an OpenGL fragment shader! With a shader, I can push the workload off to the GPU, which is intended for this sort of work. Here’s basically what it looks like.

If you have a WebGL-enabled browser, you can see the results for yourself here. Now, as I’ll explain below, what you see here isn’t really this shader, but the result looks identical. There are two different WebGL implementations included, but only the smarter one is active. (There’s also a really slow HTML5 canvas fallback.)

You can click and drag points around the diagram with your mouse. You can add and remove points with left and right clicks. And if you press the “a” key, the seed points will go for a random walk, animating the whole diagram. Here’s a (HTML5) video showing it off.

Unfortunately, there are some serious problems with this approach. It has to do with passing seed information as uniforms.

Because of these limitations, this is not a very good way of going about computing Voronoi diagrams on a GPU. Fortunately there’s a much much better approach!

With the above implemented, I was playing around with the fragment shader, going beyond solid colors. For example, I changed the shade/color based on distance from the seed vertex. A results of this was this “blood cell” image, a difference of a couple lines in the shader. 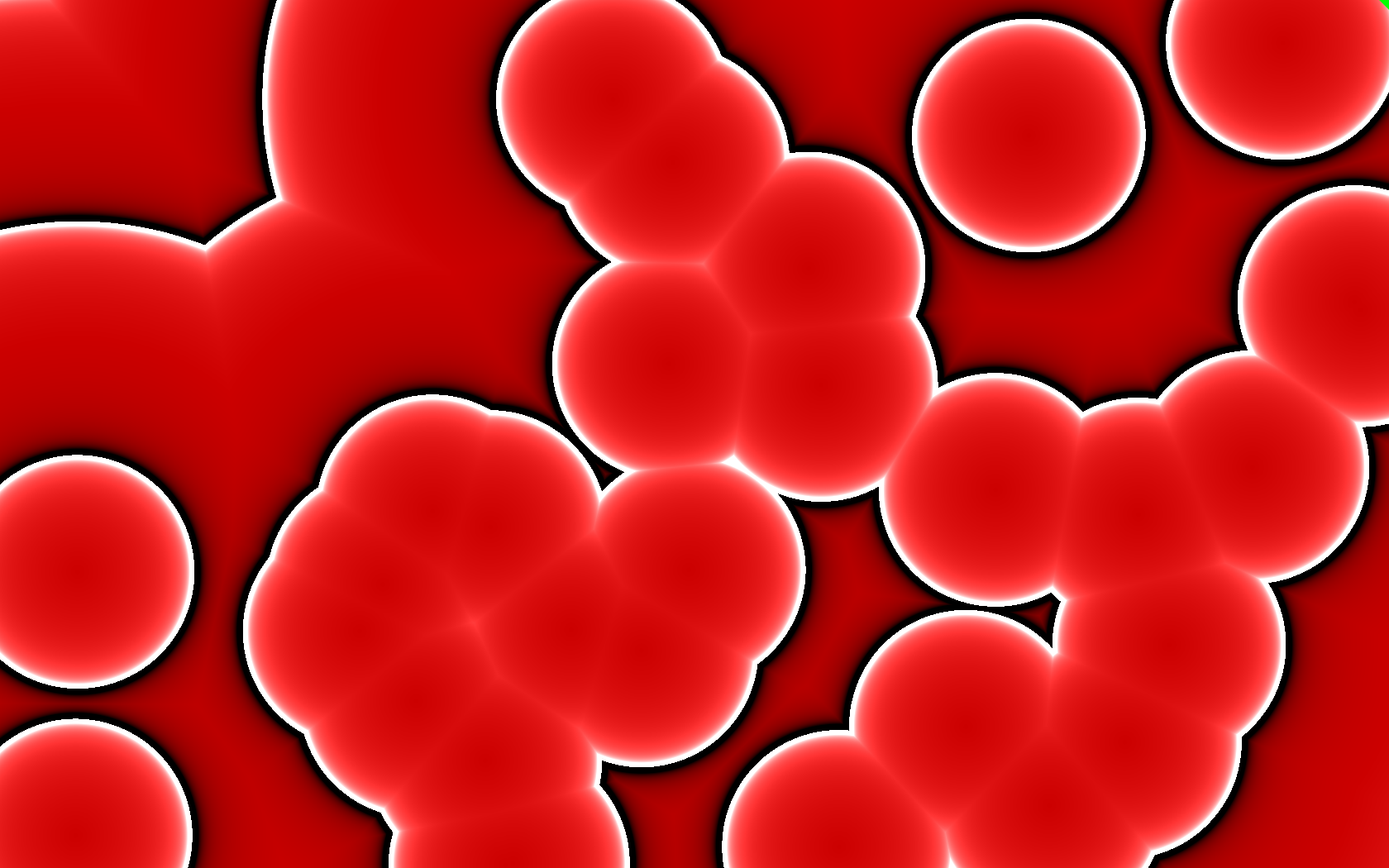 That’s when it hit me! Render each seed as cone pointed towards the camera in an orthographic projection, coloring each cone according to the seed’s color. The Voronoi diagram would work itself out automatically in the depth buffer. That is, rather than do all this distance comparison in the shader, let OpenGL do its normal job of figuring out the scene geometry.

Here’s a video (GIF) I made that demonstrates what I mean.

Not only is this much faster, it’s also far simpler! Rather than being limited to a hundred or so seed vertices, this version could literally do millions of them, limited only by the available memory for attribute buffers.

There’s a catch, though. There’s no way to perfectly represent a cone in OpenGL. (And if there was, we’d be back at the brute force approach as above anyway.) The cone must be built out of primitive triangles, sort of like pizza slices, using GL_TRIANGLE_FAN mode. Here’s a cone made of 16 triangles. 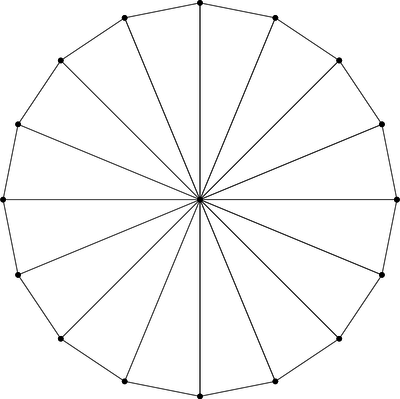 Instancing to the Rescue

At this point things are looking pretty good. On my desktop, I can maintain 60 frames-per-second for up to about 500 seed vertices moving around randomly (“a”). After this, it becomes draw-bound because each seed vertex requires a separate glDrawArrays() call to OpenGL. The workaround for this is an OpenGL extension called instancing. The WebGL extension for instancing is ANGLE_instanced_arrays.

The cone model was already sent to the GPU during initialization, so, without instancing, the draw loop only has to bind the uniforms and call draw for each seed. This code uses my Igloo WebGL library to simplify the API.

It’s driving this pair of shaders.

Instancing works by adjusting how attributes are stepped. Normally the vertex shader runs once per element, but instead we can ask that some attributes step once per instance, or even once per multiple instances. Uniforms are then converted to vertex attribs and the “loop” runs implicitly on the GPU. The instanced glDrawArrays() call takes one additional argument: the number of instances to draw.

The ugly ANGLE names are because this is an extension, not part of WebGL itself. As such, my program will fall back to use multiple draw calls when the extension is not available. It’s only there for a speed boost.

Here are the new shaders. Notice the uniforms are gone.

On the same machine, the instancing version can do a few thousand seed vertices (an order of magnitude more) at 60 frames-per-second, after which it becomes bandwidth saturated. This is because, for the animation, every vertex position is updated on the GPU on each frame. At this point it’s overcrowded anyway, so there’s no need to support more.