An Array of Pointers vs. a Multidimensional Array

In a C program, suppose I have a table of color names of similar length. There are two straightforward ways to construct this table. The most common would be an array of char *.

The other is a two-dimensional char array.

The initializers are identical, and the syntax by which these tables are used is the same, but the underlying data structures are very different. For example, suppose I had a lookup() function that searches the table for a particular color.

Thanks to array decay — array arguments are implicitly converted to pointers (§6.9.1-10) — it doesn’t matter if the table is char colors[][7] or char *colors[]. It’s a little bit misleading because the compiler generates different code depending on the type.

Here’s what colors_ptr, a jagged array, typically looks like in memory. 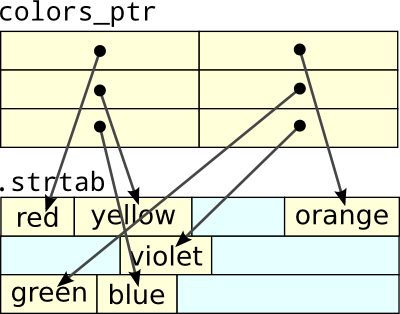 The array of six pointers will point into the program’s string table, usually stored in a separate page. The strings aren’t in any particular order and will be interspersed with the program’s other string constants. The type of the expression colors_ptr[n] is char *.

On x86-64, suppose the base of the table is in rax, the index of the string I want to retrieve is rcx, and I want to put the string’s address back into rax. It’s one load instruction.

Contrast this with colors_2d: six 7-byte elements in a row. No pointers or addresses. Only strings.

The strings are in their defined order, packed together. The type of the expression colors_2d[n] is char [7], an array rather than a pointer. If this was a large table used by a hot function, it would have friendlier cache characteristics — both in locality and predictability.

In the same scenario before with x86-64, it takes two instructions to put the string’s address in rax, but neither is a load.

In this particular case, the generated code can be slightly improved by increasing the string size to 8 (e.g. char colors_2d[][8]). The multiply turns into a simple shift and the ALU no longer needs to be involved, cutting it to one instruction. This looks like a load due to the LEA (Load Effective Address), but it’s not.

There’s another factor to consider: relocation. Nearly every process running on a modern system takes advantage of a security feature called Address Space Layout Randomization (ASLR). The virtual address of code and data is randomized at process load time. For shared libraries, it’s not just a security feature, it’s essential to their basic operation. Libraries cannot possibly coordinate their preferred load addresses with every other library on the system, and so must be relocatable.

If the program is compiled with GCC or Clang configured for position independent code — -fPIC (for libraries) or -fpie + -pie (for programs) — extra work has to be done to support colors_ptr. Those are all addresses in the pointer array, but the compiler doesn’t know what those addresses will be. The compiler fills the elements with temporary values and adds six relocation entries to the binary, one for each element. The loader will fill out the array at load time.

However, colors_2d doesn’t have any addresses other than the address of the table itself. The loader doesn’t need to be involved with each of its elements. Score another point for the two-dimensional array.

On x86-64, in both cases the table itself typically doesn’t need a relocation entry because it will be RIP-relative (in the small code model). That is, code that uses the table will be at a fixed offset from the table no matter where the program is loaded. It won’t need to be looked up using the Global Offset Table (GOT).

In case you’re ever reading compiler output, in Intel syntax the assembly for putting the table’s RIP-relative address in rax looks like so:

Or in AT&T syntax:

Besides (trivially) more work for the loader, there’s another consequence to relocations: Pages containing relocations are not shared between processes (except after fork()). When loading a program, the loader doesn’t copy programs and libraries to memory so much as it memory maps their binaries with copy-on-write semantics. If another process is running with the same binaries loaded (e.g. libc.so), they’ll share the same physical memory so long as those pages haven’t been modified by either process. Modifying the page creates a unique copy for that process.

Relocations modify parts of the loaded binary, so these pages aren’t shared. This means colors_2d has the possibility of being shared between processes, but colors_ptr (and its entire page) definitely does not. Shucks.

This is one of the reasons why the Procedure Linkage Table (PLT) exists. The PLT is an array of function stubs for shared library functions, such as those in the C standard library. Sure, the loader could go through the program and fill out the address of every library function call, but this would modify lots and lots of code pages, creating a unique copy of large parts of the program. Instead, the dynamic linker lazily supplies jump addresses for PLT function stubs, one per accessed library function.

However, as I’ve written it above, it’s unlikely that even colors_2d will be shared. It’s still missing an important ingredient: const.

They say const isn’t for optimization but, darnit, this situation keeps coming up. Since colors_ptr and colors_2d are both global, writable arrays, the compiler puts them in the same writable data section of the program, and, in my test program, they end up right next to each other in the same page. The other relocations doom colors_2d to being a local copy.

Fortunately it’s trivial to fix by adding a const:

Writing to this memory is now undefined behavior, so the compiler is free to put it in read-only memory (.rodata) and separate from the dirty relocations. On my system, this is close enough to the code to wind up in executable memory.

Note, the equivalent for colors_ptr requires two const qualifiers, one for the array and another for the strings. (Obviously the const doesn’t apply to the loader.)

String literals are already effectively const, though the C specification (unlike C++) doesn’t actually define them to be this way. But, like setting your relationship status on Facebook, declaring it makes it official.

These little details are all deep down the path of micro-optimization and will rarely ever matter in practice, but perhaps you learned something broader from all this. This stuff fascinates me.