A Magnetized Needle and a Steady Hand

Now they’ve gone an done it. An unidentified agency has spread a potent computer virus across all the world’s computers and deleted the binaries for every copy of every software development tool. Even the offline copies — it’s that potent.

Most of the source code still exists, even for the compilers, and most computer systems will continue operating without disruption, but no new software can be developed unless it’s written byte by byte in raw machine code. Only real programmers can get anything done.

The world’s top software developers have been put to work bootstrapping a C compiler (and others) completely from scratch so that we can get back to normal. Without even an assembler, it’s a slow, tedious process.

In the mean time, rather than wait around for the bootstrap work to complete, the rest of us have been assigned individual programs hit by the virus. For example, many basic unix utilities have been wiped out, and the bootstrap would benefit from having them. Having different groups tackle each missing program will allow the bootstrap effort to move forward somewhat in parallel. At least that’s what the compiler nerds told us. The real reason is that they’re tired of being asked if they’re done yet, and these tasks will keep the rest of us quietly busy.

Fortunately you and I have been assigned the easiest task of all: We’re to write the true command from scratch. We’ll have to figure it out byte by byte. The target is x86-64 Linux, which means we’ll need the following documentation:

The program we’re writing is true, whose behavior is documented as “do nothing, successfully.” All command line arguments are ignored and no input is read. The program only needs to perform the exit system call, immediately terminating the process.

According to the ABI document (3) Appendix A, the registers for system call arguments are: rdi, rsi, rdx, r10, r8, r9. The system call number goes in rax. The exit system call takes only one argument, and that argument will be 0 (success), so rdi should be set to zero. It’s likely that it’s already zero when the program starts, but the ABI document says its contents are undefined (§3.4), so we’ll set it explicitly.

There’s no assembler available to turn this into machine code, so it has to be assembled by hand. For that we need the Intel manual (2).

The first instruction is xor, so look up that mnemonic in the manual. Like most x86 mnemonics, there are many different opcodes and multiple ways to encode the same operation. For xor, we have 22 opcodes to examine. 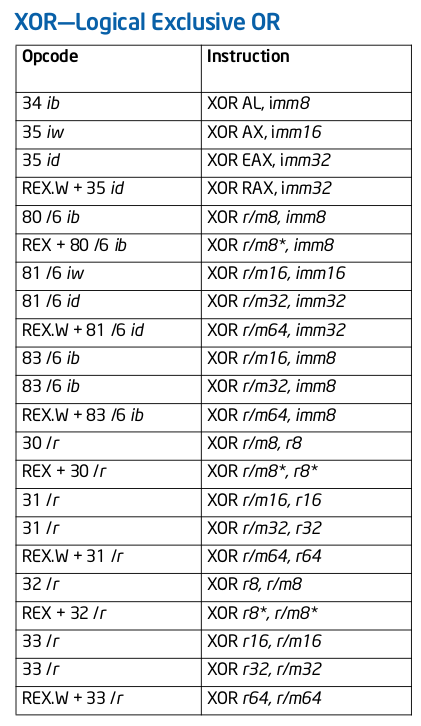 The operands are two 32-bit registers, so there are two options: opcodes 0x31 and 0x33.

The “r/m32” means the operand can be either a register or the address of a 32-bit region of memory. With two register operands, both encodings are equally valid, both have the same length (2 bytes), and neither is canonical, so the decision is entirely arbitrary. Let’s pick the first one, opcode 0x31, since it’s listed first.

The “/r” after the opcode means the register-only operand (“r32” in both cases) will be specified in the ModR/M byte. This is the byte that immediately follows the opcode and specifies one of two of the operands.

The ModR/M byte is broken into three parts: mod (2 bits), reg (3 bits), r/m (3 bits). This gets a little complicated, but if you stare at Table 2-1 in the Intel manual for long enough it eventually makes sense. In short, two high bits (11) for mod indicates we’re working with a register rather than a load. Here’s where we’re at for ModR/M:

Or, in hexadecimal, FF. And that’s it for this instruction. With the opcode (0x31) and the ModR/M byte (0xFF):

The encoding for mov is a bit different. Look it up and match the operands. Like before, there are two possible options:

In the B8+rd notation means the 32-bit register operand (rd for “register double word”) is added to the opcode instead of having a ModR/M byte. It’s followed by a 32-bit immediate value (id for “integer double word”). That’s a total of 5 bytes.

The “/0” in second means 0 goes in the “reg” field of ModR/M, and the whole instruction is followed by the 32-bit immediate (id). That’s a total of 6 bytes. Since this is longer, we’ll use the first encoding.

The final instruction is a cakewalk. There are no operands, it comes in only one form of two opcode bytes.

So the encoding for this instruction is:

Putting it all together the program is 9 bytes:

Aren’t you glad you don’t normally have to assemble entire programs by hand?

Back in the old days you may have been able to simply drop these bytes into a file and execute it. That’s how DOS COM programs worked. But this definitely won’t work if you tried it on Linux. Binaries must be in the Executable and Linking Format (ELF). This format tells the loader how to initialize the program in memory and how to start it.

To fill this binary out, we’d use whatever method the virus left behind for writing raw bytes to a file. For now I’ll assume the echo command is still available, and we’ll use hexadecimal \xNN escapes to write raw bytes. If this isn’t available, you might need to use the magnetic needle and steady hand method, or the butterflies.

The very first structure in an ELF file must be the ELF header, from the ELF specification (1):

No other data is at a fixed location because this header specifies where it can be found. If you’re writing a C program in the future, once compilers have been bootstrapped back into existence, you can access this structure in elf.h.

The 6th byte indicates the integer format (EI_DATA). The one we want for x86-64 is ELFDATA2LSB (1), two’s complement, little-endian.

The 7th byte is the ELF version (EI_VERSION), always 1 as of this writing.

The 8th byte is the ABI (ELF_OSABI), which in this case is ELFOSABI_SYSV (0).

The 9th byte is the version (EI_ABIVERSION), which is just 0 again.

The rest is zero padding.

So writing the ELF header:

The e_entry field will be 8 bytes because this is a 64-bit ELF. This is the virtual address of the program’s entry point. It’s where the loader will pass control and so it’s where we’ll load the program. The typical entry address is somewhere around 0x400000. For a reason I’ll explain shortly, our entry point will be 120 bytes (0x78) after that nice round number, at 0x40000078.

The e_phoff field holds the offset of the program header table. The ELF header is 64 bytes (0x40) and this structure will immediately follow. It’s also 8 bytes.

The e_shoff header holds the offset of the section table. In an executable program we don’t need sections, so this is zero.

The e_flags field has processor-specific flags, which in our case is just 0.

The e_phnum field indicates how many program headers there are. We only need the one: the segment with the 9 program bytes, to be loaded into memory.

The e_shentsize is the size of a section header. We’re not using this, but we’ll do our due diligence. These are 64 bytes (0x40).

The e_shnum field is the number of sections (0).

The e_shstrndx is the index of the section with the string table. It doesn’t exist, so it’s 0.

Next is our program header.

The p_type field indicates the segment type. This segment will hold the program and will be loaded into memory, so we want PT_LOAD (1). Other kinds of segments set up dynamic loading and such.

The p_flags field gives the memory protections. We want executable (PF_X = 1) and readable (PF_R = 4). These are ORed together to make 5.

The p_offset is the file offset for the content of this segment. This will be the program we assembled. It will immediately follow the this header. The ELF header was 64 bytes, plus a 56 byte program header, which is 120 (0x78).

The p_vaddr is the virtual address where this segment will be loaded. This is the entry point from before. A restriction is that this value must be congruent with p_offset modulo the page size. That’s why the entry point was offset by 120 bytes.

The p_paddr is unused for this platform.

The p_filesz is the size of the segment in the file: 9 bytes.

The p_memsz is the size of the segment in memory, also 9 bytes. It might sound redundant, but these are allowed to differ, in which case it’s either truncated or padded with zeroes.

The p_align indicates the segment’s alignment. We don’t care about alignment.

Finally, append the program we assembled at the beginning.

Here’s the whole thing as a shell script:

Is the C compiler done bootstrapping yet?