The Day I Fell in Love with Fuzzing

This article was discussed on Hacker News and on reddit.

In 2007 I wrote a pair of modding tools, binitools, for a space trading and combat simulation game named Freelancer. The game stores its non-art assets in the format of “binary INI” files, or “BINI” files. The motivation for the binary format over traditional INI files was probably performance: it’s faster to load and read these files than it is to parse arbitrary text in INI format.

Much of the in-game content can be changed simply by modifying these files — changing time names, editing commodity prices, tweaking ship statistics, or even adding new ships to the game. The binary nature makes them unsuitable to in-place modification, so the natural approach is to convert them to text INI files, make the desired modifications using a text editor, then convert back to the BINI format and replace the file in the game’s installation.

I didn’t reverse engineer the BINI format, nor was I the first person the create tools to edit them. The existing tools weren’t to my tastes, and I had my own vision for how they should work — an interface more closely following the Unix tradition despite the target being a Windows game.

When I got started, I had just learned how to use yacc (really Bison) and lex (really flex), as well as Autoconf, so I went all-in with these newly-discovered tools. It was exciting to try them out in a real-world situation, though I slavishly aped the practices of other open source projects without really understanding why things were they way they were. Due to the use of yacc/lex and the configure script build, compiling the project required a full, Unix-like environment. This is all visible in the original version of the source.

The project was moderately successful in two ways. First, I was able to use the tools to modify the game. Second, other people were using the tools, since the binaries I built show up in various collections of Freelancer modding tools online.

That’s the way things were until mid-2018 when I revisited the project. Ever look at your own old code and wonder what they heck you were thinking? My INI format was far more rigid and strict than necessary, I was doing questionable things when writing out binary data, and the build wasn’t even working correctly.

With an additional decade of experience under my belt, I knew I could do way better if I were to rewrite these tools today. So, over the course of a few days, I did, from scratch. That’s what’s visible in the master branch today.

I like to keep things simple which meant no more Autoconf, and instead a simple, portable Makefile. No more yacc or lex, and instead a hand-coded parser. Using only conforming, portable C. The result was so simple that I can build using Visual Studio in a single, short command, so the Makefile isn’t all that necessary. With one small tweak (replace stdint.h with a typedef), I can even build and run binitools in DOS.

The new version is faster, leaner, cleaner, and simpler. It’s far more flexible about its INI input, so its easier to use. But is it more correct?

I’ve been interested in fuzzing for years, especially american fuzzy lop, or afl. However, I wasn’t having success with it. I’d fuzz some of the tools I use regularly, and it wouldn’t find anything of note, at least not before I gave up. I fuzzed my JSON library, and somehow it turned up nothing. Surely my JSON parser couldn’t be that robust already, could it? Fuzzing just wasn’t accomplishing anything for me. (As it turns out, my JSON library is quite robust, thanks in large part to various contributors!)

So I’ve got this relatively new INI parser, and while it can successfully parse and correctly re-assemble the game’s original set of BINI files, it hasn’t really been exercised that much. Surely there’s something in here for a fuzzer to find. Plus I don’t even have to write a line of code in order to run afl against it. The tools already read from standard input by default, which is perfect.

Assuming you’ve got the necessary tools installed (make, gcc, afl), here’s how easy it is to start fuzzing binitools:

The bini utility takes INI as input and produces BINI as output, so it’s far more interesting to fuzz than its inverse, unbini. Since unbini parses relatively simple binary data, there are (probably) no bugs for the fuzzer to find. I did try anyway just in case. 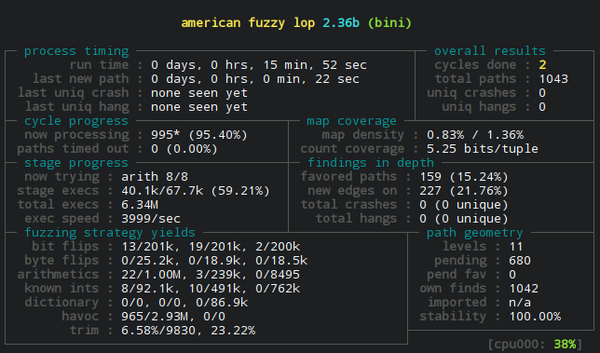 In my example above, I swapped out the default compiler for afl’s GCC wrapper (CC=afl-gcc). It calls GCC in the background, but in doing so adds its own instrumentation to the binary. When fuzzing, afl-fuzz uses that instrumentation to monitor the program’s execution path. The afl whitepaper explains the technical details.

I also created input and output directories, placing a minimal, working example into the input directory, which gives afl a starting point. As afl runs, it mutates a queue of inputs and observes the changes on the program’s execution. The output directory contains the results and, more importantly, a corpus of inputs that cause unique execution paths. In other words, the fuzzer output will be lots of inputs that exercise many different edge cases.

The most exciting and dreaded result is a crash. The first time I ran it against binitools, bini had many such crashes. Within minutes, afl was finding a number of subtle and interesting bugs in my program, which was incredibly useful. It even discovered an unlikely stale pointer bug by exercising different orderings for various memory allocations. This particular bug was the turning point that made me realize the value of fuzzing.

Not all the bugs it found led to crashes. I also combed through the outputs to see what sorts of inputs were succeeding, what was failing, and observe how my program handled various edge cases. It was rejecting some inputs I thought should be valid, accepting some I thought should be invalid, and interpreting some in ways I hadn’t intended. So even after I fixed the crashing inputs, I still made tweaks to the parser to fix each of these troublesome inputs.

Once I combed out all the fuzzer-discovered bugs, and I agreed with the parser on how all the various edge cases should be handled, I turned the fuzzer’s corpus into a test suite — though not directly.

I had run the fuzzer in parallel — a process that is explained in the afl documentation — so I had lots of redundant inputs. By redundant I mean that the inputs are different but have the same execution path. Fortunately afl has a tool to deal with this: afl-cmin, the corpus minimization tool. It eliminates all the redundant inputs.

Second, many of these inputs were longer than necessary in order to invoke their unique execution path. There’s afl-tmin, the test case minimizer, which I used to further shrink my test corpus.

I sorted the valid from invalid inputs and checked them into the repository. Have a look at all the wacky inputs invented by the fuzzer starting from my single, minimal input:

This essentially locks down the parser, and the test suite ensures a particular build behaves in a very specific way. This is most useful for ensuring that builds on other platforms and by other compilers are indeed behaving identically with respect to their outputs. My test suite even revealed a bug in diet libc, as binitools doesn’t pass the tests when linked against it. If I were to make non-trivial changes to the parser, I’d essentially need to scrap the current test suite and start over, having afl generate an entire new corpus for the new parser.

Fuzzing has certainly proven itself to be a powerful technique. It found a number of bugs that I likely wouldn’t have otherwise discovered on my own. I’ve since gotten more savvy on its use and have used it on other software — not just software I’ve written myself — and discovered more bugs. It’s got a permanent slot on my software developer toolbelt.