I recently learned of csvquote, a tool that encodes troublesome CSV characters such that unix tools can correctly process them. It reverses the encoding at the end of the pipeline, recovering the original input. The original implementation handles CSV quotes using the straightforward, naive method. However, there’s a better approach that is not only simpler, but around 3x faster on modern hardware. Even more, there’s yet another approach using SIMD intrinsics, plus some bit twiddling tricks, which increases the processing speed by an order of magnitude. My csvquote implementation includes both approaches.

Fields containing a line feed (U+000A), quotation mark (U+0022), or comma (U+002C), must be quoted, otherwise they would be ambiguous with the CSV formatting itself. Quoted quotation marks are turned into a pair of quotes. For example, here are two records with two fields apiece:

A CSV-unaware tool splitting on commas and line feeds (ex. awk) would process these records improperly. So csvquote translates quoted line feeds into record separators (U+001E) and commas into unit separators (U+001F). These control characters rarely appear in normal text data, and can be trivially processed in UTF-8-encoded text without decoding or encoding. The above records become:

The data is exactly the same length since it’s a straight byte-for-byte replacement. Quotes are left entirely untouched. The challenge is parsing the quotes to track whether the two special characters fall inside or outside pairs of quotes.

The original csvquote walks the input a byte at a time and is in one of three states: 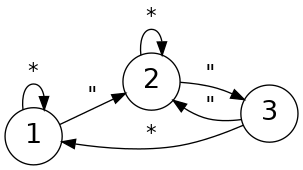 The real program also has more conditions for potentially making a replacement. It’s an awful lot of performance-killing branching.

However, this context is about finding “in” and “out” — not validating the CSV — so the “escape” state is unnecessary. I need only match up pairs of quotes. An “escaped” quote can be considered terminating a quoted region and immediately starting a new quoted region. That’s means there’s just the first two states in a trivial arrangement:

Since the text can be processed as bytes, there are only 256 possible inputs. With 2 states and 256 inputs, this state machine, with replacement machinery, can be implemented with a 512-byte table and no branches. Here’s the table initialization:

Well, strictly speaking, the decoder need not process quotes. By my benchmark (csvdump in my implementation) this processes at ~1 GiB/s on my laptop — 3x faster than the original. However, there’s still low-hanging fruit to be picked!

Any decent SIMD implementation is going to make use of masking. Find the quotes, compute a mask over quoted regions, compute another mask for replacement matches, combine the masks, then use that mask to blend the input with the replacements. Roughly:

The hard part is computing the quote mask, and also somehow handle quoted regions straddling SIMD chunks (not pictured), and do all that without resorting to slow byte-at-time operations. Fortunately there are some bitwise tricks that can resolve each issue.

Imagine I load 32 bytes into a SIMD register (e.g. AVX2), and I compute a 32-bit mask where each bit corresponds to one byte. If that byte contains a quote, the corresponding bit is set.

That last/lowest 1 corresponds to the beginning of a quoted region. For my mask, I’d like to set all bits following that bit. I can do this by subtracting 1.

Using the Kernighan technique I can also remove this bit from the original input by ANDing them together.

Now I’m left with a new bottom bit. If I repeat this, I build up layers of masks, one for each input quote.

Remember how I use XOR in the state machine above to toggle between states? If I XOR all these together, I toggle the quotes on and off, building up quoted regions:

Which gives me exactly what I want:

How can I “sign extend” a 1 into all bits set, or do nothing for zero? Negate it!

That takes care of computing quoted regions and chaining them between chunks. The loop will unfortunately cause branch prediction penalties if the input has lots of quotes, but I couldn’t find a way around this.

However, I’ve made a serious mistake. I’m using _mm256_movemask_epi8 and it puts the first byte in the lowest bit. Doh! That means it looks like this:

There’s no efficient way to flip the bits around, so I just need to find a way to work in the other direction. To flip the bits to the left of a set bit, negate it.

Unlike before, this keeps the original bit set, so I need to XOR the original value into the input to flip the quotes. This is as simple as initializing to the input rather than zero. The new loop:

The carry now depends on the high bit rather than the low bit:

The next problem: for reasons I don’t understand, AVX2 does not include the inverse of _mm256_movemask_epi8. Converting the bit-mask back into a byte-mask requires some clever shuffling. Fortunately I’m not the first to have this problem, and so I didn’t have to figure it out from scratch.

First fill the 32-byte register with repeated copies of the 32-bit mask.

Shuffle the bytes so that the first 8 register bytes have the same copy of the first bit-mask byte, etc.

In my benchmark, which includes randomly occurring quoted fields, the SIMD version processes at ~4 GiB/s — 10x faster than the original. I haven’t profiled, but I expect mispredictions on the bit-mask loop are the main obstacle preventing the hypothetical 32x speedup.

My version also optionally rejects inputs containing the two special control characters since the encoding would be irreversible. This is implemented in SIMD when available, and it slows processing by around 10%.

Geoff Langdale and others have graciously pointed out PCLMULQDQ, which can compute the quote masks using carryless multiplication (also) entirely in SIMD and without a loop. I haven’t yet quite worked out exactly how to apply it, but it should be much faster.