I was at my fiancee's parent's house over Fourth of July weekend. Her family likes to leave plenty of reading material right by the toilet, which is something fairly new to me. They take their time on the john quite seriously.

While I was in there I saw a large book of Sudoku puzzles. Since the toilet is a good spot to think (I like to call it my " thinking chair"), I thought out an algorithm for solving Sudokus. I then left the bathroom and implemented it in order to verify that it worked.

The method is trial-and-error, which it does recursively: fill in the next available spot with a valid number as defined by the rules (cannot have the same number in a column, row, or partition), and recurse. The function reports success (true) when a solution was found, or failure (false), which means we try the next available number. If no more valid numbers are available for testing at the current position, then the puzzle is not solvable (we made an error at a previous position), so we stop recursing and return failure.

Note that the recursion depth does not exceed 81, as it only recurses once per blank square. The "game tree" is broad rather than deep. It doesn't have to duplicate the puzzle matrix in memory either because all operations can be done in place.

Here is the implementation in C I typed up just after I left the bathroom,

I assumed that it would be slow solving the puzzles, having to search a wide tree, but it turns out to be very fast. It solves normal human-solvable puzzles in a couple of milliseconds. Wikipedia has a near-worst case Sudoku that is designed to make algorithms like mine perform their worst. 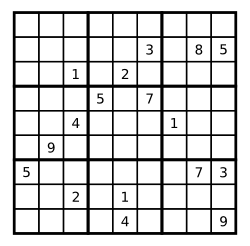 On my laptop, my program solves this in 15 seconds, which means that it should take no more than 15 seconds to solve any given Sudoku puzzle. This provides me a nice upper limit.

There is a way to "defeat" this particular puzzle. For example, say an attacker was trying to perform a denial-of-service (DoS) attack on your Sudoku solver by giving it puzzles like this one (making your server spend lots of time solving only a few puzzles). However, these puzzles assume a certain guessing order. By simply randomizing the order of guessing, both in choosing positions and the order that numbers are guessed, the attacker will have a much harder time creating a difficult puzzle. The worst case could very well be the best case. This is very similar to how Perl randomizes its hash array hash functions.

Now suppose we kept our guess order random then "solved" an empty Sudoku puzzle. What we have is a solution to a randomly generated Sudoku. To turn it into a puzzle, we just back it off a bit. A Sudoku is only supposed to have a single unambiguous solution, so we can only back off until just before the point where two solutions becomes possible. If you imagine a solution tree, this would be backing up a branch until you hit a fork.

Normally, Sudokus are symmetric (in the matrix sense), but completely randomizing the position guessing order won't achieve this. To make this work, the randomizing process can be adjusted to only select random points on the upper triangle (including the diagonal). For each point it selects not on the diagonal, the mirror point is automatically selected next. This will preserve symmetry when generating puzzles.

One issue remains: there seems to be no way to control the difficulty of the puzzles it generates. Maybe a number of open spaces left behind is a good metric? This will require some further study (and another post!).