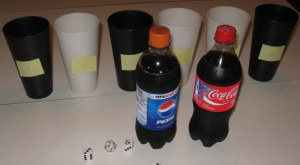 My fiancee, Kelsey, claimed that she could tell the difference between Coke and Pepsi. I wanted to put this to the test. Since there were only two of us, arranging the test wasn't a simple matter of asking someone else to pour some cups. I also wanted to do this right: testing must be double-blind. I devised a little scheme that allowed us to perform two different tests.

The first test was seeing if Kelsey or I could determine which beverage was Pepsi and which was Coke. The second was determining if there was any distinction in taste between the two drinks at all, which consisted matching two different samples together. The second test also acts as a check on the first test.

We bought one bottle of each at CVS. Next, we labeled six different cups with the numbers one though six. Each odd number is paired with the following even number. Kelsey, who was alone, used a die with an even number of sides (this includes a something as simple as a coin toss) to put one beverage in cup #1 and the other in cup #2. In this case, we used my 20-sided die I use for Dungeons and Dragons, because using it for this purpose was just full of win.

The die is important here as a random number generator. If it is left up to a human to decide what drinks go where, we may bias the setup. For example, I may be more likely to put Pepsi in an odd-numbered cup than an even-numbered one.

It is difficult for human beings to behave randomly. Try generating a list of 50 coin tosses yourself. I mean, without a coin. Just type a series of 50 H's and T's. If you examine your list of flips, you will find that you often generate very improbable series of flips (excessive heads or tails) and exhibit patterns. We need dice or coins to make decisions for us in this experiment.

To do it right, the beverage must be chosen before the roll: "I will be pouring Pepsi now.". Roll the die. If it rolls an odd number, pour the drink into the odd cup (#1). Write this information down and keep it secret.

Next, after allowing the foam to calm down (which might accidentally reveal information to me), Kelsey leaves the room and I enter. I perform a similar procedure to distribute the drinks into cups #3 and #4, then #5 and #6. I keep track of what drink, #1 or #2, goes into what cup. I keep it secret. These last two cups are for the purpose of the second experiment.

In order to make the second test double-blind, and allow me to participate, I leave the room. Kelsey rolls the die. If it rolls odd she switches the label on cups #5 and #6. It is important that these cups are identical. One flaw potential, however, is that the liquid in each cup may look unique. One may be more fizzy or one cup a little more full. Noticing this may happen subconsciously, which is the whole point of doing double-blind tests.

Ok, we didn't actually do this last part because I didn't think of it till later.

We sample all four cups (#3 - #6) in pairs, alone, making notes on what beverage we think is in what cup. Once we are both done we share our secrets and see how well we did.

Our results? Neither of us could tell the difference between Coke and Pepsi.