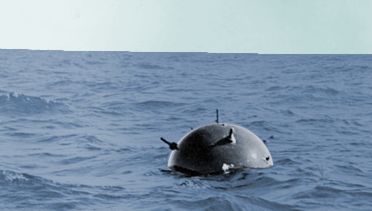 Some time ago I was watching through the entire series of Deep Space 9. It was a Star Trek television show about a space station that rests next a wormhole that connects to the other side of the galaxy (The Delta quadrant).

The Delta quadrant is ruled by a group called the Dominion, and they are looking to conquer the Federation side of the galaxy (the Alpha quadrant). At one point during the series, the Federation needs to temporarily disable the wormhole to prevent Dominion ships from crossing through. They do this by mining the wormhole with identical, cloaked, self-replicating mines.

If a mine is destroyed, the neighboring mines will replicate a replacement. The minefield repairs itself. This makes removing the minefield within a reasonable amount of time difficult to impossible. If even a single mine is left behind, it can replicate the entire minefield again.

The most interesting question here is this:

When the Federation returns and wants to remove the minefield, how would they do it? What would stop the Dominion from doing the same thing?

The first thing that comes to mind is having a kill signal, but what would this signal be? It could simply be a plain "kill" command, but the Dominion could also broadcast such a signal to disable the minefield. Consider that the Dominion could capture a single mine and study everything about its workings. The minefield itself could therefore hold no secrets whatsoever. This leaves out any possibility of a secret kill command stored in the mines.

Here's what I would do, assuming that humans or aliens have not yet discovered some giant breakthrough in factoring in the Star Trek universe. I would randomly generate two very large prime numbers. Today, two 1024-bit primes should be more than enough, but in 350 years even larger numbers would probably be necessary. Then, I multiply these two number together and store this number in the mine software. To disable the minefield, I simply broadcast these two numbers into the minefield. The mines would be programmed to take the product of any pairs of numbers it receives. If the product matches the internal number, the mine shuts down.

Voila! A method for shutting down the minefield. The enemy can know everything about every single mine's construction, including the software and data stored on every mine, but will be unable to disable the minefield without factoring a very large composite number, which would presumably be difficult or impossible (within a reasonable amount of time).

Another possibility would be using a hash. Come up with a strong passphrase, then use a hashing algorithm like SHA-1 or MD5, or whatever is available and appropriate in 350 years, to hash the passphrase. Store the hash in the mines. When you want to disable the minefield, broadcast the passphrase. These mines will hash the broadcast and compare it to the stored hash. It's really the same solution as before: a one-way function. This is also similar to how passwords are stored inside a computer today.

If we wanted more commands, like "don't blow up any ships for awhile" or "increase minefield density", we could generate more composites corresponding to each command. However, once a command is issued, the secret — the two prime numbers — is out, and it cannot be used again. In this case, I would go into the realm of public key cryptography.

I would issue a command, along with a timestamp, and maybe even a nonce that could double as a global identifier for the command, and sign the whole deal using my private key. On each mine I would store the public key. When a command is received, the mines would check the signature before executing the command. I could then issue repeat commands, as the timestamps would change each time. An adversary learns nothing when a command is issued, because the time stamps would make any replay attacks useless.

Minefields just like this exist today all over the Internet, as botnets. Thousands of computers all around the world become infected with malware and come under the control of a single individual or group. Individual machines in the botnet could be taken out, but removing the entire botnet is difficult as it grows and repairs itself. Any security researcher could disassemble the botnet malware and learn anything about it, so the malware can store no secrets. How does a malicious person control the botnet, then, without someone else taking control? Public key cryptography, just as described above.