October's Chess Engine Gets Some Attention

Looking at my server logs the other I noticed that the unnamed Chess engine I wrote this past October recently got some attention on the Immortal Chess forum. As far as I know this is the first time anyone who’s good at Chess has played it. They were analyzing its behavior a bit too.

As I expected, in its default setting (the only setting without editing text configuration files) it’s a pretty weak engine. I did this to keep is fast, so its turns would take only seconds even on older hardware. In this state it searches four plies (good engines get as high as 12). They were able to defeat it easily. 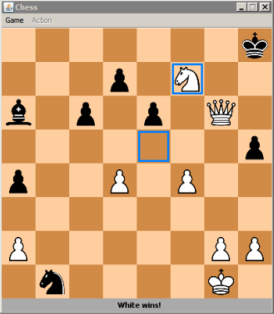 I posted some information on how they can tweak the engine without having to edit source code or download any new files. Specifically, it’s easy to increase the search depth to six plies, or more. This information may be useful in general for anyone wanting to tweak my Chess engine.

You can increase the AI’s strength with some trickery, without having to go to the source code. Open the .jar file with your favorite archive manager (looks like 7-Zip is popular around here), and locate the file com/nullprogram/chess/ai/default.properties. Open it up in a text editor and you can see some configuration for the AI (and remember to save your changes back into the .jar file).

The most important setting is “depth”, which is a default of 4 plies right now. You can set this to any even number. If you’re on modern hardware, 6 plies is still reasonably fast. 8 if you’re patient. It’s multithreaded, so more cores means faster AI. Each increase in ply is probably a strength increase of about 200-250, so 4 to 6 is about a 450 point increase.

You can also adjust piece values and situational weights (“safety” is king safety), which could possibly yield a more powerful AI. Changing these will not cause any more CPU use, but the payoff will probably be little.

The next step to making it stronger would be running a Java profiler, finding the bottlenecks, and getting the engine sped up enough to search more plies in the same amount of time. This would certainly involve tightening up memory use, because the tree search currently creates lots and lots of garbage. Another option is using opening books, but that’s not something I’m interested in doing — I like that it currently doesn’t really rely on any domain knowledge.

Even though it’s a below-average engine, it looks like it still made it into some personal Chess engine collections. Perhaps I should have put some credits in there so that, in the future, they could have found their way back here. I should have also stuck the source code in the .jar so they’d have it around too.