You may have been confused by yesterday’s nonsense post. That’s because it was generated by a few Elisp Markov chain functions. It was fed my entire blog and used to generate a ~1500 word post. I tidied up a bit to make sure the markup was valid and parenthesis were balanced, but that’s about it.

The algorithm is really simple and I was quite surprised by the quality of the output. After feeding it Great Expectations and A Princess of Mars (easily obtainable from Project Gutenberg) I had a good laugh at some of the output. Some choice quotes,

He wiped himself again, as if he didn’t marry her by hand.

I admit having done so, and the summer afternoon toned down into the house.

Suppose you want to read a great story, I recommend it.

The output also looks like some types of spam, so this may be how some spammers generate content in order to get around spam filters.

To build a Markov chain from input, the program looks at markov-text-state-size words (default 3) and makes note of what word follows. Then it slides the window forward one word and repeats. To generate text, the last markov-text-state-size words outputted is the state and the next word is selected from these notes at random, weighted by the frequency of its appearance in the input text. Smaller state sizes generates more random output and larger state sizes generates better structured output. Too large and the output is the input verbatim.

For example, given this sentence and a state size of two words,

Quickly, he ran and he ran until he couldn’t.

The produced chain looks like this in alist form, 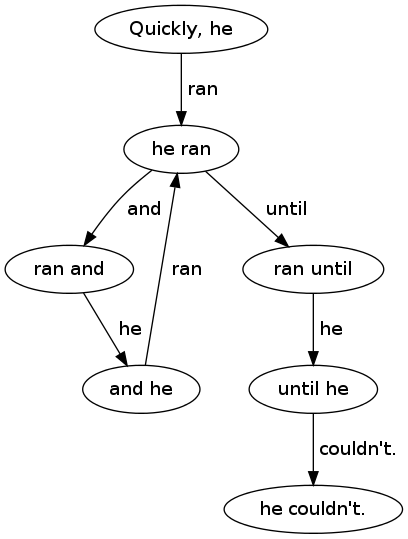 Because there are two options for (“he” “ran”), the generator might loop around that state for awhile like so,

Quickly, he ran until he couldn’t.

Also notice that the punctuation is part of the word. This makes the output more natural, automatically forming sentences. More so, my program also holds onto all newlines. This breaks the output into nice paragraphs without any extra effort. Since I wrote it in Elisp, I use fill-paragraph to properly wrap the paragraphs as I generate them, so superfluous single newlines don’t hurt anything.

One problem I did run into with my input text was quotes. I was using novels so there is a lot of quoted text (character dialog). The generated text tends to balance quotes poorly. My solution for the moment is to strip these out along with spaces when forming words. That’s still not ideal.

I’m going to play with this a bit more, using it as a tool for other project ideas (ERC bot, etc.). I already did this by including a lorem ipsum generator alongside the markov-text package. The input text is Cicero’s De finibus bonorum et malorum, the original source of lorem ipsum. This was actually the original inspiration for this project, after I saw lorem-ipsum.el on EmacsWiki and decided I could do better.