Nine years ago I bought my first laptop computer. For the first time I could carry my computer around and do productive things at places beyond my desk. In the meantime a new paradigm of mobile computing has arrived. Following a similar pattern, this month I bought a Samsung Galaxy Note 10.1, an Android tablet computer. Having never owned a smartphone, this is my first taste of modern mobile computing. 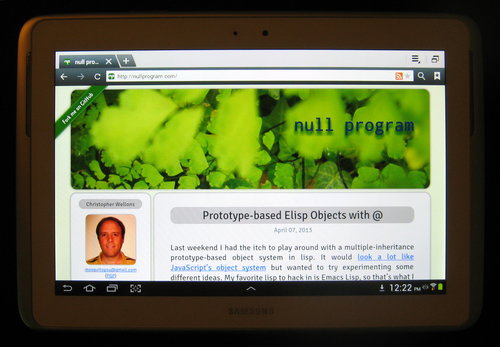 Once the technology caught up, laptops were capable enough to fully replace desktops. However, this tablet is no replacement for my laptop. Mobile devices are purely for consumption, so I will continue to use desktops and laptops for the majority of my computing. I’m writing this post on my laptop, not my tablet, for example.

Owning a tablet has opened up a whole new platform for me to explore as a programmer. I’m not particularly interested in writing Android apps, though. I’m obviously not alone in this, as I’ve found that nearly all Android software available right now is somewhere between poor and mediocre in quality. The hardware was worth the cost of the device, but the software still has a long way to go. I’m optimistic about this so I have no regrets.

Instead, I’m interested in mobile devices as a web platform. One of the few high-quality pieces of software on Android are the web browsers (Chrome and Firefox), and I’m already familiar with developing for these. Even more, I can develop software live on the tablet remotely from my laptop using Skewer — i.e. the exact same development tools and workflow I’m already using.

What’s new and challenging is the user interface. Instead of traditional clicking and typing, mobile users tap, hold, swipe, and even tilt the screen. Most challenging of all is probably accommodating both kinds of interfaces at once.

One of the first things I wanted to play with after buying the tablet was the gyro. The tablet knows its acceleration and orientation at all times. This information can be accessed in JavaScript using a fairly new API. The two events of interest are ondevicemotion and ondeviceorientation. Using simple-httpd I can transmit all this information to Emacs as it arrives.

Instead of writing a new servlet for this, to try it out I used skewer.log(). Connect a web page viewed on the tablet to Skewer hosted on the laptop, then evaluate this in a js2-mode buffer on the laptop.

These orientation values appeared in my *skewer-repl* buffer as I casually rolled the tablet on one axis. The units are obviously degrees.

It would be neat to pump these into a 3D plot display as they come in, such that my laptop displays the current tablet orientation on the screen as I move it around, but I didn’t see any quick way to do this.

Here are some acceleration values at rest. Since I took these samples on Earth the units are obviously in meters per second per second.

Now that I have the hardware for it, I really want to use this API to do something interesting in a web application. I just don’t have any specific ideas yet.