I’ve been falling into a particular design pattern when using the HTML5 Canvas element. By “design pattern” I don’t mean some pretty arrangement but rather a software design pattern. This one’s a very Lisp-like pattern, and I wonder if I would have come up with it if I hadn’t first seen it in Lisp. It can also be applied to the Java 2D API, though less elegantly.

A canvas is just another element in the page.

To draw onto it, get a context and call drawing methods on it.

This will result in a canvas that looks like this, 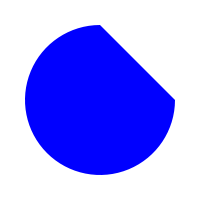 Here’s how to do the same thing with Java 2D. Very similar, except the canvas is called a JComponent and the context is called a Graphics2D. As you could imagine from this example, Java 2D API is much richer, and more object-oriented than the Canvas API. The cast from Graphics to Graphics2D is required due to legacy.

An important feature of both is the ability to globally apply transforms — translate, scale, shear, and rotate — to all drawing commands. For example, drawings on the canvas can be vertically scaled using the scale() method. Graphics2D also has a scale() method. 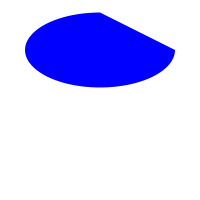 Both cases also allow the current transform to be captured and restored. Not only does this make it easier for a function to clean up after itself and properly share the canvas with other functions, but also multiple different coordinate transforms can be stacked on top of each other. For example, the bottom transform might convert between internal coordinates and screen coordinates. When it comes time to draw a minimap, another transform can be pushed on top and the same exact drawing methods applied to the canvas.

This is where Canvas and Java 2D start to differ. Both got some aspect right and some aspect wrong, and I wish I could easily have the best of both.

In canvas, this is literally a stack, and there are a pair of methods, save() and restore() for pushing and popping the transform matrix on an internal stack. The above JavaScript example may be in a function that is called more than once, so it should restore the transform matrix before returning.

In Java this stack is managed manually, and it (typically) sits inside the call stack itself as a variable.

I think Canvas’s built-in stack is more elegant than managing an extraneous variable and object. However, what’s significant about Java 2D is that we actually have access to the transform matrix. It’s that AffineTransform object. The Canvas transform matrix is an internal, inaccessible data structure. It has an established external representation, SVGMatrix, but it won’t provide a copy. If one of these is needed, a separate matrix must to be maintained in parallel. What a pain!

Why would we need the transform matrix? So that we can transform coordinates in reverse! When a user interacts with the display, the program receives screen coordinates. To be useful, these need to be converted into internal coordinates so that the program can determine where in the world the user clicked. The Java AffineTransform class has a createInverse() method for computing this inverse transform. This is something I really miss having when using Canvas. It’s such an odd omission.

So, back to the design pattern. When it comes time draw something, a transform is established on the context, something is drawn to the context, then finally the transform is removed. The word “finally” should stand out here. If we’re being careful, we should put the teardown step inside a finally block. If something goes wrong, the context will be left in a clean state. This has personally helped me in debugging.

In Lisp, this pattern is typically captured as a with- macro.

Instead of finally, the special form unwind-protect is used to clean up regardless of any error condition. Here’s a simplified version of Emacs’ with-temp-buffer macro, which itself is built on another with- macro, with-current-buffer.

The setup is to create a new buffer and switch to it. The teardown destroys the buffer, regardless of what happens in the body. An example from Common Lisp would be with-open-file.

This macro ensures that the stream is closed when the body exits, no matter what. (Side note: this can be very surprising when combined with Clojure’s laziness!)

There are no macros in JavaScript, let alone Lisp’s powerful macro system, but the pattern can still be captured using closures. Replace the body with a callback.

The callback is called once the context is in the proper state. Here’s how it would be used.

Since JavaScript has proper closures, that step variable is completely available to the callback. This function-as-body pattern comes up a lot (e.g. AMD), and seeing it work so well makes me think of JavaScript as a “suitable Lisp.”

Java’s anonymous classes are closures, but, unlike Lisp and JavaScript, they close over values rather than bindings. Purely in attempt to hide this complexity, Java requires that variables accessed from the anonymous class be declared as final. It’s awkward and confusing enough that I probably wouldn’t try to apply it in Java.

I think this pattern works very well with JavaScript, and if you dig around in some of my graphical JavaScript you’ll see that I’ve already put it to use. JavaScript functions work pretty well as a stand in for some kinds of Lisp macros.