This article has a followup.

Linux has an elegant and beautiful design when it comes to threads: threads are nothing more than processes that share a virtual address space and file descriptor table. Threads spawned by a process are additional child processes of the main “thread’s” parent process. They’re manipulated through the same process management system calls, eliminating the need for a separate set of thread-related system calls. It’s elegant in the same way file descriptors are elegant.

Normally on Unix-like systems, processes are created with fork(). The new process gets its own address space and file descriptor table that starts as a copy of the original. (Linux uses copy-on-write to do this part efficiently.) However, this is too high level for creating threads, so Linux has a separate clone() system call. It works just like fork() except that it accepts a number of flags to adjust its behavior, primarily to share parts of the parent’s execution context with the child.

It’s so simple that it takes less than 15 instructions to spawn a thread with its own stack, no libraries needed, and no need to call Pthreads! In this article I’ll demonstrate how to do this on x86-64. All of the code with be written in NASM syntax since, IMHO, it’s by far the best (see: nasm-mode).

I’ve put the complete demo here if you want to see it all at once:

I want you to be able to follow along even if you aren’t familiar with x86_64 assembly, so here’s a short primer of the relevant pieces. If you already know x86-64 assembly, feel free to skip to the next section.

x86-64 has 16 64-bit general purpose registers, primarily used to manipulate integers, including memory addresses. There are many more registers than this with more specific purposes, but we won’t need them for threading.

There’s also a “rip” instruction pointer register that conceptually walks along the machine instructions as they’re being executed, but, unlike the other registers, it can only be manipulated indirectly. Remember that data and code live in the same address space, so rip is not much different than any other data pointer.

The rsp register points to the “top” of the call stack. The stack keeps track of who called the current function, in addition to local variables and other function state (a stack frame). I put “top” in quotes because the stack actually grows downward on x86 towards lower addresses, so the stack pointer points to the lowest address on the stack. This piece of information is critical when talking about threads, since we’ll be allocating our own stacks.

So, for example, to perform a function call like foo(1, 2, 3), store 1, 2 and 3 in rdi, rsi, and rdx, then call the function. The mov instruction stores the source (second) operand in its destination (first) operand. The call instruction pushes the current value of rip onto the stack, then sets rip (jumps) to the address of the target function. When the callee is ready to return, it uses the ret instruction to pop the original rip value off the stack and back into rip, returning control to the caller.

Called functions must preserve the contents of these registers (the same value must be stored when the function returns):

When making a system call, the argument registers are slightly different. Notice rcx has been changed to r10.

Each system call has an integer identifying it. This number is different on each platform, but, in Linux’s case, it will never change. Instead of call, rax is set to the number of the desired system call and the syscall instruction makes the request to the OS kernel. Prior to x86-64, this was done with an old-fashioned interrupt. Because interrupts are slow, a special, statically-positioned “vsyscall” page (now deprecated as a security hazard), later vDSO, is provided to allow certain system calls to be made as function calls. We’ll only need the syscall instruction in this article.

So, for example, the write() system call has this C prototype.

On x86-64, the write() system call is at the top of the system call table as call 1 (read() is 0). Standard output is file descriptor 1 by default (standard input is 0). The following bit of code will write 10 bytes of data from the memory address buffer (a symbol defined elsewhere in the assembly program) to standard output. The number of bytes written, or -1 for error, will be returned in rax.

There’s one last thing you need to know: registers often hold a memory address (i.e. a pointer), and you need a way to read the data behind that address. In NASM syntax, wrap the register in brackets (e.g. [rax]), which, if you’re familiar with C, would be the same as dereferencing the pointer.

These bracket expressions, called an effective address, may be limited mathematical expressions to offset that base address entirely within a single instruction. This expression can include another register (index), a power-of-two scalar (bit shift), and an immediate signed offset. For example, [rax + rdx*8 + 12]. If rax is a pointer to a struct, and rdx is an array index to an element in array on that struct, only a single instruction is needed to read that element. NASM is smart enough to allow the assembly programmer to break this mold a little bit with more complex expressions, so long as it can reduce it to the [base + index*2^exp + offset] form.

The details of addressing aren’t important this for this article, so don’t worry too much about it if that didn’t make sense.

The trivial way to do this would be to reserve some fixed .bss (zero-initialized) storage for threads in the executable itself, but I want to do it the Right Way and allocate the stack dynamically, just as Pthreads, or any other threading library, would. Otherwise the application would be limited to a compile-time fixed number of threads.

You can’t just read from and write to arbitrary addresses in virtual memory, you first have to ask the kernel to allocate pages. There are two system calls this on Linux to do this:

On x86-64, mmap() is system call 9. I’ll define a function to allocate a stack with this C prototype.

The mmap() system call takes 6 arguments, but when creating an anonymous memory map the last two arguments are ignored. For our purposes, it looks like this C prototype.

For flags, we’ll choose a private, anonymous mapping that, being a stack, grows downward. Even with that last flag, the system call will still return the bottom address of the mapping, which will be important to remember later. It’s just a simple matter of setting the arguments in the registers and making the system call.

Now we can allocate new stacks (or stack-sized buffers) as needed.

Spawning a thread is so simple that it doesn’t even require a branch instruction! It’s a call to clone() with two arguments: clone flags and a pointer to the new thread’s stack. It’s important to note that, as in many cases, the glibc wrapper function has the arguments in a different order than the system call. With the set of flags we’re using, it takes two arguments.

Our thread spawning function will have this C prototype. It takes a function as its argument and starts the thread running that function.

The function pointer argument is passed via rdi, per the ABI. Store this for safekeeping on the stack (push) in preparation for calling stack_create(). When it returns, the address of the low end of stack will be in rax.

The second argument to clone() is a pointer to the high address of the stack (specifically, just above the stack). So we need to add STACK_SIZE to rax to get the high end. This is done with the lea instruction: load effective address. Despite the brackets, it doesn’t actually read memory at that address, but instead stores the address in the destination register (rsi). I’ve moved it back by 8 bytes because I’m going to place the thread function pointer at the “top” of the new stack in the next instruction. You’ll see why in a moment. 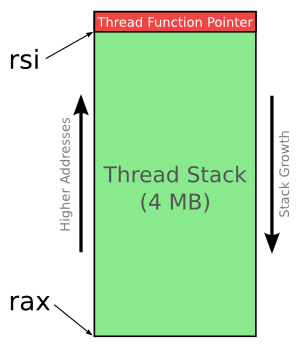 Remember that the function pointer was pushed onto the stack for safekeeping. This is popped off the current stack and written to that reserved space on the new stack.

As you can see, it takes a lot of flags to create a thread with clone(). Most things aren’t shared with the callee by default, so lots of options need to be enabled. See the clone(2) man page for full details on these flags.

A new thread will be created and the syscall will return in each of the two threads at the same instruction, exactly like fork(). All registers will be identical between the threads, except for rax, which will be 0 in the new thread, and rsp which has the same value as rsi in the new thread (the pointer to the new stack).

The value returned by thread_create() is the process ID of the new thread, which is essentially the thread object (e.g. Pthread’s pthread_t).

The thread function has to be careful not to return (ret) since there’s nowhere to return. It will fall off the stack and terminate the program with a segmentation fault. Remember that threads are just processes? It must use the exit() syscall to terminate. This won’t terminate the other threads.

Before exiting, it should free its stack with the munmap() system call, so that no resources are leaked by the terminated thread. The equivalent of pthread_join() by the main parent would be to use the wait4() system call on the thread process.

If you found this interesting, be sure to check out the full demo link at the top of this article. Now with the ability to spawn threads, it’s a great opportunity to explore and experiment with x86’s synchronization primitives, such as the lock instruction prefix, xadd, and compare-and-exchange (cmpxchg). I’ll discuss these in a future article.