When I was first attempting to learn OpenGL years ago, what I really wanted was a complete, minimal example program. OpenGL has enormous flexibility and I wanted to fully understand the fundamentals in isolation before moving on to more advanced features. I had been advised to specifically learn core profile, which drops nearly all the legacy parts of the API.

However, since much of the OpenGL-related content to be found online, even today, is outdated — and, worse, it’s not marked as such — good, modern core profile examples have been hard to come by. The relevant examples I could find at the time were more complicated than necessary, due to the common problem that full 3D graphics are too closely conflated with OpenGL. The examples would include matrix libraries, texture loading, etc. This is a big reason I ended up settling on WebGL: a clean slate in a completely different community. (The good news is that this situation has already improved dramatically over the last few years!)

Until recently, all of my OpenGL experience had been WebGL. Wanting to break out of that, earlier this year I set up a minimal OpenGL 3.3 core profile demo in C, using GLFW and gl3w. You can find it here: 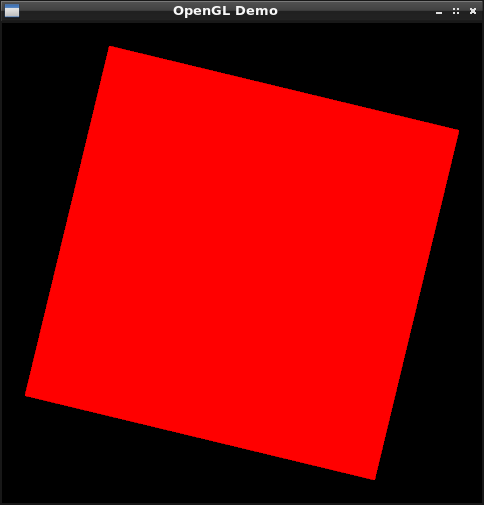 It supports both Linux and Windows. The Windows’ build is static, so it compiles to a single, easily distributable, standalone binary. With some minor tweaking it would probably support the BSDs as well. For simplicity’s sake, the shaders are baked right into the source as strings, but if you’re extending the demo for your own use, you may want to move them out into their own source files.

I chose OpenGL 3.3 in particular for three reasons:

As far as “desktop” OpenGL goes, 3.3 is currently the prime target.

Until EGL someday fills this role, the process for obtaining an OpenGL context is specific to each operating system, where it’s generally a pain in the butt. GLUT, the OpenGL Utility Toolkit, was a library to make this process uniform across the different platforms. It also normalized user input (keyboard and mouse) and provided some basic (and outdated) utility functions.

I just need a portable library that creates a window, handles keyboard and mouse events in that window, and gives me an OpenGL 3.3 core profile context. FreeGLUT does this well, but we can do better. One problem is that it includes a whole bunch of legacy cruft from GLUT: immediate mode rendering utilities, menus, spaceball support, lots of global state, and only one OpenGL context per process.

One of the biggest problems is that FreeGLUT doesn’t have a swap interval function. This is used to lock the application’s redraw rate to the system’s screen refresh rate, preventing screen tearing and excessive resource consumption. I originally used FreeGLUT for the demo, and, as a workaround, had added my own macro work around this by finding the system’s swap interval function, but it was a total hack.

The demo was initially written with FreeGLUT, but I switched over to GLFW since it’s smaller, simpler, cleaner, and more modern. GLFW also has portable joystick handling. With the plethora of modern context+window creation libraries out there, it seems there’s not much reason to use FreeGLUT anymore.

SDL 2.0 would also be an excellent choice. It goes beyond GLFW with threading, audio, networking, image loading, and timers: basically all the stuff you’d need when writing a game.

I’m sure there are some other good alternatives, especially when you’re not sticking to plain C, but these are the libraries I’m familiar with at the time of this article.

If you didn’t think the interface between OpenGL and the operating system was messy enough, I have good news for you. Neither the operating system nor the video card drivers are going to provide any of the correct headers, nor will you have anything meaningful to link against! For these, you’re on your own.

The OpenGL Extension Wrangler Library (GLEW) was invented solve this problem. It dynamically loads the system’s OpenGL libraries and finds all the relevant functions at run time. That way your application avoids linking to anything too specific. At compile time, it provides the headers defining all of the OpenGL functions.

Over the years, GLEW has become outdated, to this day having no support for core profile. So instead I used a replacement called gl3w. It’s just like GLEW, but, as the name suggests, oriented around core profile … exactly what I needed. Unlike GLEW, it is generated directly from Kronos’ documentation by a script. In practice, you drop the generated code directly into your project (embedded) rather than rely on the system to provide it as a library.

A great (and probably better) alternative to gl3w is glLoadgen. It’s the same idea — an automatically generated OpenGL loader — but allows for full customization of the output, such as the inclusion of select OpenGL extensions.

While I hope it serves an educational resources for others, I primarily have it for my own record-keeping, pedagogical, and reference purposes, born out of a weekend’s worth of research. It’s a starting point for future projects, and it’s somewhere easy to start when I want to experiment with an idea.

Plus, someday I want to write a sweet, standalone game with fancy OpenGL graphics.