My wife and I are huge webcomic fans. The web is the medium that the comic strip industry needed badly for decades, and, with Patreon and such today, we’re now living in a golden age of comics. As of this writing, I currently follow … let’s see … 39 different web comics.

My first exposure to comics was in my childhood when I got my hands on Bill Watterson’s Something Under the Bed Is Drooling (Calvin and Hobbes). This gave me very high expectations of the Sunday comics section of the newspaper when I’d read it at my grandmother’s house. Those hopes were shattered as I discovered just how awful nationally syndicated comic strips are: mostly watered down, lowest common denominator stuff like Garfield, Family Circus, Cathy, B.C., etc.

During Calvin and Hobbes’s original run, Bill Watterson wrote about his struggles with the newspapers and the Universal Press Syndicate, one of the organizations responsible for this mess. Newspapers and the Syndicate pushed for smaller frames and shorter comics. Authors were required to plan around newspapers removing frames for layout purposes. Many newspapers would drop comics that need meet stringent content limitations — a line that even Calvin and Hobbes crossed on occasion. Authors had little control over how their work was published.

Those days are over. Today’s authors can cheaply host their comics on the web — webcomics — with full control over content, layout, and schedule. If they even try to monetize at all, it’s generally through advertising, merchandising, or reader donations. Some do it all in their free time, while for others it’s part or even full time employment. The number of regular readers of a single webcomic can be just a handful of people, or up to millions of people. The role of the middleman is somewhere between diminished to non-existent. This is great, because newspapers would never publish the vast majority of the comics I read every day.

I’ve been fortunate to meet a couple of my favorite webcomic authors. Here’s a picture of my wife posing with Anthony Clark of Nedroid Picture Diary at the Small Press Expo. 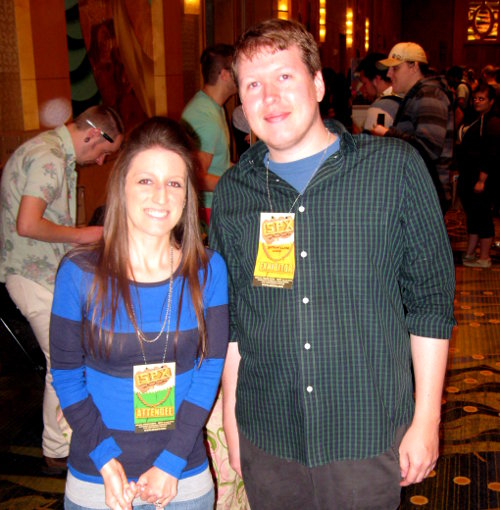 I’ve also met Philippa Rice of My Cardboard Life. (Sorry, no picture for this one, since taking pictures with people isn’t really my thing.)

Over the years I’ve seen webcomic authors blunder with the web as a technology. In my experience it’s been disproportionate, with mistakes made more often by them than the bloggers I follow. I suspect that this is because blogs I follow tend to be computing related and so their authors have high proficiency in computing. The same is not necessarily true of the webcomics I follow.

Since I want to see this medium continue to thrive, and to do so in a way friendly to my own preferences, I’d like to share some tips to avoid common mistakes. Some of these apply more broadly than webcomics.

If you’re using a host designed for webcomics or similar, such as Tumblr, a lot of this stuff will be correct by default without any additional work on your part. However, you should still be aware of common problems because you may unwittingly go out of your way to break things.

Every time you publish on the web, your content is accessible through some specific URL: that sequence of characters that starts with “http”. Each individual comic should be accessible through a unique, unchanging URL. That last adjective is critically important. That URL should point to the same comic for as long as possible — ideally until the heat death of the universe. This will be affected by problems such as your host going down, but the impact should only be temporary and short. A URL is a promise.

People will be using this URL to share your comics with others. They’ll make posts on other websites linking to your comic. They’ll e-mail that URLs to friends and family. Once you’ve published, you no longer control how that URL is used.

On several occasions I’ve seen authors break all their URLs after revamping their site. For example, the previously the URL contained the date but the new URL is only the domain and the title. That breaks thousands of links all over the Internet. Visitors using those old links will be welcomed with an ugly “404 Not Found” — or worse, as I’ve seen more than once, a “200 Found” blank page. These are missed opportunities for new readers.

If you really must change your URLs, the next best thing is to use an HTTP “301 Moved Permanently” and redirect to the new URL. This will leave all those old links intact and encourage new links to use the new address. If you don’t know how this works, ask your local computer geek about it.

You should also avoid having multiple URLs for the same content without a redirect. Search engines will punish you for it and it’s confusing for users. Pick one URL as the canonical URL for a comic, and if you’ve published any other URLs (short URLs, etc.), use the previously mentioned “301 Moved Permanently” to redirect to the canonical URL.

Your main page probably lists all your comics starting from the most recent. This is a good design and doesn’t violate anything I previously said. That’s not the URL for any particular comic, but to the main page, which also serves as the list of recent comics. I strongly recommend that the comics on the main page are also hyperlinks to their specific URL. Users naturally expect to find the comic’s URL by clicking on the comic’s image.

Have an Atom or RSS feed

Comics without feeds is much less of a problem than it used to be, but it still comes up on occasion. If you need to pick between Atom and RSS, I recommend Atom, but, honestly, it’s only important that you have a valid feed with a date. You don’t even need to put the comic in the feed itself (possibly costing you ad revenue), just a link to the comic’s URL is fine. It’s main purpose is to say, “hey, there’s a new comic up!”

You may not use Atom/RSS yourself, but your readers will appreciate it. Many of us don’t use centralized services like Facebook, Twitter, or Google+, and want to follow your work without signing up for a third-party service. Atom/RSS is the widely-accepted decentralized method for syndication on the web.

Web feeds are really easy; it’s just an XML file on your website that lists the most recent content. A validator can help you ensure you’ve done it correctly.

One of the biggest barriers to sharing a comic is a lack of title. For example, if a reader is going to post your comic on reddit, they need to enter the comic’s URL and its title. If the comic doesn’t have a title, then this person will need to make one up. There’s two problems with this:

At minimum your title should appear in the <title> element of the page so that it shows up in the browser tab and browser’s window title. The title of the individual comic should come before the title of the whole website, since that shows up better in search engines. The title should also appear somewhere near the top of page for easy clipboard copying, though it may be worth leaving out depending on the style of your comic.

A page without a <title> element looks amateur, so don’t do that!

Think of the future and include dates

This is one of those things that’s important anywhere on the web and is often violated by blog articles as well. Far too much content is published without a date. Dates put your comic in context, especially if it’s about something topical. It also helps users navigate your content though time.

Putting the date in the URL is sufficient — even preferred — if you didn’t want to display it on the page proper. Your Atom/RSS should always have the comic’s date. I personally benefit from a date-time precision down to the publication hour. Some comics/articles are always published as “midnight” even when posted in the afternoon, which has the jarring effect of inserting it in time before a bunch of things I’ve already read.

When I notice one of the previous problems, particularly when they arise in comics I’m already following, I’d like to inform you of the problem. Or perhaps I want to compliment you on a well-made comic and you don’t have a comments section. I can only do this if you include some sort of contact information. An e-mail address, even in an anti-spam image form, is preferable but not strictly required.

Take advantage of the medium and go big

Comics published in newspapers are really tiny because newspaper editors want to cram a bunch of them onto a couple of pages. You’re not operating under these limitations, so fight the urge to copy that familiar format. Your canvas is practically infinite, so make big, colorful webcomics. The only limit is your readers’ screen resolution.