I recently released an Emacs package called x86-lookup. Given a mnemonic, Emacs will open up a local copy of an Intel’s software developer manual PDF at the page documenting the instruction. It complements nasm-mode, released earlier this year.

x86-lookup is also available from MELPA.

To use it, you’ll need Poppler’s pdftotext command line program — used to build an index of the PDF — and a copy of the complete Volume 2 of Intel’s instruction set manual. There’s only one command to worry about: M-x x86-lookup.

This package should be familiar to anyone who’s used javadoc-lookup, one of my older packages. It has a common underlying itch: the context switch to read API documentation while coding should have as little friction as possible, otherwise I’m discouraged from doing it. In an ideal world I wouldn’t ever need to check documentation because it’s already in my head. By visiting documentation frequently with ease, it’s going to become familiar that much faster and I’ll be reaching for it less and less, approaching the ideal.

I picked up x86 assembly [about a year ago][x86] and for the first few months I struggled to find a good online reference for the instruction set. There are little scraps here and there, but not much of substance. The big exception is Félix Cloutier’s reference, which is an amazingly well-done HTML conversion of Intel’s PDF manuals. Unfortunately I could never get it working locally to generate my own. There’s also the X86 Opcode and Instruction Reference, but it’s more for machines than humans.

I avoided the official x86 documentation for awhile, thinking it would be too opaque, at least until I became more accustomed to the instruction set. But really, it’s not bad! With a handle on the basics, I would encourage anyone to dive into either Intel’s or AMD’s manuals. The reason there’s not much online in HTML form is because these manuals are nearly everything you need.

I chose Intel’s manuals for x86-lookup because I’m more familiar with it, it’s more popular, it’s (slightly) easier to parse, it’s offered as a single PDF, and it’s more complete. The regular expression for finding instructions is tuned for Intel’s manual and it won’t work with AMD’s manuals.

For a couple months prior to writing x86-lookup, I had a couple of scratch functions to very roughly accomplish the same thing. The tipping point for formalizing it was that last month I wrote my own x86 assembler. A single mnemonic often has a dozen or more different opcodes depending on the instruction’s operands, and there are often several ways to encode the same operation. I was frequently looking up opcodes, and navigating the PDF quickly became a real chore. I only needed about 80 different opcodes, so I was just adding them to the assembler’s internal table manually as needed.

How does it work?

Say you want to look up the instruction RDRAND. 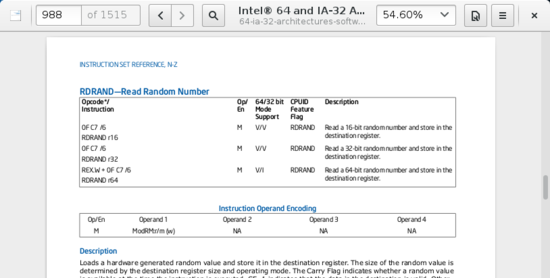 Initially Emacs has no idea what page this is on, so the first step is to build an index mapping mnemonics to pages. x86-lookup runs the pdftotext command line program on the PDF and loads the result into a temporary buffer.

The killer feature of pdftotext is that it emits FORM FEED (U+0012) characters between pages. Think of these as page breaks. By counting form feed characters, x86-lookup can track the page for any part of the document. In fact, Emacs is already set up to do this with its forward-page and backward-page commands. So to build the index, x86-lookup steps forward page-by-page looking for mnemonics, keeping note of the page. Since this process typically takes about 10 seconds, the index is cached in a file (see x86-lookup-cache-directory) for future use. It only needs to happen once for a particular manual on a particular computer.

The mnemonic listing is slightly incomplete, so x86-lookup expands certain mnemonics into the familiar set. For example, all the conditional jumps are listed under “Jcc,” but this is probably not what you’d expect to look up. I compared x86-lookup’s mnemonic listing against NASM/nasm-mode’s mnemonics to ensure everything was accounted for. Both packages benefited from this process.

Once the index is built, pdftotext is no longer needed. If you’re desperate and don’t have this program available, you can borrow the index file from another computer. But you’re on your own for figuring that out!

So to look up RDRAND, x86-lookup checks the index for the page number and invokes a PDF reader on that page. This is where not all PDF readers are created equal. There’s no convention for opening a PDF to a particular page and each PDF reader differs. Some don’t even support it. To deal with this, x86-lookup has a function specialized for different PDF readers. Similar to browse-url-browser-function, x86-lookup has x86-lookup-browse-pdf-function.

By default it tries to open the PDF for viewing within Emacs (did you know Emacs is a PDF viewer?), falling back to on options if the feature is unavailable. I welcome pull requests for any PDF readers not yet supported by x86-lookup. Perhaps this functionality deserves its own package.

That’s it! It’s a simple feature that has already saved me a lot of time. If you’re ever programming in x86 assembly, give x86-lookup a spin.