It’s been two years since I last wrote about Elfeed, my Atom/RSS feed reader for Emacs. I’ve used it every single day since, and I continue to maintain it with help from the community. So far 18 people besides me have contributed commits. Over the last couple of years it’s accumulated some new features, some more obvious than others.

Every time I mark a new release, I update the ChangeLog at the top of elfeed.el which lists what’s new. Since it’s easy to overlook many of the newer useful features, I thought I’d list the more important ones here.

You can now customize entry faces through elfeed-search-face-alist. This variable maps tags to faces. An entry inherits the face of any tag it carries. Previously “unread” was a special tag that got a bold face, but this is now implemented as nothing more than an initial entry in the alist. 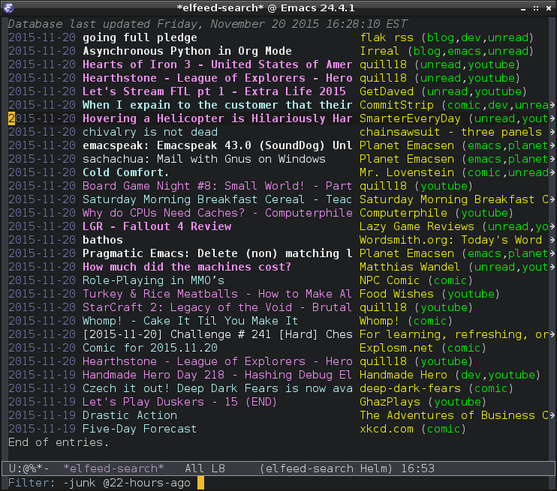 I’ve been using it to mark different kinds of content (videos, podcasts, comics) with different colors.

You can specify the starting tags for entries from particular feeds directly in the feed listing. This has been a feature for awhile now, but it’s not something you’d want to miss. It started out as a feature in my personal configuration that eventually migrated into Elfeed proper.

For example, your elfeed-feeds may initially look like this, especially if you imported from OPML.

If you wanted certain tags applied to entries from each, you would need to putz around with elfeed-make-tagger. For the most common case — apply certain tags to all entries from a URL — it’s much simpler to specify the information as part of the listing itself,

Today I only use custom tagger functions in my own configuration to filter within a couple of particularly noisy feeds.

Metadata is more for Elfeed extensions (i.e. elfeed-org) than regular users. You can attach arbitrary, readable metadata to any Elfeed object (entry, feed). This metadata is automatically stored in the database. It’s a plist.

Metadata is accessed entirely through one setf-able function: elfeed-meta. For example, you might want to track when you’ve read something, not just that you’ve read it. You could use this to selectively update certain feeds or just to evaluate your own habits.

Second, I wanted to make it easy for extension authors to store their own data. I still imagine an extension someday to update feeds intelligently based on their history. For example, the database doesn’t track when the feed was last fetched, just the date of the most recent entry (if any). A smart-update extension could use metadata to tag feeds with this information.

Elfeed itself already uses two metadata keys: :failures on feeds and :title on both. :failures counts the total number of times fetching that feed resulted in an error. You could use this get a listing of troublesome feeds like so,

You can invert filter components by prefixing them with !. For example, say you’re looking at all my posts from the past 6 months:

But say you’re tired of me and decide you want to see every entry from the past 6 months excluding my posts.

Normally you limit the number of results by date, but you can now limit the result by count using #n. For example, to see my most recent 12 posts regardless of date,

This is used internally in the live filter to limit the number of results to the height of the screen. If you noticed that live filtering has been much more responsive in the last few months, this is probably why.

Elfeed properly integrates with Emacs’ bookmarks (thanks to groks). You can bookmark the current filter with M-x bookmark-set (C-x r m). By default, Emacs will persist bookmarks between sessions. To revisit a filter in the future, M-x bookmark-jump (C-x r b).

Since this requires no configuration, this may serve as an easy replacement for manually building “view” toggles — filters bound to certain keys — which I know many users have done, including me.

If you’ve updated very recently, you probably noticed Elfeed got a brand new header. Previously it faked a header by writing to the first line of the buffer. This is because somehow I had no idea Emacs had official support for buffer headers (despite notmuch using them all this time).

The new header includes additional information, such as the current filter, the number of unread entries, the total number of entries, and the number of unique feeds currently in view. You’ll see this as <unread>/<total>:<feeds> in the middle of the header.

As of this writing, the new header has not been made part of a formal release. So if you’re only tracking stable releases, you won’t see this for awhile longer.

You can supply your own header via elfeed-search-header-function (thanks to Gergely Nagy).

As you already know, in the search buffer listing you can press G to update your feeds. But did you know you it takes a prefix argument? Run as C-u G, it only updates feeds with entries currently listed in the buffer.

As of this writing, this is another feature not yet in a formal release. I’d been wanting something like this for awhile but couldn’t think of a reasonable interface. Directly prompting the user for feeds is neither elegant nor composable. However, groks suggested the prefix argument, which composes perfectly with Elfeed’s existing idioms.

In addition to custom faces, there are a number of ways to customize the listing.

Gergely Nagy has been throwing lots of commits at me over the last couple of weeks to open up lots of Elfeed’s behavior to customization, so there are more to come.

Apologies about any features I missed or anyone I forgot to mention who’s made contributions. The above comes from my ChangeLogs, the commit log, the GitHub issue listing, and my own memory, so I’m likely to have forgotten some things. A couple of these features I had forgotten about myself!