For over a decade now, GNU Make has almost exclusively been my build system of choice, either directly or indirectly. Unfortunately this means I unnecessarily depend on some GNU extensions — an annoyance when porting to the BSDs. In an effort to increase the portability of my Makefiles, I recently read the POSIX make specification. I learned two important things: 1) (update: I’ve changed my mind), and 2) make’s macro assignment mechanism is Turing-complete.

If you want to see it in action for yourself before reading further, here’s a Makefile that implements Conway’s Game of Life (40x40) using only macro assignments.

Run it with any make program in an ANSI terminal. It must literally be named life.mak. Beware: if you run it longer than a few minutes, your computer may begin thrashing.

It’s 100% POSIX-compatible except for the sleep 0.1 (fractional sleep), which is only needed for visual effect.

Unlike virtually every real world implementation, POSIX make doesn’t support conditional parts. For example, you might want your Makefile’s behavior to change depending on the value of certain variables. In GNU Make it looks like this:

If the goal is to write a strictly POSIX Makefile, how could I work around the lack of conditional parts and maintain a similar interface? The selection of macro/variable to evaluate can be dynamically selected, allowing for some useful tricks. First define the option’s default:

Then define both sets of flags:

Now dynamically select one of these macros for assignment to EXTRA_FLAGS.

The assignment on the command line overrides the assignment in the Makefile, so the user gets to override USE_FOO.

Before reading the POSIX specification, I didn’t realize that the left side of an assignment can get the same treatment. For example, if I really want the “if defined” behavior back, I can use the macro to mangle the left-hand side. For example,

Caveat: If DEBUG is set to empty, it may still result in true for ifdef depending on which make flavor you’re using, but will always appear to be unset in this hack.

This last case had me thinking: This is very similar to the (ab)use of the x86 mov instruction in mov is Turing-complete. These macro assignments alone should be enough to compute any algorithm.

Macro names are just keys to a global associative array. This can be used to build lookup tables. Here’s a Makefile to “compute” the square root of integers between 0 and 10.

The BSD flavors of make have a -V option for printing variables, which is an easy way to retrieve output. I used an “immediate” assignment (:=) for result since some versions of make won’t evaluate the expression before -V printing.

Without -V, a default target could be used instead:

There are no math operators, so performing arithmetic requires some creativity. For example, integers could be represented as a series of x characters. The number 4 is xxxx, the number 6 is xxxxxx, etc. Addition is concatenation (note: macros can have + in their names):

However, since there’s no way to “slice” a value, subtraction isn’t possible. A more realistic approach to arithmetic would require lookup tables.

Branching could be achieved through more lookup tables. For example,

Or using the DEBUG trick above, use the condition to mask out the results of the unwanted branch. This is similar to the mov paper.

Looping is a tricky problem. However, one of the most common build (anti?)patterns is the recursive Makefile. Borrowing from the mov paper, which used an unconditional jump to restart the program from the beginning, for a Makefile Turing-completeness I can invoke the Makefile recursively, restarting the program with a new set of inputs.

Remember the print target above? I can loop by invoking make again with new inputs in this target,

Before going any further, now that loops have been added, the natural next question is halting. In reality, the operating system will take care of that after some millions of make processes have carelessly been invoked by this horribly inefficient scheme. However, we can do better. The program can clobber the MAKE variable when it’s ready to halt. Let’s formalize it.

To halt, the program just needs to clear loop.

Suppose we want to count down to 0. There will be an initial count:

The last line will be used to halt by clearing the name on the right side. This is three star territory.

The result (current iteration) loop value is computed from the lookup table.

The next loop value is passed via args. If loop was cleared above, this result will be discarded.

With all that in place, invoking the Makefile will print a countdown from 5 to 0 and quit. This is the general structure for the Game of Life macro program.

In the Game of Life program — the one linked at the top of this article — each cell is stored in a macro named xxyy, after its position. The top-left most cell is named 0000, then going left to right, 0100, 0200, etc. Providing input is a matter of assigning each of these macros. I chose X for alive and - for dead, but, as you’ll see, any two characters permitted in macro names would work as well.

The next part should be no surprise: The rules of the Game of Life are encoded as a 512-entry lookup table. The key is formed by concatenating the cell’s value along with all its neighbors, with itself in the center. 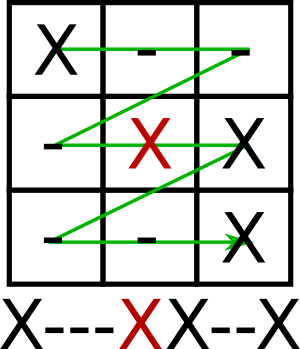 Note: The two right-hand X values here are the cell coming to life (exactly three living neighbors). Computing the next value (n0101) for 0101 is done like so:

Given these results, constructing the input to the next loop is simple:

The display output, to be given to printf, is built similarly:

In the real version, this is decorated with an ANSI escape code that clears the terminal. The printf interprets the escape byte (\033) so that it doesn’t need to appear literally in the source.

And that’s all there is to it: Conway’s Game of Life running in a Makefile. Life, uh, finds a way. 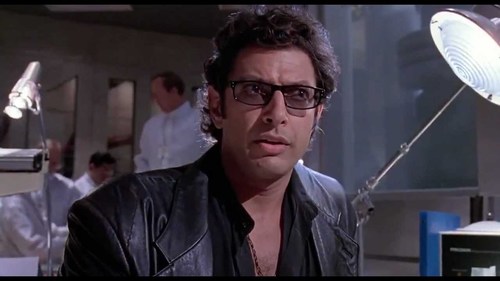