Update 2020: A DOS build of Connect Four was featured on GET OFF MY LAWN.

Monte Carlo tree search (MCTS) is the most impressive game artificial intelligence I’ve ever used. At its core it simulates a large number of games (playouts), starting from the current game state, using random moves for each player. Then it simply picks the move where it won most often. This description is sufficient to spot one of its most valuable features: MCTS requires no knowledge of strategy or effective play. The game’s rules — enough to simulate the game — are all that’s needed to allow the AI to make decent moves. Expert knowledge still makes for a stronger AI, but, more many games, it’s unnecessary to construct a decent opponent.

A second valuable feature is that it’s easy to parallelize. Unlike alpha-beta pruning, which doesn’t mix well with parallel searches of a Minimax tree, Monte Carlo simulations are practically independent and can be run in parallel.

Finally, the third valuable feature is that the search can be stopped at any time. The completion of any single simulation is as good a stopping point as any. It could be due to a time limit, a memory limit, or both. In general, the algorithm converges to a best move rather than suddenly discovering it. The good moves are identified quickly, and further simulations work to choose among them. More simulations make for better moves, with exponentially diminishing returns. Contrasted with Minimax, stopping early has the risk that the good moves were never explored at all.

To try out MCTS myself, I wrote two games employing it:

They’re both written in C, for both unix-like and Windows, and should be easy to build. I challenge you to beat them both. The Yavalath AI is easier to beat due to having blind spots, which I’ll discuss below. The Connect Four AI is more difficult and will likely take a number of tries. 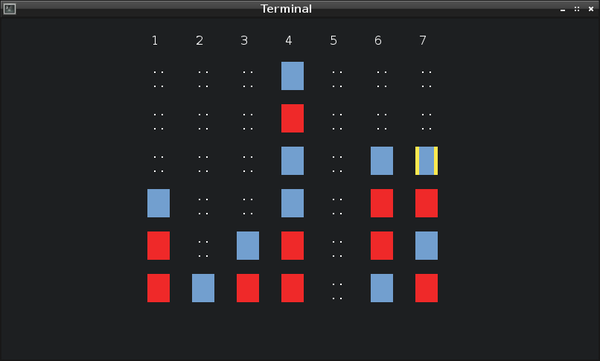 MCTS works very well with Connect Four, and only requires modest resources: 32MB of memory to store the results of random playouts, and 500,000 game simulations. With a few tweaks, it can even be run in DOSBox. It stops when it hits either of those limits. In theory, increasing both would make for stronger moves, but in practice I can’t detect any difference. It’s like computing pi with Monte Carlo, where eventually it just runs out of precision to make any more progress.

Based on my simplified description above, you might wonder why it needs all that memory. Not only does MCTS need to track its win/loss ratio for each available move from the current state, it tracks the win/loss ratio for moves in the states behind those moves. A large chunk of the game tree is kept in memory to track all of the playout results. This is why MCTS needs a lot more memory than Minimax, which can discard branches that have been searched.

A convenient property of this tree is that the branch taken in the actual game can be re-used in a future search. The root of the tree becomes the node representing the taken game state, which has already seen a number of playouts. Even better, MCTS is weighted towards exploring good moves over bad moves, and good moves are more likely to be taken in the real game. In general, a significant portion of the tree gets to be reused in a future search.

I’m going to skip most of the details of the algorithm itself and focus on my implementation. Other articles do a better job at detailing the algorithm than I could.

My Connect Four engine doesn’t use dynamic allocation for this tree (or at all). Instead it manages a static buffer — an array of tree nodes, each representing a game state. All nodes are initially chained together into a linked list of free nodes. As the tree is built, nodes are pulled off the free list and linked together into a tree. When the game advances to the next state, nodes on unreachable branches are added back to the free list.

If at any point the free list is empty when a new node is needed, the current search aborts. This is the out-of-memory condition, and no more searching can be performed.

Rather than native C pointers, the structure uses 32-bit indexes into the master array. This saves a lot of memory on 64-bit systems, and the structure is the same size no matter the pointer size of the host. The next field points to the next state for the nth move. Since 0 is a valid index, -1 represents null (CONNECT4_NULL).

Each column is a potential move, so there are CONNECT4_WIDTH possible moves at any given state. Each move has a floating point score and a total number of playouts through that move. In my implementation, the search can also halt due to an overflow in a playout counter. The search can no longer be tracked in this representation, so it has to stop. This generally only happens when the game is nearly over and it’s grinding away on a small number of possibilities.

Note that the actual game state (piece positions) is not tracked in the node structure. That’s because it’s implicit. We know the state of the game at the root, and simulating the moves while descending the tree will keep track of the board state at the current node. That’s more memory savings.

The state itself is a pair of bitboards, one for each player. Each position on the grid gets a bit on each bitboard. The bitboard is very fast to manipulate, and win states are checked with just a handful of bit operations. My intention was to make playouts as fast as possible.

The nodes_available and nodes_allocated are not necessary for correctness nor speed. They’re useful for diagnostics and debugging.

All the functions that operate on these two structures are straightforward, except for connect4_playout, a recursive function which implements the bulk of MCTS. Depending on the state of the node it’s at, it does one of two things:

That’s pretty much all there is to it. 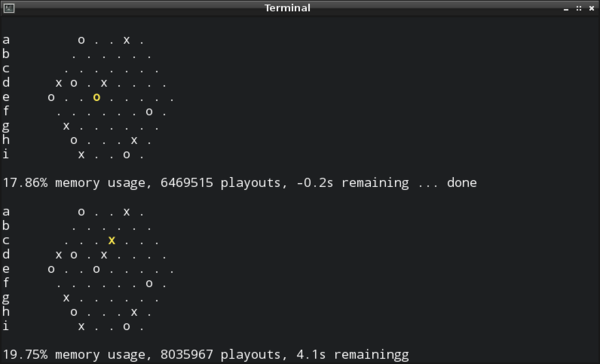 Yavalath is a board game invented by a computer program. It’s a pretty fascinating story. The depth and strategy are disproportionately deep relative to its dead simple rules: Get four in a row without first getting three in a row. The game revolves around forced moves.

The engine is structured almost identically to the Connect Four engine. It uses 32-bit indexes instead of pointers. The game state is a pair of bitboards, with end-game masks computed at compile time via metaprogramming. The AI allocates the tree from a single, massive buffer — multiple GBs in this case, dynamically scaled to the available physical memory. And the core MCTS function is nearly identical.

One important difference is that identical game states — states where the pieces on the board are the same, but the node was reached through a different series of moves — are coalesced into a single state in the tree. This state deduplication is done through a hash table. This saves on memory and allows multiple different paths through the game tree to share playouts. It comes at a cost of including the game state in the node (so it can be identified in the hash table) and reference counting the nodes (since they might have more than one parent).

Unfortunately the AI has blind spots, and once you learn to spot them it becomes easy to beat consistently. It can’t spot certain kinds of forced moves, so it always falls for the same tricks. The official Yavalath AI is slightly stronger than mine, but has a similar blindness. I think MCTS just isn’t quite a good fit for Yavalath.

The AI’s blindness is caused by shallow traps, a common problem for MCTS. It’s what makes MCTS a poor fit for Chess. A shallow trap is a branch in the game tree where the game will abruptly end in a small number of turns. If the random tree search doesn’t luckily stumble upon a trap during its random traversal, it can’t take it into account in its final decision. A skilled player will lead the game towards one of these traps, and the AI will blunder along, not realizing what’s happened until its too late.

I almost feel bad for it when this happens. If you watch the memory usage and number of playouts, once it falls into a trap, you’ll see it using almost no memory while performing a ton of playouts. It’s desperately, frantically searching for a way out of the trap. But it’s too late, little AI.

Another Tool in the Toolbelt

I’m really happy to have sunk a couple weekends into playing with MCTS. It’s not always a great fit, as seen with Yavalath, but it’s a really neat algorithm. Now that I’ve wrapped my head around it, I’ll be ready to use it should I run into an appropriate problem in the future.