The most recent Smarter Every Day (#172) explains a phenomenon that results from rolling shutter. You’ve likely seen this effect in some of your own digital photographs. When a CMOS digital camera captures a picture, it reads one row of the sensor at a time. If the subject of the picture is a fast-moving object (relative to the camera), then the subject will change significantly while the image is being captured, giving strange, unreal results: 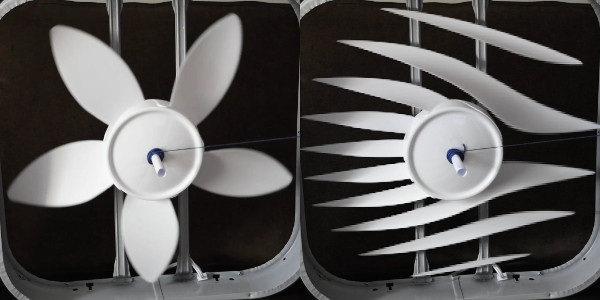 In the Smarter Every Day video, Destin illustrates the effect by simulating rolling shutter using a short video clip. In each frame of the video, a few additional rows are locked in place, showing the effect in slow motion, making it easier to understand.

At the end of the video he thanks a friend for figuring out how to get After Effects to simulate rolling shutter. After thinking about this for a moment, I figured I could easily accomplish this myself with just a bit of C, without any libraries. The video above this paragraph is the result.

I previously described a technique to edit and manipulate video without any formal video editing tools. A unix pipeline is sufficient for doing minor video editing, especially without sound. The program at the front of the pipe decodes the video into a raw, uncompressed format, such as YUV4MPEG or PPM. The tools in the middle losslessly manipulate this data to achieve the desired effect (watermark, scaling, etc.). Finally, the tool at the end encodes the video into a standard format.

For the “decode” program I’ll be using ffmpeg now that it’s back in the Debian repositories. You can throw a video in virtually any format at it and it will write PPM frames to standard output. For the encoder I’ll be using the x264 command line program, though ffmpeg could handle this part as well. Without any filters in the middle, this example will just re-encode a video:

The filter tools in the middle only need to read and write in the raw image format. They’re a little bit like shaders, and they’re easy to write. In this case, I’ll write C program that simulates rolling shutter. The filter could be written in any language that can read and write binary data from standard input to standard output.

Update: It appears that input PPM streams are a rather recent feature of libavformat (a.k.a lavf, used by x264). Support for PPM input first appeared in libavformat 3.1 (released June 26th, 2016). If you’re using an older version of libavformat, you’ll need to stick ppmtoy4m in front of x264 in the processing pipeline.

In the past, my go to for raw video data has been loose PPM frames and YUV4MPEG streams (via ppmtoy4m). Fortunately, over the years a lot of tools have gained the ability to manipulate streams of PPM images, which is a much more convenient format. Despite being raw video data, YUV4MPEG is still a fairly complex format with lots of options and annoying colorspace concerns. PPM is simple RGB without complications. The header is just text:

The maximum depth is virtually always 255. A smaller value reduces the image’s dynamic range without reducing the size. A larger value involves byte-order issues (endian). For video frame data, the file will typically look like:

Unfortunately the format is actually a little more flexible than this. Except for the new line (LF, 0x0A) after the maximum depth, the whitespace is arbitrary and comments starting with # are permitted. Since the tools I’m using won’t produce comments, I’m going to ignore that detail. I’ll also assume the maximum depth is always 255.

Here’s the structure I used to represent a PPM image, just one frame of video. I’m using a flexible array member to pack the data at the end of the structure.

Next a function to allocate a frame:

We’ll need a way to write the frames we’ve created.

Finally, a function to read a frame, reusing an existing buffer if possible. The most complex part of the whole program is just parsing the PPM header. The %*c in the scanf() specifically consumes the line feed immediately following the maximum depth.

Since this program will only be part of a pipeline, I’m not worried about checking the results of fwrite() and fread(). The process will be killed by the shell if something goes wrong with the pipes. However, if we’re out of video data and get an EOF, scanf() will fail, indicating the EOF, which is normal and can be handled cleanly.

That’s all the infrastructure we need to built an identity filter that passes frames through unchanged:

Processing a frame is just matter of adding some stuff to the body of the while loop.

The shutter_step controls how many rows are capture per frame of video. Generally capturing one row per frame is too slow for the simulation. For a 1080p video, that’s 1,080 frames for the entire simulation: 18 seconds at 60 FPS or 36 seconds at 30 FPS. If this program were to accept command line arguments, controlling the shutter rate would be one of the options.

Putting it all together:

Here are some of the results for different shutter rates: 1, 3, 5, 8, 10, and 15 rows per frame. Feel free to right-click and “View Video” to see the full resolution video.

This post contains the full source in parts, but here it is all together:

Here’s the original video, filmed by my wife using her Nikon D5500, in case you want to try it for yourself:

It took much longer to figure out the string-pulling contraption to slowly spin the fan at a constant rate than it took to write the C filter program.

On Hacker News, morecoffee shared a video of the second order effect (direct link), where the rolling shutter speed changes over time.