Last week I was discussing CVE-2017-7529 with my intern. Specially crafted input to Nginx causes an integer overflow which has the potential to leak sensitive information. But how could an integer overflow be abused to trick a program into leaking information? To answer this question, I put together the simplest practical example I could imagine.

This small C program converts a vector image from a custom format (described below) into a Netpbm image, a conveniently simple format. The program defensively and carefully parses its input, but still makes a subtle, fatal mistake. This mistake not only leads to sensitive information disclosure, but, with a more sophisticated attack, could be used to execute arbitrary code.

After getting the hang of the interface for the program, I encourage you to take some time to work out an exploit yourself. Regardless, I’ll reveal a functioning exploit and explain how it works.

The input format is line-oriented and very similar to Netpbm itself. The first line is the header, starting with the magic number V2 (ASCII) followed by the image dimensions. The target output format is Netpbm’s “P2” (text gray scale) format, so the “V2” parallels it. The file must end with a newline.

What follows is drawing commands, one per line. For example, the s command sets the value of a particular pixel.

Since it’s not important for the demonstration, this is the only command I implemented. It’s easy to imagine additional commands to draw lines, circles, Bezier curves, etc.

Here’s an example (example.txt) that draws a single white point in the middle of the image: 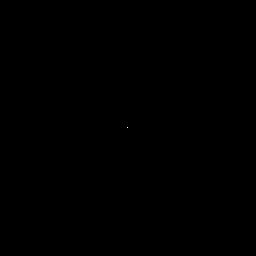 However, you will notice that when you run the rendering tool, it prompts you for username and password. This is silly, of course, but it’s an excuse to get “sensitive” information into memory. It will accept any username/password combination where the username and password don’t match each other. The key is this: It’s possible to craft a valid image that leaks the the entered password.

Tour of the implementation

Without spoiling anything yet, let’s look at how this program works. The first thing to notice is that I’m using a custom “obstack” allocator instead of malloc() and free(). Real-world allocators have some defenses against this particular vulnerability. Plus a specific exploit would have to target a specific libc. By using my own allocator, the exploit will mostly be portable, making for a better and easier demonstration.

The allocator interface should be pretty self-explanatory, except for two details. This is an obstack allocator, so freeing an object also frees every object allocated after it. Also, it doesn’t call malloc() in the background. At initialization you give it a buffer from which to allocate all memory.

There are no vulnerabilities in these functions (I hope!). It’s just here for predictability.

Next here’s a little version of calloc() for the custom allocator. Hmm, I wonder why this is called “naive”…

The main() function parses the header using this wrapper and allocates some zeroed memory:

Then there’s a command processing loop, also using safe_strtoul(). It carefully checks bounds against width and height. Finally it writes out a Netpbm, P2 (.pgm) format.

The vulnerability is in something I’ve shown above. Can you find it?

Did you find it? If you’re on a platform with 64-bit long, here’s your exploit:

And here’s an exploit for 32-bit long:

Here’s how it looks in action. The most obvious result is that the program crashes:

Here are the initial contents of capture.txt:

Where did those junk numbers come from in the image data? Plug them into an ASCII table and you’ll get “mysecret”. Despite allocating the image with naive_calloc(), the password has found its way into the image! How could this be?

What happened is that width * height overflows an unsigned long. (Well, technically speaking, unsigned integers are defined not to overflow in C, wrapping around instead, but it’s really the same thing.) In naive_calloc(), the overflow results in a value of 16, so it only allocates and clears 16 bytes. The requested allocation “succeeds” despite far exceeding the available memory. The caller has been given a lot less memory than expected, and the memory believed to have been allocated contains a password.

The final part that writes the output doesn’t multiply the integers and doesn’t need to test for overflow. It uses a nested loop instead, continuing along with the original, impossible image size.

How do we fix this? Add an overflow check at the beginning of the naive_calloc() function (making it no longer naive). This is what the real calloc() does.

The frightening takeaway is that this check is very easy to forget. It’s a subtle bug with potentially disastrous consequences.

In practice, this sort of program wouldn’t have sensitive data resident in memory. Instead an attacker would target the program’s stack with those s commands — specifically the return pointers — and perform a ROP attack against the application. With the exploit header above and a platform where long the same size as a size_t, the program will behave as if all available memory has been allocated to the image, so the s command could be used to poke custom values anywhere in memory. This is a much more complicated exploit, and it has to contend with ASLR and random stack gap, but it’s feasible.