I recently developed Pokerware, an offline passphrase generator that operates in the same spirit as Diceware. The primary difference is that it uses a shuffled deck of playing cards as its entropy source rather than dice. Draw some cards and use them to select a uniformly random word from a list. Unless you’re some sort of tabletop gaming nerd, a deck of cards is more readily available than five 6-sided dice, which would typically need to be borrowed from the Monopoly board collecting dust on the shelf, then rolled two at a time.

There are various flavors of two different word lists here:

Hardware random number generators are difficult to verify and may not actually be as random as they promise, either intentionally or unintentionally. For the particularly paranoid, Diceware and Pokerware are an easily verifiable alternative for generating secure passphrases for cryptographic purposes. At any time, a deck of 52 playing cards is in one of 52! possible arrangements. That’s more than 225 bits of entropy. If you give your deck a thorough shuffle, it will be in an arrangement that has never been seen before and will never be seen again. Pokerware draws on some of these bits to generate passphrases.

The Pokerware list has 5,304 words (12.4 bits per word), compared to Diceware’s 7,776 words (12.9 bits per word). My goal was to invent a card-drawing scheme that would uniformly select from a list in the same sized ballpark as Diceware. Much smaller and you’d have to memorize more words for the same passphrase strength. Much larger and the words on the list would be more difficult to memorize, since the list would contain longer and less frequently used words. Diceware strikes a nice balance at five dice.

One important difference for me is that I like my Pokerware word lists a lot more than the two official Diceware lists. My lists only have simple, easy-to-remember words (for American English speakers, at least), without any numbers or other short non-words. Pokerware has two official lists, “formal” and “slang,” since my early testers couldn’t agree on which was better. Rather than make a difficult decision, I took the usual route of making no decision at all.

The “formal” list is derived in part from Google’s Ngram Viewer, with my own additional filters and tweaking. It’s called “formal” because the ngrams come from formal publications and represent more formal kinds of speech.

The “slang” list is derived from every reddit comment between December 2005 and May 2017, tamed by the same additional filters. I have this data on hand, so I may as well put it to use. I figured more casually-used words would be easier to remember. Due to my extra filtering, there’s actually a lot of overlap between these lists, so the differences aren’t too significant.

If you have your own word list, perhaps in a different language, you can use the Makefile in the repository to build your own Pokerware lookup table, both plain text and PDF. The PDF is generated using Groff macros.

A word of warning about step 4: If you use software to do the word list lookup, beware that it might save your search/command history — and therefore your passphrase — to a file. For example, the less pager will store search history in ~/.lesshst. It’s easy to prevent that one: 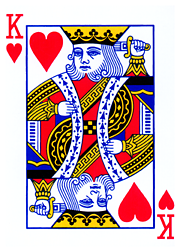 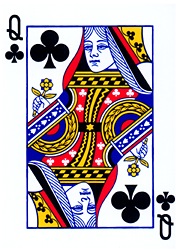 In step 3 you first draw King of Diamonds (KD/K♦), discarding it because it matches the face value of one of your cards from step 2.

Next you draw Four of Spades (4S/4♠), taking spades as your extra suit. 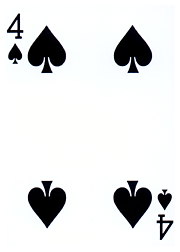 In order, this gives you Queen of Clubs, King of Hearts, and Spades: QCKHS or Q♣K♥♠. This corresponds to “wizard” in the formal word list and would be the first word in your passphrase.

A deck of cards as an office tool

I now have an excuse to keep a deck of cards out on my desk at work. I’ve been using Diceware — or something approximating it since I’m not so paranoid about hardware RNGs — for passwords for over 8 years now. From now I’ll deal new passwords from an in-reach deck of cards. Though typically I need to tweak the results to meet outdated character-composition requirements.