So I’ve been playing a bit of tabletop role-playing games lately, so here’s another game story like my previous Fire Gem tale. I didn’t think it was that interesting, but I found out that some of my friends were sharing it with each other when I wasn’t around.

A recent character was named Flip Foolflim, a chaotic evil halfling rogue. I had selected his secondary language by the roll of the dice, Draconic, and by coincidence we happened to be fighting a lot of dragonborn. Flip could always understand them when they spoke to each other. I was asked why my halfling would know Draconic, so here’s his story. 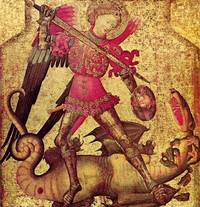 Flip had made friends with a dragon — not a typical friendship, obviously. During their initial encounter this dragon realized a use for the little halfling. Flip would regularly head out from the dragon’s lair to one of the local towns where he would round up a group of naïve adventurers who volunteered slay a “treacherous dragon.” Once at the lair, he would turn on them and join his dragon friend in killing the adventurers and keeping the spoils. It was an arrangement both of them enjoyed.

This little scheme went well for some years until Flip, blinded by his greed, greatly underestimated one particular group. Fortunately for Flip, he discovered his mistake before attempting to backstab the adventurers, and instead joined them in slaying his dragon friend.

Without his home in the dragon lair, he wandered for some time before joining a party of adventurers (the PCs of the recent adventure). He worked with them for some time, though not making any close friends. None of his companions appreciated his thumb collection, cut from the right hands of everyone his party struck down — for those who had hands.

One particular fight wasn’t going so well for his side, a situation that he had experienced before back in the dragon lair. In the middle of the fight Flip kneeled before the opponent, swearing his allegiance, and attacked his own party members (other PCs, including my wife’s character). Neither side liked this change, so he found himself with no friends, meeting his end in that battle.

However, when my friends were discussing this I think it wasn’t so much about the story being interesting but something like, “Hey, did you hear Chris had his character attack the other PCs last week?!”