In a previous article I demonstrated video filtering with C and a unix pipeline. Thanks to the ubiquitous support for the ridiculously simple Netpbm formats — specifically the “Portable PixMap” (.ppm, P6) binary format — it’s trivial to parse and produce image data in any language without image libraries. Video decoders and encoders at the ends of the pipeline do the heavy lifting of processing the complicated video formats actually used to store and transmit video.

Naturally this same technique can be used to produce new video in a simple program. All that’s needed are a few functions to render artifacts — lines, shapes, etc. — to an RGB buffer. With a bit of basic sound synthesis, the same concept can be applied to create audio in a separate audio stream — in this case using the simple (but not as simple as Netpbm) WAV format. Put them together and a small, standalone program can create multimedia.

Here’s the demonstration video I’ll be going through in this article. It animates and visualizes various in-place sorting algorithms (see also). The elements are rendered as colored dots, ordered by hue, with red at 12 o’clock. A dot’s distance from the center is proportional to its corresponding element’s distance from its correct position. Each dot emits a sinusoidal tone with a unique frequency when it swaps places in a particular frame. 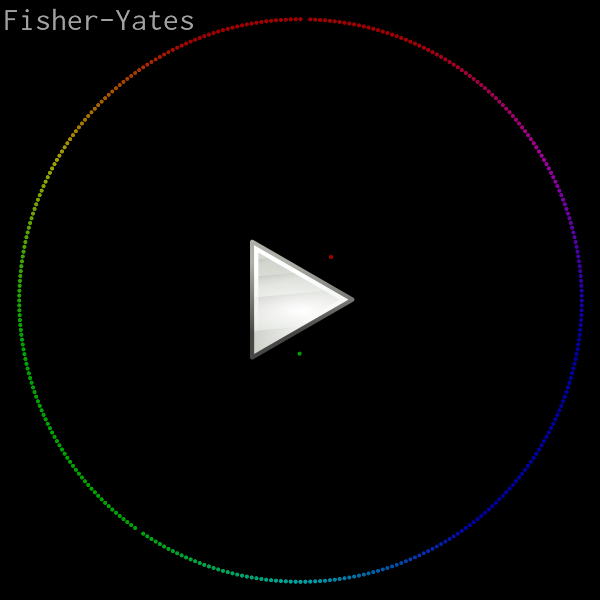 Original credit for this visualization concept goes to w0rthy.

On any modern computer, rendering is real-time, even at 60 FPS, so you may be able to pipe the program’s output directly into your media player of choice. (If not, consider getting a better media player!)

VLC requires some help from ppmtoy4m:

Or you can just encode it to another format. Recent versions of libavformat can input PPM images directly, which means x264 can read the program’s output directly:

By default there is no audio output. I wish there was a nice way to embed audio with the video stream, but this requires a container and that would destroy all the simplicity of this project. So instead, the -a option captures the audio in a separate file. Use ffmpeg to combine the audio and video into a single media file:

You might think you’ll be clever by using mkfifo (i.e. a named pipe) to pipe both audio and video into ffmpeg at the same time. This will only result in a deadlock since neither program is prepared for this. One will be blocked writing one stream while the other is blocked reading on the other stream.

Several years ago my intern and I used the exact same pure C rendering technique to produce these raytracer videos:

I also used this technique to illustrate gap buffers.

This program really only has one purpose: rendering a sorting video with a fixed, square resolution. So rather than write generic image rendering functions, some assumptions will be hard coded. For example, the video size will just be hard coded and assumed square, making it simpler and faster. I chose 800x800 as the default:

Rather than define some sort of color struct with red, green, and blue fields, color will be represented by a 24-bit integer (long). I arbitrarily chose red to be the most significant 8 bits. This has nothing to do with the order of the individual channels in Netpbm since these integers are never dumped out. (This would have stupid byte-order issues anyway.) “Color literals” are particularly convenient and familiar in this format. For example, the constant for pink: 0xff7f7fUL.

In practice the color channels will be operated upon separately, so here are a couple of helper functions to convert the channels between this format and normalized floats (0.0–1.0).

Originally I decided the integer form would be sRGB, and these functions handled the conversion to and from sRGB. Since it had no noticeable effect on the output video, I discarded it. In more sophisticated rendering you may want to take this into account.

The RGB buffer where images are rendered is just a plain old byte buffer with the same pixel format as PPM. The ppm_set() function writes a color to a particular pixel in the buffer, assumed to be S by S pixels. The complement to this function is ppm_get(), which will be needed for blending.

Since the buffer is already in the right format, writing an image is dead simple. I like to flush after each frame so that observers generally see clean, complete frames. It helps in debugging.

If you zoom into one of those dots, you may notice it has a nice smooth edge. Here’s one rendered at 30x the normal resolution. I did not render, then scale this image in another piece of software. This is straight out of the C program. 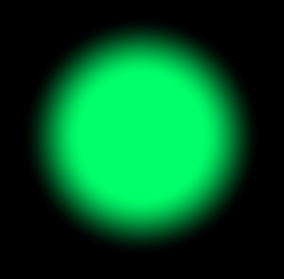 In an early version of this program I used a dumb dot rendering routine. It took a color and a hard, integer pixel coordinate. All the pixels within a certain distance of this coordinate were set to the color, everything else was left alone. This had two bad effects:

Instead the dot’s position is computed in floating point and is actually rendered as if it were between pixels. This is done with a shader-like routine that uses smoothstep — just as found in shader languages — to give the dot a smooth edge. That edge is blended into the image, whether that’s the background or a previously-rendered dot. The input to the smoothstep is the distance from the floating point coordinate to the center (or corner?) of the pixel being rendered, maintaining that between-pixel smoothness.

Rather than dump the whole function here, let’s look at it piece by piece. I have two new constants to define the inner dot radius and the outer dot radius. It’s smooth between these radii.

The dot-drawing function takes the image buffer, the dot’s coordinates, and its foreground color.

The first thing to do is extract the color components.

Next determine the range of pixels over which the dot will be draw. These are based on the two radii and will be used for looping.

Here’s the loop structure. Everything else will be inside the innermost loop. The dx and dy are the floating point distances from the center of the dot.

Use the x and y distances to compute the distance and smoothstep value, which will be the alpha. Within the inner radius the color is on 100%. Outside the outer radius it’s 0%. Elsewhere it’s something in between.

Get the background color, extract its components, and blend the foreground and background according to the computed alpha value. Finally write the pixel back into the buffer.

That’s all it takes to render a smooth dot anywhere in the image.

The array being sorted is just a global variable. This simplifies some of the sorting functions since a few are implemented recursively. They can call for a frame to be rendered without needing to pass the full array. With the dot-drawing routine done, rendering a frame is easy:

The buffer is static since it will be rather large, especially if S is cranked up. Otherwise it’s likely to overflow the stack. The memset() fills it with black. If you wanted a different background color, here’s where you change it.

For each element, compute its delta from the proper array position, which becomes its distance from the center of the image. The angle is based on its actual position. The hue() function (not shown in this article) returns the color for the given element.

With the frame() function complete, all I need is a sorting function that calls frame() at appropriate times. Here are a couple of examples:

To add audio I need to keep track of which elements were swapped in this frame. When producing a frame I need to generate and mix tones for each element that was swapped.

Notice the swap() function above? That’s not just for convenience. That’s also how things are tracked for the audio.

Before we get ahead of ourselves I need to write a WAV header. Without getting into the purpose of each field, just note that the header has 13 fields, followed immediately by 16-bit little endian PCM samples. There will be only one channel (monotone).

Rather than tackle the annoying problem of figuring out the total length of the audio ahead of time, I just wave my hands and write the maximum possible number of bytes (0xffffffff). Most software that can read WAV files will understand this to mean the entire rest of the file contains samples.

The simplest place to do audio synthesis is in frame() right after rendering the image.

With the largest tone frequency at 1kHz, Nyquist says we only need to sample at 2kHz. 8kHz is a very common sample rate and gives some overhead space, making it a good choice. However, I found that audio encoding software was a lot happier to accept the standard CD sample rate of 44.1kHz, so I stuck with that.

The first thing to do is to allocate and zero a buffer for this frame’s samples.

Next determine how many “voices” there are in this frame. This is used to mix the samples by averaging them. If an element was swapped more than once this frame, it’s a little louder than the others — i.e. it’s played twice at the same time, in phase.

Here’s the most complicated part. I use sinf() to produce the sinusoidal wave based on the element’s frequency. I also use a parabola as an envelope to shape the beginning and ending of this tone so that it fades in and fades out. Otherwise you get the nasty, high-frequency “pop” sound as the wave is given a hard cut off.

Finally I write out each sample as a signed 16-bit value. I flush the frame audio just like I flushed the frame image, keeping them somewhat in sync from an outsider’s perspective.

Before returning, reset the swap counter for the next frame.

You may have noticed there was text rendered in the corner of the video announcing the sort function. There’s font bitmap data in font.h which gets sampled to render that text. It’s not terribly complicated, but you’ll have to study the code on your own to see how that works.

This simple video rendering technique has served me well for some years now. All it takes is a bit of knowledge about rendering. I learned quite a bit just from watching Handmade Hero, where Casey writes a software renderer from scratch, then implements a nearly identical renderer with OpenGL. The more I learn about rendering, the better this technique works.

Before writing this post I spent some time experimenting with using a media player as a interface to a game. For example, rather than render the game using OpenGL or similar, render it as PPM frames and send it to the media player to be displayed, just as game consoles drive television sets. Unfortunately the latency is horrible — multiple seconds — so that idea just doesn’t work. So while this technique is fast enough for real time rendering, it’s no good for interaction.