Update: I solved another game using essentially the same technique.

British Square is a 1978 abstract strategy board game which I recently discovered from a YouTube video. It’s well-suited to play by pencil-and-paper, so my wife and I played a few rounds to try it out. Curious about strategies, I searched online for analysis and found nothing whatsoever, meaning I’d have to discover strategies for myself. This is exactly the sort of problem that nerd snipes, and so I sunk a couple of evenings building an analysis engine in C — enough to fully solve the game and play perfectly. 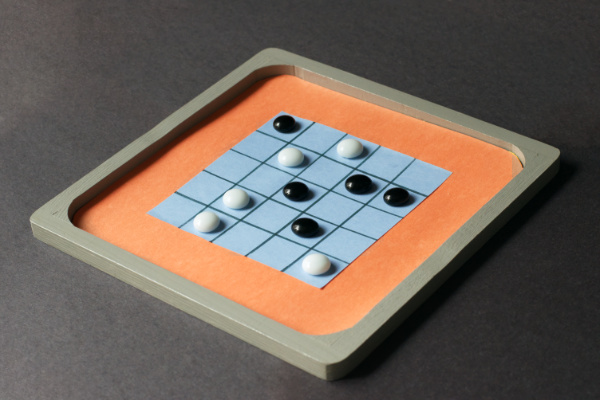 The game is played on a 5-by-5 grid with two players taking turns placing pieces of their color. Pieces may not be placed on tiles 4-adjacent to an opposing piece, and as a special rule, the first player may not play the center tile on the first turn. Players pass when they have no legal moves, and the game ends when both players pass. The score is the difference between the piece counts for each player.

In the default configuration, my engine takes a few seconds to explore the full game tree, then presents the minimax values for the current game state along with the list of perfect moves. The UI allows manually exploring down the game tree. It’s intended for analysis, but there’s enough UI present to “play” against the AI should you so wish. For some of my analysis I made small modifications to the program to print or count game states matching certain conditions.

Most importantly: The first player can always win by two points. In other words, it’s not like Tic-Tac-Toe where perfect play by both players results in a tie. Due to the two-point margin, the first player also has more room for mistakes and usually wins even without perfect play. There are fewer opportunities to blunder, and a single blunder usually results in a lower win score. The second player has a narrow lane of perfect play, making it easy to blunder.

The special center rule probably exists to reduce the first player’s obvious advantage, but in practice it makes little difference. Without the rule, the first player has an additional (fifth) branch for a win by two points:

Improved alternative special rule: Bias the score by two in favor of the second player. This fully eliminates the first player’s advantage, perfect play by both sides results in a tie, and both players have a narrow lane of perfect play.

One of my goals was to develop a heuristic so that even human players can play perfectly from memory, as in Tic-Tac-Toe. Unfortunately I was not able to develop any such heuristic, though I was able to prove that a greedy heuristic — always claim as much territory as possible — is often incorrect and, in some cases, leads to blunders.

As I’ve done before, my engine represents the game using bitboards. Each player has a 25-bit bitboard representing their pieces. To make move validation more efficient, it also sometimes tracks a “mask” bitboard where invalid moves have been masked. Updating all bitboards is cheap (place(), mask()), as is validating moves against the mask (valid()).

The longest possible game is 32 moves. This would just fit in 5 bits, except that I needed a special “invalid” turn, making it a total of 33 bits. So I use 6 bits to store the turn counter.

Besides generally being unnecessary, the validation masks can be derived from the main bitboards, so I don’t need to store them in the game tree. That means I need 25 bits per player, and 6 bits for the counter: 56 bits total. I pack these into a 64-bit integer. The first player’s bitboard goes in the bottom 25 bits, the second player in the next 25 bits, and the turn counter in the topmost 6 bits. The turn counter starts at 1, so an all zero state is invalid. I exploit this in the hash table so that zeroed slots are empty (more on this later).

Since the state is so small, rather than passing a pointer to a state to be acted upon, bitboard functions return a new bitboard with the requested changes… functional style.

The engine uses minimax to propagate information up the tree. Since the search extends to the very bottom of the tree, the minimax “heuristic” evaluation function is the actual score, not an approximation, which is why it’s able to play perfectly.

When I’ve used minimax before, I built an actual tree data structure in memory, linking states by pointer / reference. In this engine there is no such linkage, and instead the links are computed dynamically via the validation masks. Storing the pointers is more expensive than computing their equivalents on the fly, so I don’t store them. Therefore my game tree only requires 56 bits per node — or 64 bits in practice since I’m using a 64-bit integer. With only 8,659,987 nodes to store, that’s a mere 66MiB of memory! This analysis could have easily been done on commodity hardware two decades ago.

What about the minimax values? Game scores range from -10 to 11: 22 distinct values. (That the first player can score up to 11 and the second player at most 10 is another advantage to going first.) That’s 5 bits of information. However, I didn’t have this information up front, and so I assumed a range from -25 to 25, which requires 6 bits.

There are still 8 spare bits left in the 64-bit integer, so I use 6 of them for the minimax score. Rather than worry about two’s complement, I bias the score to eliminate negative values before storing it. So the minimax score rides along for free above the state bits.

The vast majority of game tree branches are redundant. Even without taking symmetries into account, nearly all states are reachable from multiple branches. Exploring all these redundant branches would take centuries. If I run into a state I’ve seen before, I don’t want to recompute it.

Once I’ve computed a result, I store it in a hash table so that I can find it later. Since the state is just a 64-bit integer, I use an integer hash function to compute a starting index from which to linearly probe an open addressing hash table. The entire hash table implementation is literally a dozen lines of code:

If the bitboard is not found, it returns a pointer to the (zero-valued) slot where it should go so that the caller can fill it in.

Memoization eliminates nearly all redundancy, but there’s still a major optimization left. Many states are equivalent by symmetry or reflection. Taking that into account, about 7/8th of the remaining work can still be eliminated.

Multiple different states that are identical by symmetry must to be somehow “folded” into a single, canonical state to represent them all. I do this by visiting all 8 rotations and reflections and choosing the one with the smallest 64-bit integer representation.

I only need two operations to visit all 8 symmetries, and I chose transpose (flip around the diagonal) and vertical flip. Alternating between these operations visits each symmetry. Since they’re bitboards, transforms can be implemented using fancy bit-twiddling hacks. Chess boards, with their power-of-two dimensions, have useful properties which these British Square boards lack, so this is the best I could come up with:

These transform both players’ bitboards in parallel while leaving the turn counter intact. The logic here is quite simple: Shift the bitboard a little bit at a time while using a mask to deposit bits in their new home once they’re lined up. It’s like a coin sorter. Vertical flip is analogous to byte-swapping, though with 5-bit “bytes”.

Callers need only use canonicalize() on values they pass to lookup() or store in the table (via the returned pointer).

If you can come up with a perfect play heuristic, especially one that can be reasonably performed by humans, I’d like to hear it. My engine has a built-in heuristic tester, so I can test it against perfect play at all possible game positions to check that it actually works. It’s currently programmed to test the greedy heuristic and print out the millions of cases where it fails. Even a heuristic that fails in only a small number of cases would be pretty reasonable.