My take on "where's all the code"

This article was discussed on Lobsters.

Earlier this month Ted Unangst researched compiling the OpenBSD kernel 50% faster, which involved stubbing out the largest, extraneous branches of the source tree. To find the lowest-hanging fruit, he wrote a tool called watc — where’s all the code — that displays an interactive “usage” summary of a source tree oriented around line count. A followup post about exploring the tree in parallel got me thinking about the problem, especially since I had just written about a concurrent queue. Turning it over in my mind, I saw opportunities for interesting data structures and memory management, and so I wanted to write my own version of the tool, watc.c, which is the subject of this article.

The original watc is interactive and written in idiomatic Go. My version is non-interactive, written in C, and currently only supports Windows. Not only do I prefer batch programs generally, building an interactive user interface would be complicated and distract from the actual problem I wanted to tackle. As for the platform restriction, it has some convenient constraints (for implementers), and my projects are often about shooting multiple birds with one stone:

Running my tool on nearly the same source tree as the original example yields:

In place of interactivity it has -n (lines) and -d (depth) switches to control tree pruning, where branches are summarized as (other) entries. My idea is for users to run the tool repeatedly with different cutoffs and filters to get a feel for where’s all the code. (It could really use more such knobs.) Repeated counting makes performance all the more important. On my machine, and a hot cache, the above takes ~180ms to count those 6.89 million lines of code across 8,607 source files.

Each directory is treated like one big source file of its recursively concatenated contents, so the tool only needs to track directories. Each directory entry comprises a variable-length string name, line and byte totals, and tree linkage such that it can be later navigated for sorting and printing. That linkage has a clever solution, which I’ll get to later. First, lets deal with strings.

It’s important to get out of the null-terminated string business early, only reverting to their use at system boundaries, such as constructing paths for the operating system. Better to handle strings as offset/length pairs into a buffer. Definitely avoid silly things like allocating many individual strings, as encouraged by strdup — and most other programming language idioms — and certainly avoid useless functions like strcpy.

When the operating system provides a path component that I need to track for later, I intern it into a single, large buffer. That buffer looks like so:

Empirically I determined that even large source trees cumulatively total on the order of 10,000 characters of directory names. The OpenBSD kernel source tree is only 2,992 characters of names.

The biggest I found was the LLVM source tree at 121,720 characters, not only because of its sheer volume but also because it has generally has relatively long names. So for my maximum buffer size I just maxed it out (explained in a moment) and called it good. Even with UTF-16, that’s only 8MiB which is perfectly reasonable to allocate all at once up front. Since my string handles don’t contain pointers, this buffer could be freely relocated in the case of realloc.

The operating system provides a null-terminated string. The buffer makes a copy and returns a handle. A handle is a 32-bit integer encoding offset and length.

The negative range is reserved for errors, leaving 31 bits. I allocate 9 to the length — enough for MAX_PATH of 260 — and the remaining 22 bits for the buffer offset, exactly matching the range of my BUF_MAX. Splitting on a nibble boundary would have displayed more nicely in hexadecimal during debugging, but oh well.

A couple of helper functions are in order:

Rather than allocate the string buffer on the heap, it’s a static (read: too big for the stack) scoped to main. I consistently call it b.

That’s string management solved efficiently in a dozen lines of code. I briefly considered a hash table to de-duplicate strings in the buffer, but real source trees aren’t redundant enough to make up for the hash table itself, plus there’s no reason here to make that sort of time/memory trade-off.

I settled on 24-byte directory entries:

For nbytes I teetered between 32 bits and 64 bits for the byte count. No source tree I found overflows an unsigned 32-bit integer, but LLVM comes close, just barely overflowing a signed 31-bit integer as of this year. Since I wanted 10x over the worst case I could find, that left me with a 64-bit integer for bytes.

For nlines, 32 bits has plenty of overhead. More importantly, this field is updated concurrently and atomically by multiple threads — line counting is parallelized — and I want this program to work on 32-bit hosts limited to 32-bit atomics.

The name is the string handle for that directory’s name.

The link and nsubdirs is the tree linkage. The link field is an index, and serves two different purposes at different times. Initially it will identify the directory’s parent directory, and I had originally named it parent. nsubdirs is the number of subdirectories, but there is initially no link to a directory’s children.

Like with the buffer, I pre-allocate all the directory entries I’ll need:

A directory handle is just an index into dirs. The link field is one such handle. Like string handles, directory entries contain no pointers, and so this dirs buffer could be freely relocated, a la realloc, if the context called for such flexibility. In my program, rather than allocate this on the heap, it’s just a static (read: too big for the stack) scoped to main.

For DIRS_MAX, I again looked at the worst case I could find, LLVM, which requires 12,163 entries. I had hoped for 16-bit directory handles, but that would limit source trees to 32,768 directories — not quite 10x over the worst case. I settled on 131,072 entries: 3MiB. At only 11MiB total so far, in the very worst case, it hardly matters that I couldn’t shave off these extra few bytes.

Mentally bookmark that “process file” part. It will be addressed later.

The buildpath function walks the link fields, copying (memcpy) path components from the string buffer into the path, separated by backslashes.

At the top-level the program must first traverse a tree. There are two strategies for traversing a tree (or any graph):

Recursion makes me nervous, but besides this, a queue is already a natural fit for this problem. The tree I build in dirs is also the breadth-first processing queue. (Note: This is entirely distinct from the message queue that I’ll introduce later, and is not a concurrent queue.) Further, building the tree in dirs via breadth-first traversal will have useful properties later.

The queue is initialized with the root directory, then iterated over until the iterator reaches the end. Additional directories may added during iteration, per the last section.

When the loop exits, the program has traversed the full tree. Counts are now propagated up the tree using the link field, pointing from leaves to root. In this direction it’s just a linked list. Propagation starts at the root and works towards leaves to avoid multiple-counting, and the breadth-first dirs is already ordered for this.

Since this is really another traversal, this could be done during the first traversal. However, line counting will be done concurrently, and it’s easier, and probably more efficient, to propagate concurrent results after the concurrent part of the code is complete.

Printing the graph will require a depth-first traversal. Given an entry, the program will iterate over its children. However, the tree links are currently backwards, pointing from child to parent: 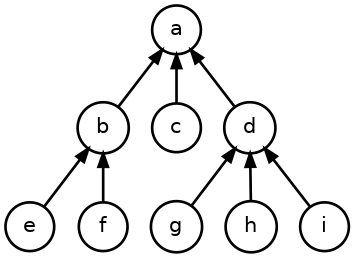 To traverse from root to leaves, those links will need to be inverted: 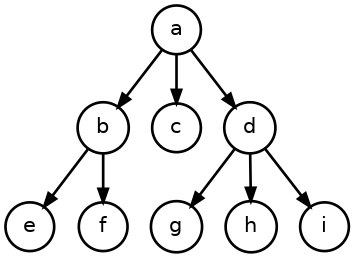 However, there’s only one link on each node, but potentially multiple children. The breadth-first traversal comes to the rescue: All child nodes for a given directory are adjacent in dirs. If link points to the first child, finding the rest is trivial. There’s an implicit link between siblings by virtue of position: 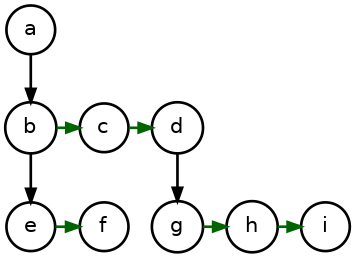 The tree is now restructured for sorting and depth-first traversal.

I won’t include it here, but I have a qsort-compatible comparison function, dircmp that compares by line count descending, then by name ascending. As a file system tree, siblings cannot have equal names.

Since child entries are adjacent, it’s a trivial to qsort each entry’s children. A loop sorts the whole tree:

We’re almost to the finish line.

As I said, recursion makes me nervous, so I took the slightly more complicated route of an explicit stack. Path components must be separated by a backslash delimiter, so the deepest possible stack is MAX_PATH/2. Each stack element tracks a directory handle (d) and a subdirectory index (i).

I have a printstat to output an entry. It takes an entry, the string buffer, and a depth for indentation level.

Here’s a simplified depth-first traversal calling printstat. (The real one has to make decisions about when to stop and summarize, and it’s dominated by edge cases.) I initialize the stack with the root directory, then loop until it’s empty.

At this point the “process file” part of traversal was a straightforward CreateFile, ReadFile loop, CloseHandle. I suspected it spent most of its time in the loop counting newlines since I didn’t do anything special, like SIMD, aside from not over-constraining code generation.

However after taking some measurements, I found the program was spending 99.9% its time waiting on Win32 functions. CreateFile was the most expensive at nearly 50% of the total run time, and even CloseHandle was a substantial blocker. These two alone meant overlapped I/O wouldn’t help much, and threads were necessary to run these Win32 blockers concurrently. Counting newlines, even over gigabytes of data, was practically free, and so required no further attention.

So I set up my lock-free work queue.

As before, q here is the atomic. A max-size queue for QUEUE_LEN worked best in my tests. Larger queues were rarely full. Or empty, except at startup and shutdown. Queue elements are a pair of directory handle (d) and file string handle (f), stored in separate arrays.

I didn’t need to push the file name strings into the string buffer before, but now it’s a great way to supply strings to other threads. I push the string into the buffer, then send the handle through the queue. The recipient re-constructs the path on its end using the directory tree and this file name. Unfortunately this puts more stress on the string buffer, which is why I had to max out the size, but it’s worth it.

If queue_send() returns false then the queue is full, so it processes the job itself. There might be room later for the next file.

Worker threads look similar, spinning until an item arrives in the queue:

This was a substantial performance boost. At least on my system, running just 4 threads total is enough to saturate the Win32 interface, and additional threads do not make the program faster despite more available cores.

Aside from overall portability, I’m quite happy with the results.