Four years ago I investigated the idea of using browsers as nodes for distributed computing. I concluded that due to the platform’s constraints there were few problems that it was suited to solve. However, the situation has since changed quite a bit! In fact, this weekend I made practical use of web browsers across a number of geographically separated computers to solve a computational problem.

Web workers came into existence, not just as a specification but as an implementation across all the major browsers. It allows for JavaScript to be run in an isolated, dedicated background thread. This eliminates the setTimeout() requirement from before, which not only caused a performance penalty but really hampered running any sort of lively interface alongside the computation. The interface and computation were competing for time on the same thread.

The worker isn’t entirely isolated; otherwise it would be useless for anything but wasting resources. As pubsub events, it can pass structured clones to and from the main thread running in the page. Other than this, it has no access to the DOM or other data on the page.

The interface is a bit unfriendly to live development, but it’s manageable. It’s invoked by passing the URL of a script to the constructor. This script is the code that runs in the dedicated thread.

The sort of interface that would have been more convenient for live interaction would be something like what is found on most multi-threaded platforms: a thread constructor that accepts a function as an argument.

I completely understand why this isn’t the case. The worker thread needs to be totally isolated and the above example is insufficient. I’m passing a closure to the constructor, which means I would be sharing bindings, and therefore data, with the worker thread. This interface could be faked using a data URI and taking advantage of the fact that most browsers return function source code from toString().

Another difficulty is libraries. Ignoring the stupid idea of passing code through the event API and evaling it, that single URL must contain *all* the source code the worker will use as one script. This means if you want to use any libraries you'll need to concatenate them with your script. That complicates things slightly, but I imagine many people will be minifying their worker JavaScript anyway.

Libraries can be loaded by the worker with the importScripts() function, so not everything needs to be packed into one script. Furthermore, workers can make HTTP requests with XMLHttpRequest, so that data don’t need to be embedded either. Note that it’s probably worth making these requests synchronously (third argument false), because blocking isn’t an issue in workers.

The other big change was the effect Google Chrome, especially its V8 JavaScript engine, had on the browser market. Browser JavaScript is probably about two orders of magnitude faster than it was when I wrote my previous post. It’s incredible what the V8 team has accomplished. If written carefully, V8 JavaScript performance can beat out most other languages.

Finally, I also now have much, much better knowledge of JavaScript than I did four years ago. I’m not fumbling around like I was before.

When I’m developing, I use both a laptop and a desktop simultaneously, and I really wanted to put them both to work searching that huge space for good solutions. Initially I was going to accomplish this by writing my program in Clojure and running it on each machine. But what about involving my wife’s computer, too? I wasn’t going to bother her with setting up an environment to run my stuff. Writing it in JavaScript as a web application would be the way to go. To coordinate this work I’d use simple-httpd. And so it was born,

Here’s what it looks like in action. Each tab open consumes one CPU core, allowing users to control their commitment by choosing how many tabs to keep open. All of those numbers update about twice per second, so users can get a concrete idea of what’s going on. I think it’s fun to watch. 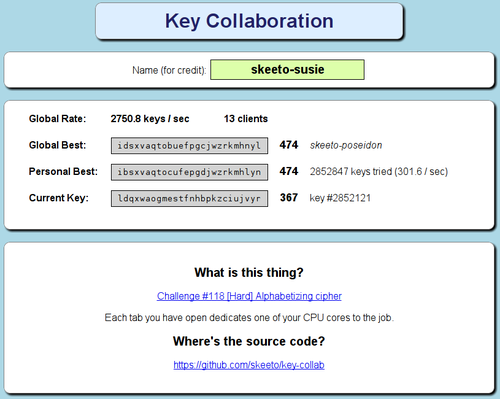 (I’m obviously a fan of blues and greens on my web pages. I don’t know why.)

I posted the server’s URL on reddit in the challenge thread, so various reddit users from around the world joined in on the computation.

I had an accidental discovery with strict mode and Chrome. I’ve always figured using strict mode had an effect on the performance of code, but had no idea how much. From the beginning, I had intended to use it in my worker script. Being isolated already, there are absolutely no downsides.

However, while I was developing and experimenting I accidentally turned it off and left it off. It was left turned off for a short time in the version I distributed to the clients, so I got to see how things were going without it. When I noticed the mistake and uncommented the "use strict" line, I saw a 6-fold speed boost in Chrome. Wow! Just making those few promises to Chrome allowed it to make some massive performance optimizations.

With Chrome moving at full speed, it was able to inspect 560 keys per second on Brian’s laptop. I was getting about 300 keys per second on my own (less-capable) computers. I haven’t been able to get anything close to these speeds in any other language/platform (but I didn’t try in C yet).

Furthermore, I got a noticeable speed boost in Chrome by using proper object oriented programming, versus a loose collection of functions and ad-hoc structures. I think it’s because it made me construct my data structures consistently, allowing V8’s hidden classes to work their magic. It also probably helped the compiler predict type information. I’ll need to investigate this further.

Use strict mode whenever possible, folks!

What made this problem work?

Having web workers available was a big help. However, this problem met the original constraints fairly well.

This project was a lot of fun so I hope I get another opportunity to do it again in the future, hopefully with a lot more nodes participating.