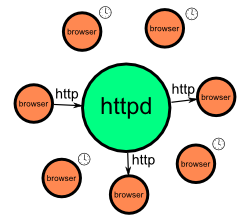 I'm not the first to come across this idea: the browser could be used as part of a distributed computing system. A web server hands out JavaScript and the browser runs the script and reports the results back to the server. The browser is a portable, widely available platform so just about anyone can easily contribute, possibly without even knowing.

Browsers aren't really expecting this sort of thing. They will complain if a script is running for too long. If you tell Firefox to continue running the script anyway, it will lock up until the script is done (or when it complains again). This can be worked around by writing a simple scheduler with setTimeout().

This could also potentially be used as an alternative to advertising. Instead of selling advertising space, a website operator could sell visitor's CPU time by including a little snippet of code. This may be more successful, because most visitors would be unaware of it, making it less intrusive. It will be less likely to be blocked. Of course, there ethical issues about this. In fact, there is already a company doing this with secret Java applets.

There are two serious constraints on using JavaScript in a browser as a distributed computing platform:

Low bandwidth. There isn't a lot of opportunity to transfer data between the server and the node, and nodes can't talk to each other. The data needed by a node must be small. The results data must also be small.

Short computational units. The JavaScript in the browser has no way to store its running state between browser sessions, so it must rely on the server for this. This means that the units of work must be able to be completed within a short period of time. A few minutes at the most on a normal computer.

So even though the largest known Mersenne prime has nearly 13 million digits (about 5 MB just to store the entire number), it can be described by it's exponent, 43,112,609, which is small enough to fit in a 4-byte integer. The result of a calculation, a probabilistic primality test, is a "yes" or "no". One bit. It fits the first constraint very well.

However, the smallest amount of work a node can do is an entire primality test. If we break it down any further, the prime will have been expanded and we will not fit the first constraint. There will be too much data. To see how possible it might be, I implemented it, which you can try out here,

I modified an existing JavaScript bigint library which allowed me to get it up running quickly. After you receive the page, your browser will run the Miller-Rabin primality test on 2^9941 - 1. You can edit the source HTML to try a different exponent. Running it on several of my computers on different browsers it took anywhere from an hour to 8 hours. And that's only with an exponent of 9941. It's an unsuitable problem.

It would be neat to see a browser computing grid in action, but I can't think of a problem to solve with it.