As I mentioned previously, I participated in this year’s Seven Day Roguelike. It was my first time doing so. I managed to complete my roguelike within the allotted time period, though lacking many features I had originally planned. It’s an HTML5 game run entirely within the browser. You can play the final version here, 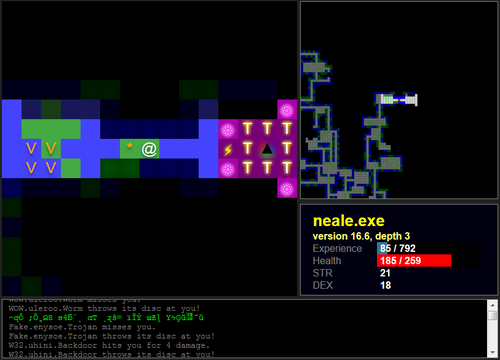 The first thing I did was create a functioning graphical display. The goal was to get it into a playable state as soon as possible so that I could try ideas out as I implemented them. This was especially true because I was doing live development, adding features to the game as it was running.

The display is made up of 225 (15x15) absolutely positioned div elements. The content of each div is determined by its dynamically-set CSS classes. Generally, the type of map tile is one class (background) and the type of monster in that tile is another class (foreground). If the game had items, these would also be displayed using classes.

While I could use background-image to fill these divs with images, I decided when I started I would use no images whatsoever. Everything in the game would be drawn using CSS.

After the display was working, I was able spend the rest of the time working entirely in game coordinates, completely forgetting all about screen coordinates. This made everything else so much simpler.

Early in the week I got my save system working. After ditching a library that wasn’t working, it only took me about 45 minutes to do this from scratch. Plugging my main data structure into it just worked. I did end up accidentally violating my assumption about non-circularity. When adding multiple dungeon levels, these levels would refer to each other, leading to circularity. I got around that with a small hack of referring to other dungeons by name, an indirect reference.

From what I’ve seen of other HTML5 roguelikes, saving state seems to be a unique feature of my roguelike. I don’t see anyone else doing it.

I think the final combat mechanics are fairly interesting. It’s all based on identity discs and corruption (see the help in the game for more information). There are two kinds of attacks that any creature in the game can do: melee (bash with your disc) and ranged (throw your disc). I created three different AIs to make use of these, bringing in four different monster classes. Note, I consider these game spoilers.

The eight final, identical bosses of the game have a slightly custom AI, making them sort of like another class on their own. They’re the “T” monsters in the screenshot above. I won’t describe it here because I still want there to be some sort of secret. :-)

Corruption was actually something I came up with late in the week, and I’m happy with out it turned out. It makes for more interesting combat tactics (see above) and I think it really adds some flavor. Occasionally when you move over corrupted (green) tiles, you will notice the game’s interface being scrambled for a turn.

I ended up using rot.js to handle field-of-view calculations, path finding, and dungeon generation. These are all time consuming to write and there really is no reason to implement your own for the first two. I would have liked to do my own dungeon generation, but rot.js was just so convenient for this that I decided to skip it. The downside is that my dungeons will look like the dungeons from other games.

Path finding was critical not only for monsters but also automatic exploration. Even though it’s quirky, I’m really happy with how it turned out. Personally, one of the most tiring parts of some roguelikes is just manually navigating around empty complex corridors. Good gameplay is all about a long series of interesting decisions. Choosing right or left when exploring a map is generally not an interesting decision, because there’s really no differentiating them. Auto-exploration is a useful way to quickly get the player to the next interesting decision. In my game, you generally only need to press a directional navigation key when you’re engaged in combat.

I’m really happy with how my overlay screens turned out, especially the keyboard styling. I’m talking about the help screen, control screen, and end-game screen. Since this is the very first thing presented to the user, I felt it was important to invest time into it. First impressions are everything.

The game is smaller than I originally planned. Monsters have unused stats and slots on them not displayed by the interface. A look at the code will reveal a lot of openings I left for functionality not actually present. I originally intended for 10 dungeon levels, but lacking a variety of monster AIs, which are time consuming to write, I ended up with 6 dungeon levels.

My original healing mechanic was going to be health potions (under a different, thematic name), with no heal-over-time. As I was nearing the end of the week I still hadn’t implemented items, so this got scrapped for a heal-on-level mechanic and an easing of the leveling curve. Everything was in place for implementing items, and therefore healing potions, except for the user interface. This was a common situation: the UI being the hardest part of any new feature. Writing an inventory management interface was going to take too much time, so I dropped it.

Also dumped due to the lack of time to implement an interface for it was some kind of spell mechanic. Towards the end I did squeeze in ranged attacks, but this was out of necessity of real combat mechanics.

There are no stores/merchants because these are probably the hardest to implement interfaces of all!

I’m also not entirely satisfied with the balance. The early game is too easy and the late game is probably too hard. The difficulty ramps up quickly in the middle. Fortunately this is probably better than the reverse: the early game is too hard and the end game is too easy. Early difficulty won’t be what’s scaring off anyone trying out the game — instead, that would be boredom! Generally if you find a level too difficult, you need to retreat to the previous level and grind out a few more levels. This turns out to be not very interesting, so there needs to be less of it.

Fixing this would take a lot more play-testing — also very time-consuming. At the end of the week I probably spent around six hours just playing legitimately (i.e. not cheating), and having fun doing so, but that still wasn’t enough. The very end of the game with the final bosses is quite challenging, so to test that part in a reasonable time-frame I had to cheat a bit.

My namespaces are messy. This was the largest freestanding (i.e. not AngularJS) JavaScript application I’ve done so far, and it’s the first one where I could really start to appreciate tighter namespace management. This lead to more coupling between different systems than was strictly necessary.

I still want to avoid the classical module pattern of wrapping everything in a big closure. That’s incompatible with Skewer for one, and it would have also been incompatible with my prototype-preserving storage system. I just need to be more disciplined in containing sprawl.

However, in the end none of this really mattered one bit. No one is maintaining this code and no one will ever read it except me. At the end of the week it’s much better to have sloppy code and a working game than a clean codebase and only half of a game.

Along with my no-images philosophy, I was intending to exploit CSS animations to make the map look really interesting. I wanted the glowing walls to pulsate with energy. Unfortunately adding a removing classes causes these animations to reset if reflow is allowed to occur — sometimes. The exact behavior is browser-dependent. All the individual tile animations would get out of sync and everything would look terrible. There is intentionally little control over this behavior, for optimization purposes, so I couldn’t fix it.

Will I participate again next year? Maybe. I’m really happy with the outcome this year, but I’m afraid doing the same thing again next year will feel tedious. But maybe I’ll change my mind after taking a year off from this! I wasn’t intending on participating this year, until Brian twisted my arm into it. See, peer pressure isn’t always a bad thing!