A couple of weeks ago I wrote a library to measure the retained memory footprint of arbitrary Elisp objects for the purposes of optimization. It’s called Caliper.

Note, Caliper requires predd, my predicate dispatch library. Neither of these packages are on MELPA or Marmalade since they’re mostly for fun.

The reason I wanted this was that I came across a post on reddit where someone had scraped 217,000 Jeopardy! questions from J! Archive and dumped them out into a single, large JSON file. The significance of the effort is that it dealt with some of the inconsistencies of J! Archive’s data presentation, normalizing them for the JSON output.

When I want to examine a JSON dataset like this I have three preferred options:

Here, jeopardy is bound to a vector of 216,930 association lists (alists). I’m curious exactly how much heap memory this data structure is using. To find out, we need to walk the data structure and sum the sizes of everything we come across. However, care must be taken not to count the identical objects twice, such as symbols, which, being interned, appear many times in this data.

This is lisp so let’s start with the cons cell. A cons cell is just a pair of pointers, called car and cdr.

These are used to assemble lists. 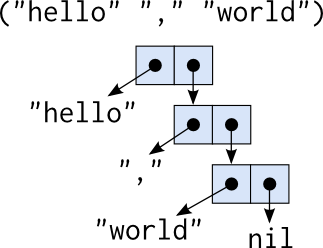 So a cons cell itself — the shallow size — is two words: 16 bytes on a 64-bit operating system. To make sure Elisp doesn’t happen to have any additional information attached to cons cells, let’s take a look at the Emacs source code.

The return value from garbage-collect backs this up. The first value after each type is the shallow size of that type. From here on, all values have been computed for 64-bit Emacs running on x86-64 GNU/Linux.

Integers are a special case. Elisp uses what is called tagged integers. They’re not heap-allocated objects. Instead they’re embedded inside the object pointers. That is, those Lisp_Object pointers in Lisp_Cons will hold integers directly. This means to Caliper integers have retained size of 0. We can use this to verify Caliper’s return value for cons cells.

Tagged integers are fast and save on memory. They also compare properly with eq, which is just a pointer (identity) comparison. However, because a few bits need to be reserved for differentiating them from actual pointers these integers have a restricted dynamic range.

Floats are not tagged and exist as immutable objects in the heap. That’s why eql is still useful in Elisp — it’s like eq but will handle numbers properly. (By convention you should use eql for integers, too.)

Not counting the string’s contents, a string’s base size is 32 bytes according to garbage-collect. The length of the string can’t be used here because that counts characters, which vary in size. There’s a string-bytes function for this. A string’s size is 32 plus its string-bytes value.

As you can see from above, symbols are huge. Without even counting either the string holding the name of the symbol or the symbol’s plist, a symbol is 48 bytes.

This 1,038 bytes is a little misleading. The symbol itself is 48 bytes, the string "hello" is 37 bytes, and the plist is nil. The retained size of nil is significant. On my system, nil’s plist has 4 key-value pairs, which themselves have retained sizes. When examining symbols, caliper doesn’t care if they’re interned or not, including symbols like nil and t. However, nil is only counted once, so it will have little impact on a large data structure.

Outside of vectors, measuring object sizes starts to get fuzzy. For example, it’s not possible to examine the exact internals of a hash table from Elisp. We can see its contents and the number of elements it can hold without re-sizing, but there’s intermediate structure that’s not visible. Caliper makes rough estimates for each of these types.

To avoid double counting objects, a hash table with a test of eq is dynamically bound by the top level call. It’s used like a set. Before an object is examined, the hash table is checked. If the object is listed, the reported size is 0 (it consumes no additional space than already accounted for).

This automatically solves the circularity problem. There’s no way we can traverse into the same data structure a second time because we’ll stop when we see it twice.

So what’s the total retained size of the jeopardy structure? About 124MB.

For fun, let’s see if how much we can improve on this.

json.el will return alists for objects by default, but this can be changed by setting json-object-type to something else. Initially I thought maybe using plists instead would save space, but I later realized that plists use exactly the same number of cons cells as alists. If this doesn’t sound right, try to picture the cons cells in your head (an exercise for the reader).

Strangely this is 121 bytes smaller. I don’t know why yet, but in the scope of 124MB that’s nothing.

They’re (now) plists of 7 pairs. All of the keys are symbols, and, as such, are interned and consuming very little memory. All of the values are strings. Surely we can do better here. The strings can be interned and the numbers can be turned into tagged integers. The :category values would probably be good candidates for conversion into symbols.

Here’s an interesting fact about Jeopardy! that can be exploited for our purposes. While Jeopardy! covers a broad range of trivia, it does so very shallowly. The same answers appear many times. For example, the very first answer from our dataset, Copernicus, appears 14 times. That makes even the answers good candidates for interning.

A string pool is trivial to implement. Just use a weak, equal hash table to track strings. Making it weak keeps it from leaking memory by holding onto strings for longer than necessary.

So how are we looking now?

That’s down to 79MB of memory. Not bad! If we print-circle this, taking advantage of string interning in the printed representation, I wonder how it compares to the original JSON.