Last year I participated in 7DRL 2013 and submitted a game called Disc RL. 7DRL stands for Seven Day Roguelike — a challenge to write a roguelike game inside of one week. I participated again this year in 7DRL 2014, with the help of Brian. My submission was called Northbound. To play, all you need is a modern web browser.

It only takes about 10-15 minutes to complete. 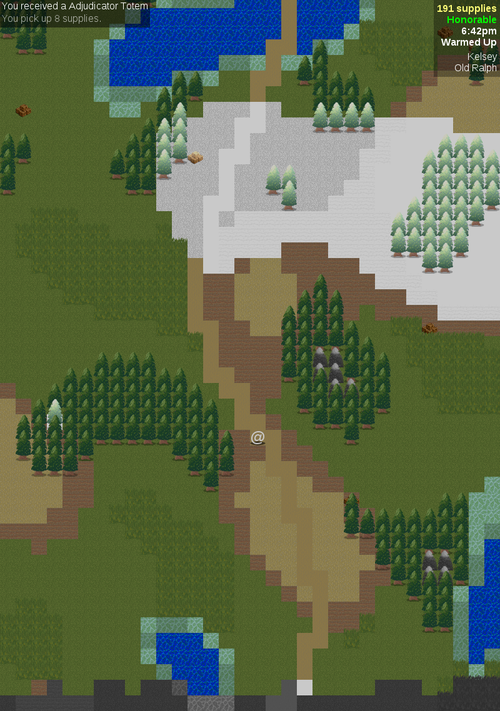 It’s a story-driven survival game about escaping northward away from a mysterious, spreading corruption. (“Corruption” seems to be a common theme in my games.) There’s no combat and, instead, the game is a series of events with a number of possible responses by the player. For better or worse, other characters may join you in your journey. I coded the core game basically from scratch — no rot.js this year — and Brian focused on writing story events and expanding the story system.

Just as Disc RL was inspired primarily by NetHack and DCSS, this year’s submission was heavily, to an embarrassing extent, inspired by two other games: The Banner Saga (LP) and One Way Heroics (LP).

Writing events was taking a lot longer than expected, and time ran short at the end of the week, so there aren’t quite as many events as I had hoped. This leaves the story incomplete, so don’t keep playing over and over trying to reveal it all!

My ultimate goal was to create a game with an interesting atmosphere, and I think I was mostly successful. There’s somber music, sounds effects, and ambient winds. The climate changes as you head north, with varying terrain. There’s day and night cycles. I intentionally designed the main menu to show off most of this.

Events are stored in a handful of YAML files. YAML is a very human-friendly data format that, unlike JSON, is very well suited for writing prose. Here’s an example of an event that may occur if you walk on a frozen lake with too many people.

Those paragraphs would be difficult to edit and format while within quotes in JSON.

Events can manipulate game state, with other events depending on the state change, effectively advancing story events in order. The longest event chain in the game reveals some of the nature of the corruption. This gets complicated fast, which really slows down event development.

If this is interesting for you to play with, you should easily be able to add your own story events to the game just by appending to the event YAML files.

I put off map generation for awhile to work on the story system. For the first few days it was just randomly placed trees on an endless grassy field.

When I finally moved on to map generated it was far easier than I expected. It’s just a few layers of the same 3D Perlin noise, capable of providing a virtually infinite, seamless expanse of terrain. Water-dirt-grass is one layer. Trees-mountains-highgrass is another layer. The cold/snow is a third layer, which, in addition to Perlin noise, is a function of altitude (more snow appears as you go north).

One obvious early problem was blockage. Occasionally forests would generate that prohibited movement forward, ending the game. Rather than deal with the complexities of checking connectedness, I went with an idea suggested by Brian: add a road that carves its way up the map, guaranteeing correctness. It plows through forests, mountains, and lakes alike all the way to the end of the game. Its curvature is determined by yet another sample into the same 3D Perlin set.

The snow and corruption effects are all dynamically generated from the base tiles. In short, I write the tile onto a hidden canvas, add a white gradient for snow, and desaturate for corruption. This was faster than manually creating three versions of everything.

While I really like the look and sound of Northbound, it’s ultimately less fun for me than Disc RL. With the fixed story and lack of procedually-genertaed content, it has little replayability. This would still be the case even if the story was fully fleshed out.

Even now I still play Disc RL on occasion, about a couple of times per month, just for enjoyment. Despite this, I’ve still never beaten it, which is an indication that I made it much too hard. On the other hand, Northbound is way too easy. The main problem is that running out of the supplies almost immediately ends the game in a not-fun way, so I never really want that to happen. The only way to lose is through intention.

Next year I need to make a game that looks and feels like Northbound but plays like Disc RL.