Yesterday I completed my third entry to the annual Seven Day Roguelike (7DRL) challenge (previously: 2013 and 2014). This year’s entry is called Goblin-COM. 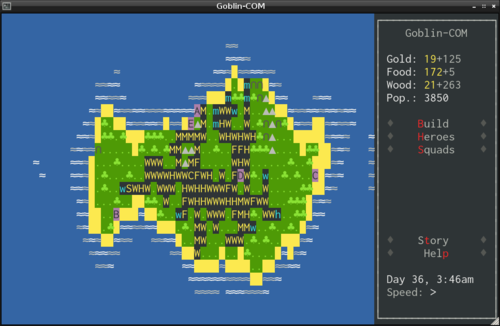 As with previous years, the ideas behind the game are not all that original. The goal was to be a fantasy version of classic X-COM with an ANSI terminal interface. You are the ruler of a fledgling human nation that is under attack by invading goblins. You hire heroes, operate squads, construct buildings, and manage resource income.

The inspiration this year came from watching BattleBunny play OpenXCOM, an open source clone of the original X-COM. It had its major 1.0 release last year. Like the early days of OpenTTD, it currently depends on the original game assets. But also like OpenTTD, it surpasses the original game in every way, so there’s no reason to bother running the original anymore. I’ve also recently been watching One F Jef play Silent Storm, which is another turn-based squad game with a similar combat simulation.

As in X-COM, the game is broken into two modes of play: the geoscape (strategic) and the battlescape (tactical). Unfortunately I ran out of time and didn’t get to the battlescape part, though I’d like to add it in the future. What’s left is a sort-of city-builder with some squad management. You can hire heroes and send them out in squads to eliminate goblins, but rather than dropping to the battlescape, battles always auto-resolve in your favor. Despite this, the game still has a story, a win state, and a lose state. I won’t say what they are, so you have to play it for yourself!

My previous entries were HTML5 games, but this entry is a plain old standalone application. C has been my preferred language for the past few months, so that’s what I used. Both UTF-8-capable ANSI terminals and the Windows console are supported, so it should be perfectly playable on any modern machine. Note, though, that some of the poorer-quality terminal emulators that you’ll find in your Linux distribution’s repositories (rxvt and its derivatives) are not Unicode-capable, which means they won’t work with G-COM.

I didn’t make use of ncurses, instead opting to write my own terminal graphics engine. That’s because I wanted a single, small binary that was easy to build, and I didn’t want to mess around with PDCurses. I’ve also been studying the Win32 API lately, so writing my own terminal platform layer would rather easy to do anyway.

I experimented with a number of terminal emulators — LXTerminal, Konsole, GNOME/MATE terminal, PuTTY, xterm, mintty, Terminator — but the least capable “terminal” by far is the Windows console, so it was the one to dictate the capabilities of the graphics engine. Some ANSI terminals are capable of 256 colors, bold, underline, and strikethrough fonts, but a highly portable API is basically limited to 16 colors (RGBCMYKW with two levels of intensity) for each of the foreground and background, and no other special text properties.

I put in partial support for Unicode because I wanted to use interesting characters in the game (≈, ♣, ∩, ▲). Windows has supported Unicode for a long time now, but since they added it too early, they’re locked into the outdated UTF-16. For me this wasn’t too bad, because few computers, Linux included, are equipped to render characters outside of the Basic Multilingual Plane anyway, so there’s no need to deal with surrogate pairs. This is especially true for the Windows console, which can only render a very small set of characters: another limit on my graphics engine. Internally individual codepoints are handled as uint16_t and strings are handled as UTF-8.

I said partial support because, in addition to the above, it has no support for combining characters, or any other situation where a codepoint takes up something other than one space in the terminal. This requires lookup tables and dealing with pitfalls, but since I get to control exactly which characters were going to be used I didn’t need any of that.

In spite of the limitations, I’m really happy with the graphical results. The waves are animated continuously, even while the game is paused, and it looks great. Here’s GNOME Terminal’s rendering, which I think looked the best by default.

I’ll talk about how G-COM actually communicates with the terminal in another article. The interface between the game and the graphics engine is really clean (device.h), so it would be an interesting project to write a back end that renders the game to a regular window, no terminal needed.

I came up with a format directive to help me colorize everything. It runs in addition to the standard printf directives. Here’s an example,

The color is specified by two characters, and the text it applies to is wrapped in curly brackets. There are eight colors to pick from: RGBCMYKW. That covers all the binary values for red, green, and blue. To specify an “intense” (bright) color, capitalize it. That means the Rk{...} above makes the wrapped text bright red.

And it mixes with the normal printf directives:

The GNU linker has a really nice feature for linking arbitrary binary data into your application. I used this to embed my assets into a single binary so that the user doesn’t need to worry about any sort of data directory or anything like that. Here’s what the make rule would look like:

The -r specifies that output should be relocatable — i.e. it can be fed back into the linker later when linking the final binary. The -b binary says that the input is just an opaque binary file (“plain” text included). The linker will create three symbols for each input file:

I used this to embed the story texts, and I’ve used it in the past to embed images and textures. If you were to link zlib, you could easily compress these assets, too. I’m surprised this sort of thing isn’t done more often!

To save time, and because it doesn’t really matter, saves are just memory dumps. I took another page from Handmade Hero and allocate everything in a single, contiguous block of memory. With one exception, there are no pointers, so the entire block is relocatable. When references are needed, it’s done via integers into the embedded arrays. This allows it to be cleanly reloaded in another process later. As a side effect, it also means there are no dynamic allocations (malloc()) while the game is running. Here’s roughly what it looks like.

The map pointer is that one exception, but that’s because it’s generated fresh after loading from the map_seed. Saving and loading is trivial (error checking omitted) and very fast.

The data isn’t important enough to bother with rename+fsync durability. I’ll risk the data if it makes savescumming that much harder!

The downside to this technique is that saves are generally not portable across architectures (particularly where endianness differs), and may not even portable between different platforms on the same architecture. I only needed to persist a single game state on the same machine, so this wouldn’t be a problem.

I’m definitely going to be reusing some of this code in future projects. The G-COM terminal graphics layer is nifty, and I already like it better than ncurses, whose API I’ve always thought was kind of ugly and old-fashioned. I like writing terminal applications.

Just like the last couple of years, the final game is a lot simpler than I had planned at the beginning of the week. Most things take longer to code than I initially expect. I’m still enjoying playing it, which is a really good sign. When I play, I’m having enough fun to deliberately delay the end of the game so that I can sprawl my nation out over the island and generate crazy income.