The end of the month marks Elfeed’s third birthday. Surprising to nobody, it’s also been three years of heavy, daily use by me. While I’ve used Elfeed concurrently on a number of different machines over this period, I’ve managed to keep an Elfeed database index with a lineage going all the way back to the initial development stages, before the announcement. It’s a large, organically-grown database that serves as a daily performance stress test. Hopefully this means I’m one of the first people to have trouble if an invisible threshold is ever exceeded.

I’m also the sort of person who gets excited when I come across an interesting dataset, and I have this gem sitting right in front of me. So a couple of days ago I pushed a new Elfeed function, elfeed-csv-export, which exports a database index into three CSV files. These are intended to serve as three tables in a SQL database, exposing the database to interesting relational queries and joins. Entry content (HTML, etc.) has always been considered volatile, so this is not exported. The export function isn’t interactive (yet?), so if you want to generate your own you’ll need to (require 'elfeed-csv) and evaluate it yourself.

All the source code for performing the analysis below on your own database can be found here:

The three exported tables are feeds, entries, and tags. Here are the corresponding columns (optional CSV header) for each:

And here’s the SQLite schema I’m using for these tables:

Web authors are notoriously awful at picking actually-unique entry IDs, even when using the smarter option, Atom. I still simply don’t trust that entry IDs are unique, so, as usual, I’ve qualified them by their source feed URL, hence the primary key on both columns in entries.

At this point I wish I had collected a lot more information. If I were to start fresh today, Elfeed’s database schema would not only fully match Atom’s schema, but also exceed it with additional logging:

I may start tracking some of these. If I don’t, I’ll be kicking myself three years from now when I look at this again.

A look at my index

So just how big is my index? It’s 25MB uncompressed, 2.5MB compressed. I currently follow 117 feeds, but my index includes 43,821 entries from 309 feeds. These entries are marked with 53,360 tags from a set of 35 unique tags. Some of these datapoints are the result of temporarily debugging Elfeed issues and don’t represent content that I actually follow. I’m more careful these days to test in a temporary database as to avoid contamination. Some are duplicates due to feeds changing URLs over the years. Some are artifacts from old bugs. This all represents a bit of noise, but should be negligible. During my analysis I noticed some of these anomalies and took a moment to clean up obviously bogus data (weird dates, etc.), all by adjusting tags.

The first thing I wanted to know is the weekday frequency. A number of times I’ve blown entire Sundays working on Elfeed, and, as if to frustrate my testing, it’s not unusual for several hours to pass between new entries on Sundays. Is this just my perception or are Sundays really that slow?

Here’s my query. I’m using SQLite’s strftime to shift the result into my local time zone, Eastern Time. This time zone is the source, or close to the source, of a large amount of the content. This also automatically accounts for daylight savings time, which can’t be done with a simple divide and subtract.

The most frequent tag (13,666 appearances) is “youtube”, which marks every YouTube video, and I’ll use gnuplot to visualize it. The input “file” is actually a command since gnuplot is poor at filtering data itself, especially for histograms. 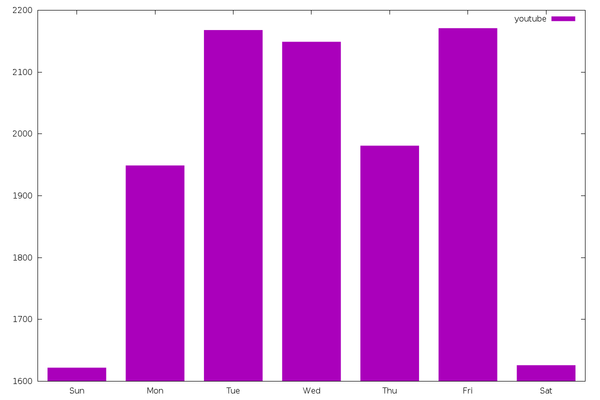 Wow, things do quiet down dramatically on weekends! From the glass-half-full perspective, this gives me a chance to catch up when I inevitably fall behind on these videos during the week. 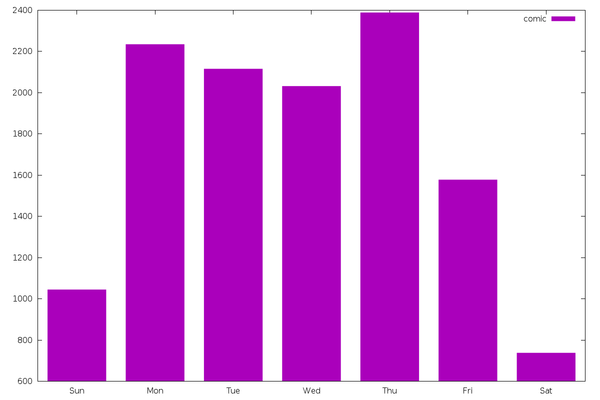 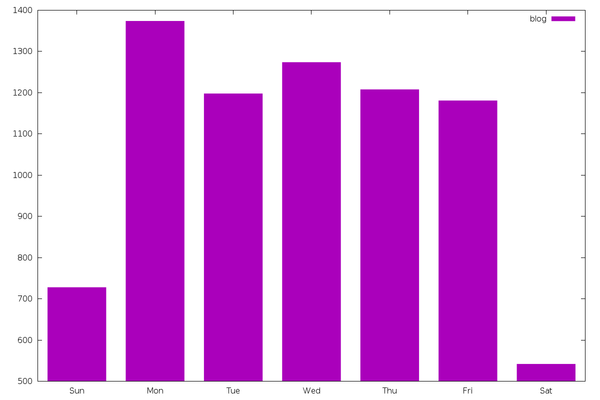 However, “emacs” (2,404 entries) is a different story. It doesn’t slow down on the weekend, but Emacs users sure love to talk about Emacs on Mondays. In my own index, this spike largely comes from Planet Emacsen. Initially I thought maybe this was an artifact of Planet Emacsen’s date handling — i.e. perhaps it does a big fetch on Mondays and groups up the dates — but I double checked: they pass the date directly through from the original articles.

Conclusion: Emacs users love Mondays. Or maybe they hate Mondays and talk about Emacs as an escape. 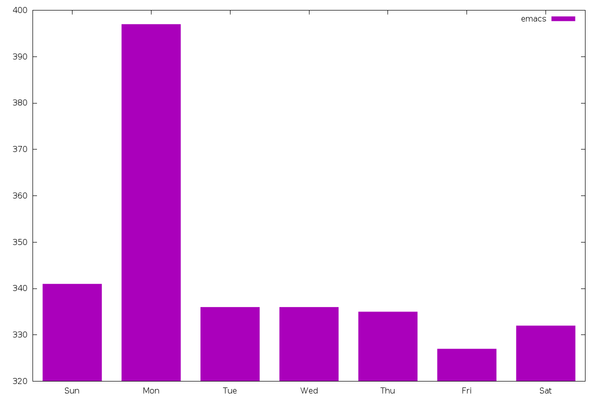 I can reuse the same query to look at different time scales. When during the day do entries appear? Adjusting the time zone here becomes a lot more important.

Emacs bloggers tend to follow a nice Eastern Time sleeping schedule. (I wonder how Vim bloggers compare, since, as an Emacs user, I naturally assume Vim users’ schedules are as undisciplined as their bathing habits.) However, this also might be prolific the Irreal breaking the curve. 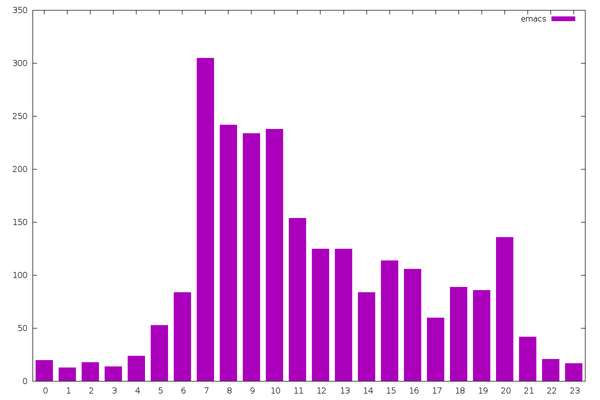 The YouTube channels I follow are a bit more erratic, but there’s still a big drop in the early morning and a spike in the early afternoon. It’s unclear if the timestamp published in the feed is the upload time or the publication time. This would make a difference in the result (e.g. overnight video uploads). 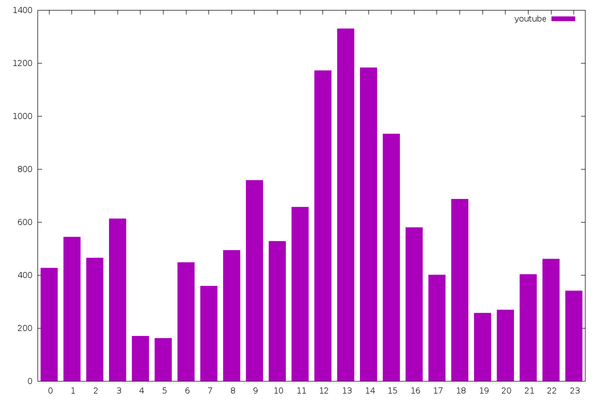 Do you suppose there’s a slow month?

December is a big drop across all tags, probably for the holidays. Both “comic” and “blog” also have an interesting drop in August. For brevity, I’ll only show one. This might be partially due my not waiting until the end of this month for this analysis, since there are only 2.5 Augusts in my 3-year dataset. 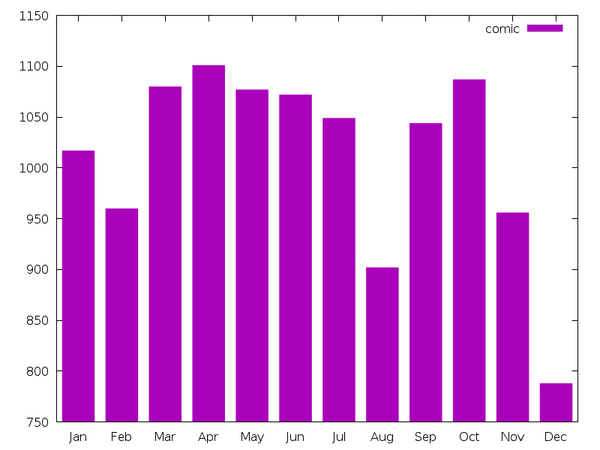 Unfortunately the timestamp is the only direct numerical quantity in the data. So far I’ve been binning data points and counting to get a second numerical quantity. Everything else is text, so I’ll need to get more creative to find other interesting relationships.

So let’s have a look a the lengths of entry titles.

The shortest are the webcomics. I’ve complained about poor webcomic titles before, so this isn’t surprising. The spikes are from comics that follow a strict (uncreative) title format. 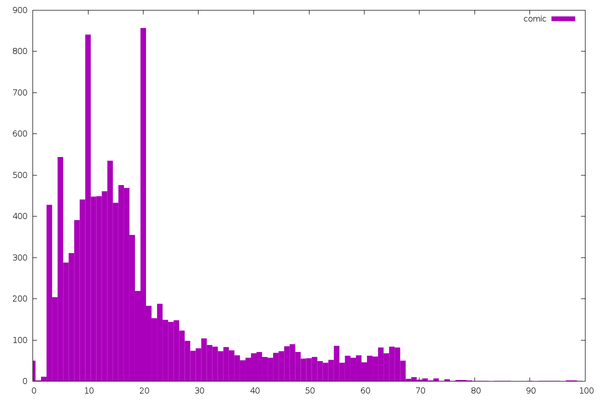 Emacs article titles follow a nice distribution. You can tell these are programmers because so many titles are exactly 32 characters long. Picking this number is such a natural instinct that we aren’t even aware of it. Or maybe all their database schemas have VARCHAR(32) title columns? 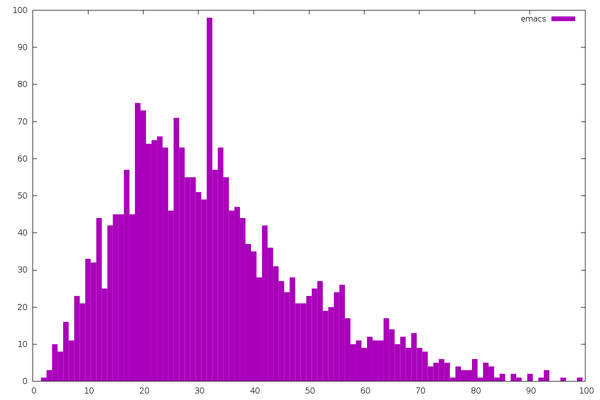 Blogs in general follow a nice distribution. The big spike is from the Dwarf Fortress development blog, which follows a strict date format. 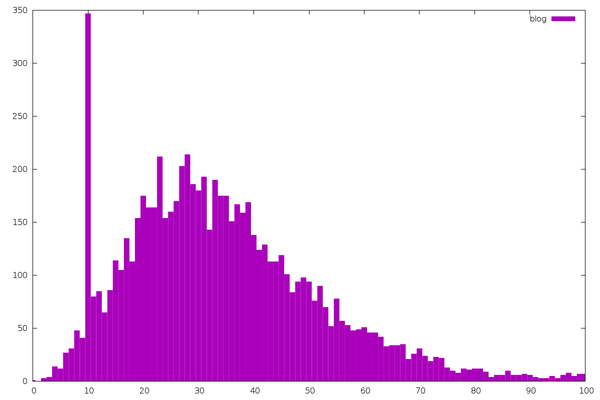 The longest on average are YouTube videos. This is largely due to the kinds of videos I watch (“Let’s Play” videos), which tend to have long, predictable names. 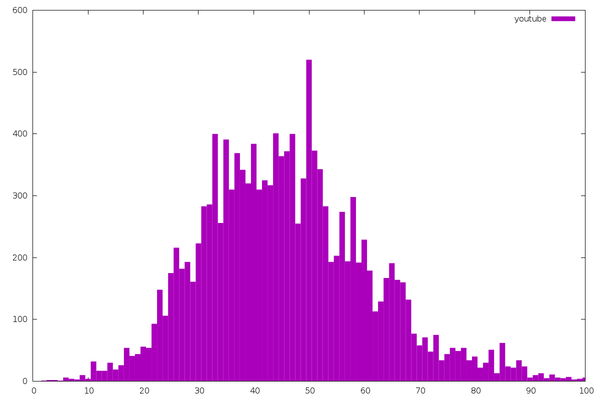 And finally, here’s the most interesting-looking graph of them all.

This is the title length versus time of day (not binned). Each point is one of the 53,360 posts.

(This is a good one to follow through to the full size image.)

Again, all Eastern Time since I’m self-centered like that. Vertical lines are authors rounding their post dates to the hour. Horizontal lines are the length spikes from above, such as the line of entries at title length 10 in the evening (Dwarf Fortress blog). There’s a the mid-day cloud of entries of various title lengths, with the shortest title cloud around mid-morning. That’s probably when many of the webcomics come up.

Additional analysis could look further at textual content, beyond simply length, in some quantitative way (n-grams? soundex?). But mostly I really need to keep track of more data!