I’ve noticed a small pattern across a few of my projects where I had vectorized and parallelized some code. The original algorithm had a “push” approach, the optimized version instead took a “pull” approach. In this article I’ll describe what I mean, though it’s mostly just so I can show off some pretty videos, pictures, and demos.

A good place to start is the Abelian sandpile model, which, like many before me, completely captured my attention for awhile. It’s a cellular automaton where each cell is a pile of grains of sand — a sandpile. At each step, any sandpile with more than four grains of sand spill one grain into its four 4-connected neighbors, regardless of the number of grains in those neighboring cell. Cells at the edge spill their grains into oblivion, and those grains no longer exist.

With excess sand falling over the edge, the model eventually hits a stable state where all piles have three or fewer grains. However, until it reaches stability, all sorts of interesting patterns ripple though the cellular automaton. In certain cases, the final pattern itself is beautiful and interesting. 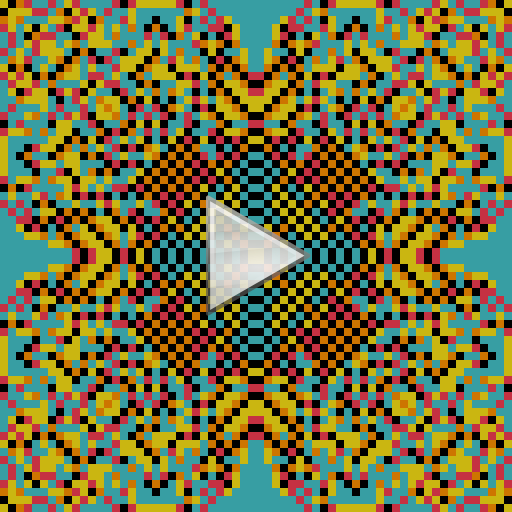 As a fractal, the larger the grid, the more self-similar patterns there are to observe. There are lots of samples online, and the biggest I could find was this 3000x3000 on Wikimedia Commons. But I wanted to see one that’s even bigger, damnit! So, skipping to the end, I eventually computed this 10000x10000 identity configuration: 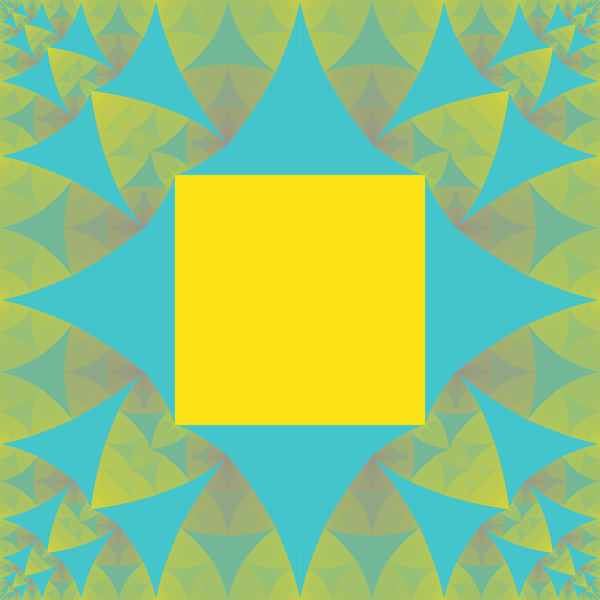 This took 10 days to compute using my optimized implementation:

I picked an algorithm described in a code golf challenge:

Where f() is the function that runs the simulation to a stable state.

So, what do I mean about pushing and pulling? The naive approach to simulating sandpiles looks like this:

As the algorithm examines each cell, it pushes results into neighboring cells. If we’re using concurrency, that means multiple threads of execution may be mutating the same cell, which requires synchronization — locks, atomics, etc. That much synchronization is the death knell of performance. The threads will spend all their time contending for the same resources, even if it’s just false sharing.

The solution is to pull grains from neighbors:

Each thread only modifies one cell — the cell it’s in charge of updating — so no synchronization is necessary. It’s shader-friendly and should sound familiar if you’ve seen my WebGL implementation of Conway’s Game of Life. It’s essentially the same algorithm. If you chase down the various Abelian sandpile references online, you’ll eventually come across a 2017 paper by Cameron Fish about running sandpile simulations on GPUs. He cites my WebGL Game of Life article, bringing everything full circle. We had spoken by email at the time, and he shared his interactive simulation with me.

Vectorizing this algorithm is straightforward: Load multiple piles at once, one per SIMD channel, and use masks to implement the branches. In my code I’ve also unrolled the loop. To avoid bounds checking in the SIMD code, I pad the state data structure with zeros so that the edge cells have static neighbors and are no longer special.

Back in the old days, one of the cool graphics tricks was fire animations. It was so easy to implement on limited hardware. In fact, the most obvious way to compute it was directly in the framebuffer, such as in the VGA buffer, with no outside state.

There’s a heat source at the bottom of the screen, and the algorithm runs from bottom up, propagating that heat upwards randomly. Here’s the algorithm using traditional screen coordinates (top-left corner origin):

As a push algorithm it works fine with a single-thread, but it doesn’t translate well to modern video hardware. So convert it to a pull algorithm!

Cells pull the fire upward from the bottom. Though this time there’s a catch: This algorithm will have subtly different results.

In the end it’s hard to tell the difference, so this works out. 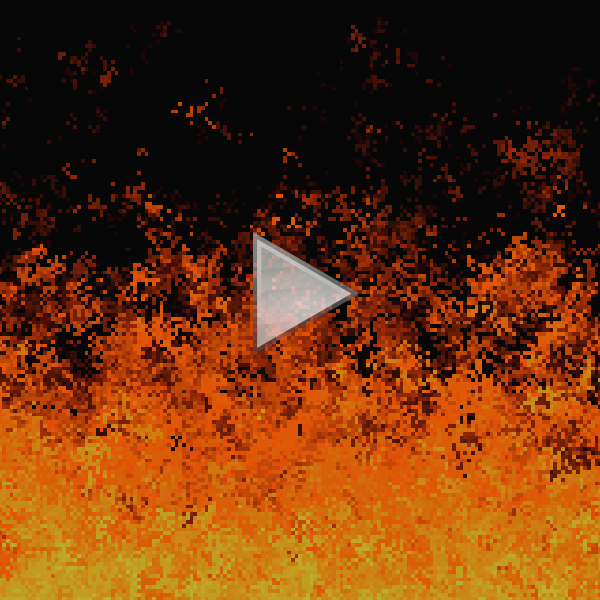 There’s still potentially contention in that rand() function, but this can be resolved with a hash function that takes x and y as inputs.